Country comes to town in a Southdowns farmhouse

The home and surrounding 30-acre farm were initially known as White Haven, and the adjacent street was named for the property. Though additions and renovations were completed over the years, the original asbestos slate roof has endured. “We were told it could last another 100 years,” says Casey. Photos by Melissa Oivanki.

She had walked through the old house and immediately fallen in love with the original Queen Anne-style windows and their view of the big backyard. But she had noticed other things, too. Things that worried her. Things like a “dormitory”-style second story with dark plank walls. Ancient electrical wiring. An outdated bathroom and a closed-off kitchen.

But the real estate market was hot, and Casey and her husband Mike had to make a decision fast or risk losing the house altogether.

“I was freaking out,” Casey recalls. “I didn’t sleep at all. For probably about eight hours I was thinking maybe it was too much.”

It took some expert advice to ease her mind. Contractor Harwood Leonard and interior designer David Coco stood with the couple inside that kitchen and surveyed the scene. “They told us the house was really too good to pass up,” says Casey. “Harwood said you could never recreate something like this.”

So with the blessing of those trusted professionals with whom the couple had previously collaborated, the Marantos became the owners of one of the earliest-built homes in Southdowns—a home, in fact, that the neighborhood had been built around and a street named after. And despite her initial worries, Casey looks back a year later and says the house has become the perfect place for her family.

When it was built close to a century ago, the Marantos’ home was situated on what had been a 30-acre farm and dubbed “White Haven.” Over the years, parcels of land were sold off until only a 1-acre lot remained with the original house. The structure itself also saw a few changes to keep up with the times, including a new outdoor

kitchen and pool area as well as a kitchen renovation. But each owner was careful to preserve the home’s architectural integrity.

That’s why the Queen Anne windows and oak floors were still pristine and the arched doorways were still in place when the Marantos first walked through the front door. They were then living in another older home in the Hundred Oaks area, but the family was literally outgrowing that space.

“Our sons, Mac and Sam, were getting a little older, and they could hit the baseball out of the backyard,” Mike says. “We just needed something a little bigger.”

After purchasing the house in the spring of 2014, the Marantos decided to tackle the remodeling project before moving in with their young sons, who are now 6 and 7 years old. With help from Leonard and Coco, they embarked on a quest to update the upstairs bedrooms and bathroom while making mostly cosmetic changes on the first floor.

To achieve the “comfortable and casual” look Casey sought, she worked closely with Coco to choose fabrics and furnishings that would be both practical and polished.  “We know each other well,” Casey says of the designer. “He is great to work with. His personality turns what could be stressful decisions into a seemingly effortless and fun
experience.”

Throughout the process, Casey says she admired Coco’s ability to adapt his design to the home’s original style. Upstairs, he had thousands of nails—once used to attach wallpaper—removed from the horizontal wall planks, and then he repainted the wood white to brighten the small spaces. The second-floor bathroom got a cheery makeover with blue and white octagon-and-dot floor tiles and blue cabinetry.

To make the kitchen feel less confined, the team decided to create a countertop opening between it and the adjacent dining room. Instead of trying to match the marble, they simply popped down the existing backsplash to create the counter surface. Dark walls downstairs were repainted in brighter hues, and light-colored linen curtains softened the walls without obstructing the views or obscuring the windows.

The backyard proved to be a challenge as well as a treasure hunt. Former owners had been avid gardeners and had put in overflowing azalea beds, more than 100 camellias, and “aspidistra everywhere” instead of a true lawn, Mike says. A few large water oaks were removed, along with some of the shrubbery, to make room for enough green space for little boys to hit baseballs and run around. As the plantings were thinned, Mike discovered several large old farm tools nestled into the soil, proof of the property’s original purpose. “Those were interesting to find,” he says.

The kids now have a treehouse, bridge and zip line to bring their imaginations to life outdoors, and they also enjoy pool parties with friends. But the fun isn’t only for kids—this family loves entertaining of any kind. “The house is great for any size party, and we have had them all—from sit-down dinners with a private chef to kids’ birthday parties roasting s’mores over the firepit,” Mike says. “There’s lots of space for it—lots of parking and lots of room to move around.”

Now that the family is comfortably settled in, Casey is glad she was eventually convinced to take a chance on an old house in the middle of town. “We really appreciate all the mature live oaks,” she says. “And being centrally located and so close to the school is great. It’s just such a great house with kids.”

Click on the photos in the gallery below for a closer look at this historic home: 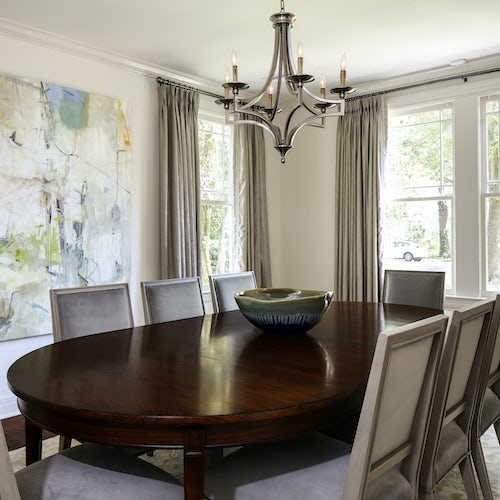 Dark gray walls were brightened up in the dining room, which now features a colorful abstract painting by Rhenda Saporito. The metallic linen drapes match the window coverings in the living room. 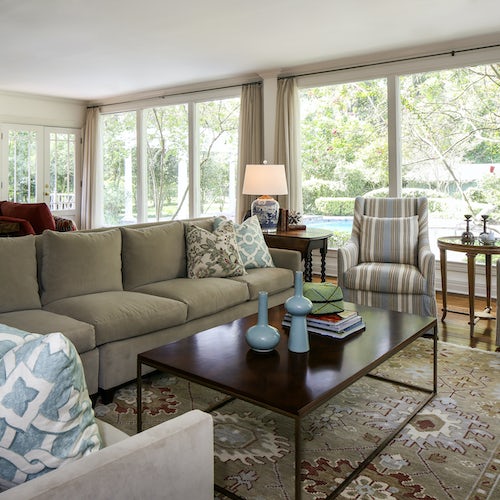 The previous owners had used this space for dining, but the Marantos shifted its purpose to a cozy family seating area. Mike says the sectional sofa here is one of his favorite new furniture pieces. “There’s enough room for the entire family to enjoy a movie in comfort,” he says. 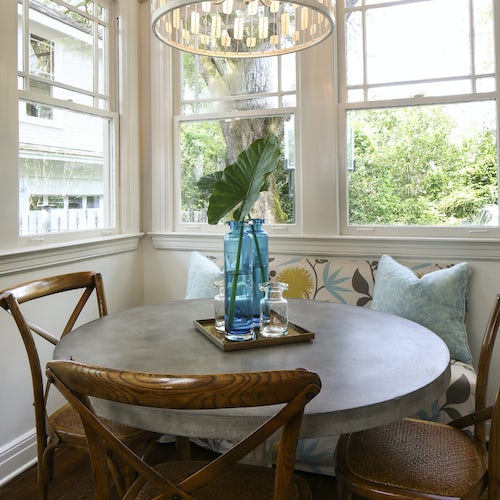 A small office nook was transformed into the breakfast area with the addition of a round table and a bench upholstered in washable printed fabrics. “This location in the house is a great, quaint space for meals when it’s just us,” says Casey. “Being able to see the oaks and the yard through the windows makes me appreciate our home and family.” 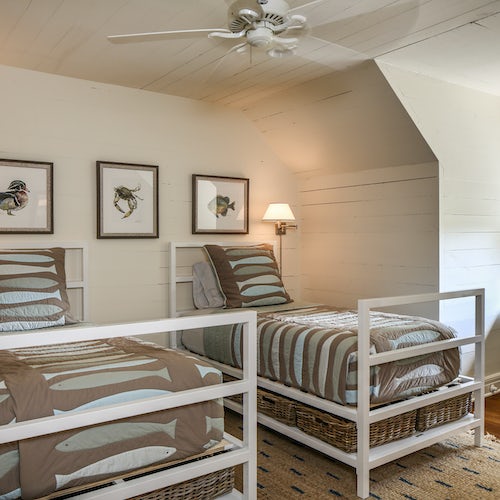 The upstairs bedrooms still sport the wood-paneled walls that hark back to the home’s early days, but their dark surface is now brightened by crisp white paint. Serena and Lily beds provide storage for the boys’ books and special toys. 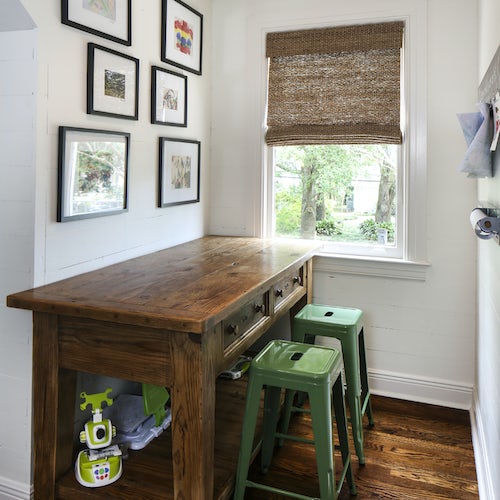 The boys’ playroom features an art station that once served as a kitchen island. “We had to take it apart to get it up the stairs,” says Mike. 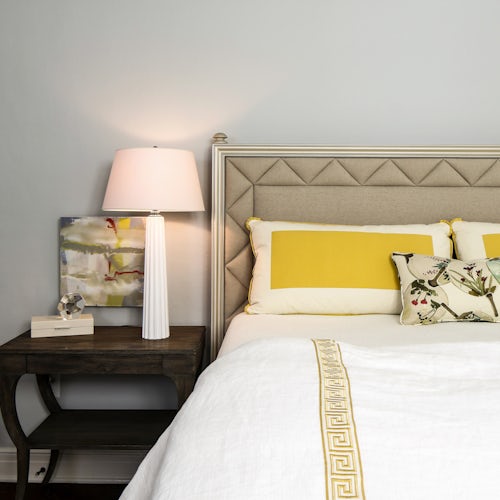 Instead of a single large artwork over the bed, the Marantos opted for complementary paintings by Texas artist Austin James over each bedside table. The diamond-tufted bed is dressed with a Greek key-trimmed duvet from Custom Linens.