All together now: A renovated home holds gatherings of multiple generations

Front doors are fine for FedEx deliveries, but at Cindy and Johnny Barksdale’s Bocage neighborhood home, those in the know head around back.

“We call this our friends entrance,” Shannon Mahon says as she directs a visitor past the Barksdales’ new porte-cochère and through an adjacent archway that leads to a cozy courtyard. “We almost never use the front door. I feel like this really creates a warm and cozy feel as you’re entering the house.”

Shannon brought plenty of inside knowledge to this renovation project. After all, she’s more than the owner of local design firm Shannon Mahon Interiors; she’s also the Barksdales’ daughter, and she lived within these walls during her teenage years after her parents purchased the house in 1993. But when the Barksdales recently decided to do some updates, Shannon wasn’t the only one on the makeover team who was intimately familiar with how the couple wanted their residence to function. Contractor Carter Hill, husband to the Barksdales’ daughter Lauren Barksdale Hill, took on the construction of the project, and close family friend Mike Sullivan tackled the architectural changes. “It was really fun for all of us to work together,” Shannon says.

It was the dawn of a new chapter in a story that almost never got started. “At first, I didn’t even want to go and look at this house when it was for sale back in the early ’90s,” admits Cindy. “There had been only one previous owner, and the house was on the market for a long time. I saw the pictures, and everything just felt so dark. I wasn’t sure it was going to work for us.”

But eventually she came around, and her enthusiasm for the area won out over her skepticism about the home’s potential. “We love this neighborhood,” Cindy says. “It’s so centrally located, and there are lots of people who live near us that we’ve known through the years.”

With a family of six under this roof, the Barksdale home quickly became a hub of activity. “This was just kind of the house everybody hung out in,” Cindy says.

And even as the children grew up and started families of their own, there was still rarely a quiet moment. A growing number of young grandchildren—the count is now six between the ages of 6 and 10—took over the backyard escapades, while their parents and grandparents hung out in the narrow galley kitchen. That’s when it became clear that this home was ripe for a redo.

“This is a large family—lots of kids, lots of grandkids, and we do lots of entertaining,” Shannon says. “There are always people here, so we wanted to make sure we kept that in mind with all of the design elements.”

With a lot of people come a lot of cars, so the renovation team approached this project from the outside in. “The first thing we decided to tackle was the parking,” Shannon says. “Being on a corner lot, everybody lined up along the street, but we wanted to incorporate a place where our friends and family could park.”

Enter the porte-cochère, that classic French structure that literally translates to “carriage entrance” and provides stylish shelter to those exiting vehicles outside homes all around south Louisiana. In adding one to the side driveway, the pros were careful to consider how it would visually link to the house. “It was really important for us to make sure the porte-cochère looked like it was part of the original home and not just an addition,” Shannon says. “We picked out beautiful old brick that matched the brick on the house, and we also hand-selected each antique slate tile to tie in with the existing slate roof.”

Like the original French porte-cochères in Louis XIV’s time, this one leads to a private courtyard, via one side of that newly constructed “friends entrance.” Makaira Landscape and Pools transformed what had been a basic backyard by installing all new plantings, replacing the grass with artificial turf and tile in a diamond grid pattern, and upgrading the pool.

Inside the house, the renovation allowed for a new rear entry hall, an enlarged kitchen and a glammed-up bar area complete with a settee designed for sipping cocktails. A smaller “back kitchen” with double ovens, a dishwasher, a sink and a refrigerator was tucked away behind a pocket door, and the former breakfast room became a cozy new sitting area. “We wanted a bigger kitchen and spaces where we could all be together comfortably,” Cindy says. “We really wanted to open up the space and make it flow better.”

Retaining original elements including coffered ceilings, paneled walls and brick floors, Shannon sought to meld the home’s classic aesthetic with more modern touches. When it was time to decorate, finding the perfect pieces was easy—along with the Barksdales’ existing collection of antiques, new furnishings and accents came from Mint, the local shop Shannon and Lauren own. From alligator to velvet to metals, Shannon sought to spice up the soft color palette with a mix of textures. The finishing touches are a host of paintings by Lauren among pieces by other Louisiana artists. “We wanted to keep true to the fact that this is a very traditional-style home, but we wanted to incorporate transitional elements as well,” Shannon says.

The Barksdales braved the construction process, staying in the house through about nine months of dust and hammering. And yet Cindy’s memories of the experience are good ones. “The renovation was actually very easy,” she attests. “We lived here with no kitchen, with just an ice chest to keep cold drinks, but everything went really smoothly.”

Now completed, the house remains a haven for family members and friends to gather—especially during non-pandemic times, of course. The living room is filled with giddy kids on Christmas morning, and summer afternoons often see Shannon and her sisters cranking open the new kitchen window to pass Popsicles to the kids playing outside. The quartzite kitchen countertops are tough enough to handle any spills little hands can dish out, and even the new upholstered seating pieces were carefully planned to be impervious to mishaps. “They really live in this house,” Shannon says. “It’s usually pretty wild over here.”

And that’s just the way Cindy and Johnny like it—with laughter and good times as vital to their home’s next chapter as the new walls in which these memories are being made.

“We do love to entertain, and we love to get together with not just our family but also our close friends,” Cindy says. “Everybody is so busy these days, but we really try to make a point to spend as much time as we can together.”

Get a closer look at more rooms from this renovated home by clicking on the photos in the gallery below: 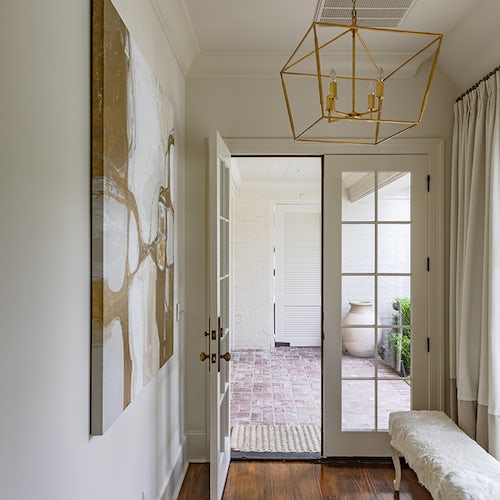 Shannon gave this new rear foyer as much design importance as the one in front, since this is where most visitors enter. A painting by Kelly O’Neal hangs opposite a goat hair-covered antique bench, and an angular open lantern fixture adds to the abundant natural light in this space. 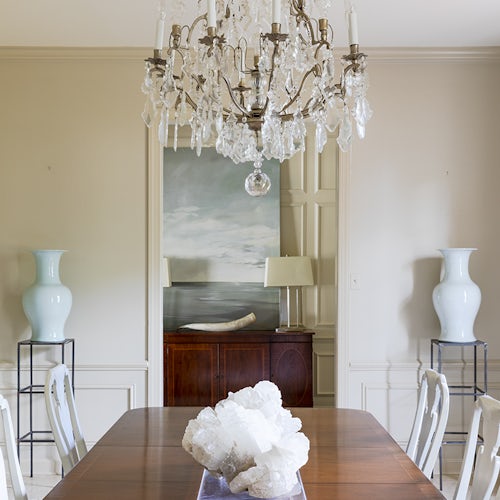 The home’s original crystal chandelier, brightened up with a new champagne finish, hangs in the formal dining room. “This dining table was one of the first pieces we splurged on,” says Cindy; its original chairs were painted and got new upholstered seats as part of the renovation. From this room, guests can see into the front entryway, which still wears its original paneled walls, though now topped by a painting by Lauren. 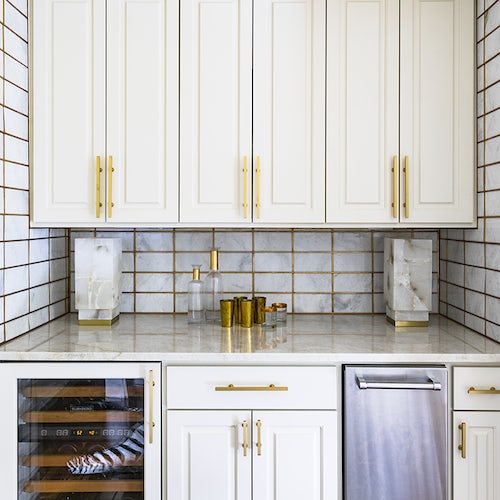 Opposite a new cocktail seating area is this built-in bar station featuring a marble and glass backsplash created with help from Scott Distefano of Distefano Designs & Fabrication. 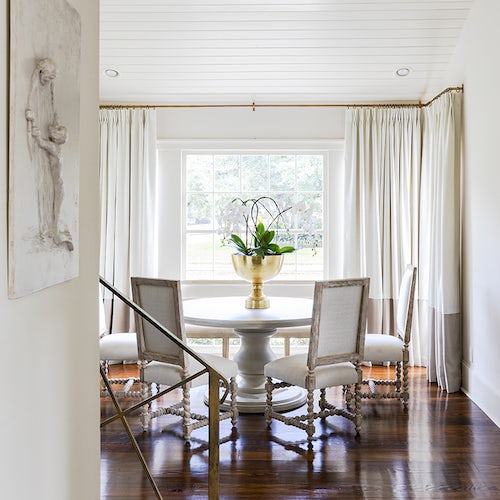 Framed by a sun-filled bay window, a round pedestal table ideal for family conversation is the centerpiece of the new shiplap-ceilinged breakfast room. On the wall leading into this space is a relief sculpture of the prodigal son by local artist Deborah Luke; this special piece was given to the Barksdales after their son Adam passed away. 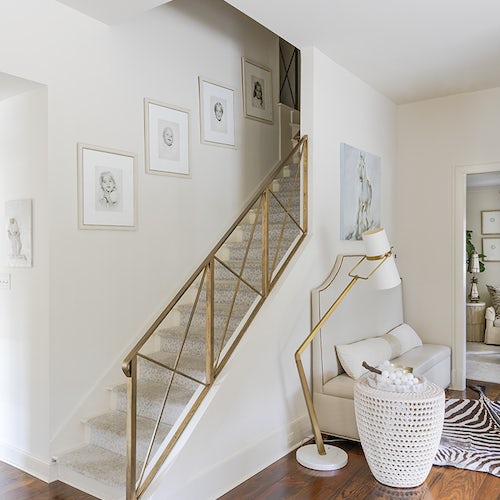 Fonville Winans photos of the couple’s children hang above the staircase, which was made over by removing a solid wall and replacing it with a custom-designed railing made with assistance from Scott Distefano. Beside the staircase is a space designed for catching up over cocktails, with a custom banquette accented by a crocodile-banded bolster pillow. 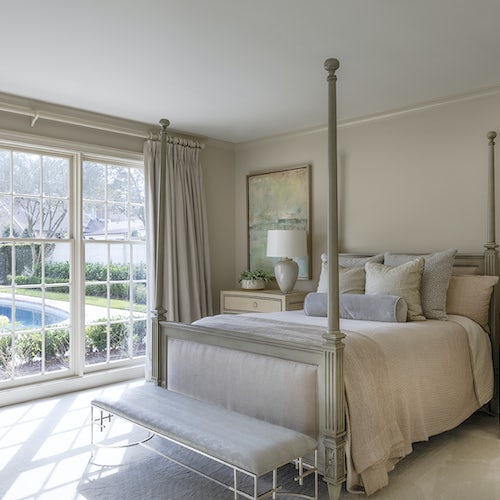 Neutral tone-on-tone fabrics and finishes give a soothing feel to the master bedroom, which overlooks the renovated pool. This room and every part of the house were painted in Benjamin Moore’s “Manchester Tan,” in varying strengths depending on the amount of natural light each space receives. 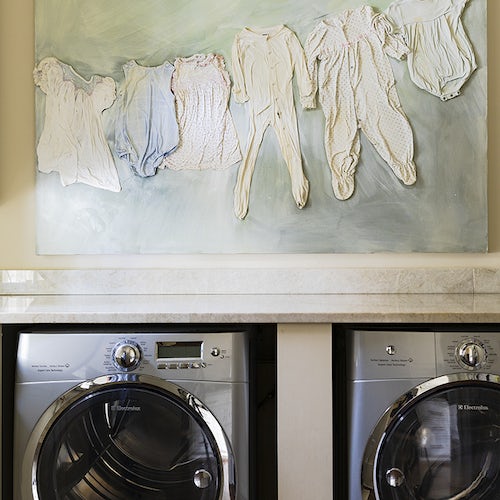 A cheerful three-dimensional artwork, made by Lauren using all of the Barksdales’ grandchildren’s baby clothes, helps lighten the proverbial load on laundry day.