Once you’ve tried cooking with fresh pasta, it’s really hard to go back.

That’s according to Pam Cannatella, owner of Cannatella Grocery, who has been helping convert her customers to fresh pasta since last fall.

“We sell a lot of dry pasta, and then people started asking about fresh pasta,” Cannatella says. “So I started experimenting, and we just grew from there.”

The nearly 100-year-old grocery store in Melville opened its first Baton Rouge location in 2019, bringing its Cajun and Italian specialty projects to the Mid City neighborhood. Although the grocery’s homemade Italian dishes are based on old family recipes, the pasta recipe was a new addition by Cannatella herself. 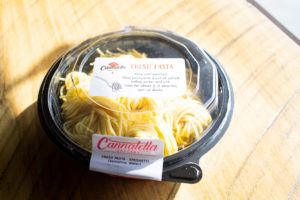 To keep the noodles simple and fresh, the store uses an egg-free formula of only flour and water. The flavored noodles—such as the best-selling spinach, roasted red pepper, beet, and tomato and garlic—all incorporate fresh produce. Customers have even told Cannatella they use the flavored noodles as a way to get their kids to eat vegetables. It’s motivation to experiment and keep things fun. “I’ve tried to make different colors with all-natural ingredients,” Cannatella says. 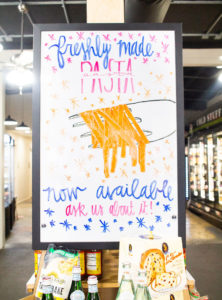 The grocery now makes about 40 pounds of fresh pasta per week. The pasta is sold fresh in the refrigerated section. The noodles have a shelf life of five days, although they can also be frozen.

To make the pasta, Cannatella pulverizes the fresh produce and combines it with water. Then, she works the liquid into the flour. The dough is extruded through bronze dies. This process gives the pasta its rougher texture, which helps sauces better stick to the noodles. One batch takes about 20 minutes to make. It’s a time-consuming process, but Cannatella enjoys it.

“When [we] started [selling pasta], I was making it, and I enjoyed making it,” Cannatella says. “It’s therapeutic.”

Cannatella Grocery is at 3869 Government Street. To place an order or learn more, call 218-4361 or visit cannatellagrocery.com.

This story was originally published in 225 magazine.