inRegister founders Chris Russo Blackwood and Wanda Horn, in a photo from the premiere issue in 1989

In 1989, two newspaper editors cleaned out their desks and left the newsroom for the last time. Wanda Horn and Chris Russo Blackwood had a new venture in mind, but they were following a path forged by another Baton Rouge media pioneer more than 40 years earlier.

You see, to understand the story of inRegister magazine, you must first know about The Register magazine, launched by Orene Muse in the late 1940s. Muse herself was a former newspaper society page editor, and, like Blackwood and Horn later would, she saw a demand for a publication focused on the city’s interesting people and unique events. The Register remained on newsstands and in mailboxes until 1980, when Muse hung up her famous hat.

In the decade that followed, Horn and Blackwood were pondering the possibilities of going beyond the limitations of their own roles at The Morning Advocate’s People section. “There was very little happy news during that time,” Blackwood recalls. “For years, we thought about starting our own magazine, because we knew there was a need for people-centric stories. We felt strongly about the concept, and finally we jumped off the diving board, with a lot of support from the community.”

With Muse’s blessing but no official connection to The Register, Horn and Blackwood stepped into the new project with their own collection of headwear inspired by their predecessor. The name they gave the new magazine, inRegister, was both a play on the former publication’s title and an homage to the printing term “in register,” which refers to the proper alignment of a page when multiple colors are printed together.

From the beginning, the pages of inRegister were filled with stories about “fashion, people, weddings, health, food, the arts and the social scene,” as Blackwood wrote in the first editor’s note. Photos from galas and luncheons shared space with profiles of some of the city’s most famous faces—as well as some of its more obscure.

“We were meeting people who were catalysts for change in our community,” Blackwood explains. “There were times we felt like we were part of history. But we also loved to spotlight our readers, because everybody has an interesting story. I think that was and is at the crux of the whole magazine—it’s all about interesting people.”

Like Muse before them, Horn and Blackwood later expanded their brand to include broadcast as well as print. Muse had helmed a radio program on WJBO as well as a TV show on WAFB, and the inRegister duo brought their coverage of local events to a broader audience beginning in 1995 with the TV show inRegister OnTheAir. The show continued until Horn’s death in 1997.

In 2009—just in time for its 20th anniversary—inRegister was acquired by Louisiana Business Inc., publishers of the Greater Baton Rouge Business Report and 225 magazines. Current publisher and editor Ashley Sexton Gordon leads a team that remains focused on covering the people who make the Capital City an extraordinary place to live. The focus has been honed to increase the magazine’s coverage of the arts, philanthropy, health, travel and homes, as well as food and entertaining. A weekly email newsletter, [email protected], now delivers bonus feature stories on a variety of topics to inboxes every Thursday.

The bottom line: inRegister is much more than a social magazine. And these efforts are getting noticed beyond the borders of Baton Rouge. For its compelling cover images, humorous commentary and feature articles, the magazine has earned regional and national recognition from the Society of Professional Journalists and the Society for Features Journalism.

“For a long time, there was not really anything like this magazine to chronicle the people and events that were changing our city for the better,” says Blackwood. “I’ve always seen inRegister as presenting a cultural history of Baton Rouge that is documented nowhere else.”

Check out a sampling of covers from inRegister’s first 30 years below: 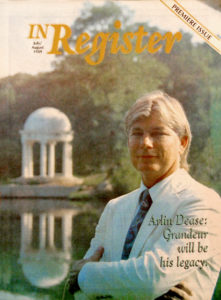 The very first cover featured Arlin Dease, the creator of a newly opened 238-acre West Feliciana retreat called Hemingbough, and the inaugural issue was unveiled at that scenic spot. Brides and grooms as well as vacationers would soon make Hemingbough a popular destination not far from the city. 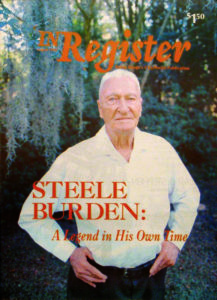 If you’ve visited the urban oasis that is the LSU AgCenter Botanic Gardens off Essen Lane, you have the late landscape architect Steele Burden and his sister Ione, who donated hundreds of acres to LSU, to thank. Burden stood beneath an oak dripping with Spanish moss for this cover, published five years before his death. 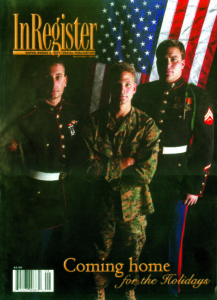 Six months after President George W. Bush declared major combat operations over in Operation Iraqi Freedom, three local men who had returned to Baton Rouge from the Middle East were pictured on the inRegister cover. Jared Jones, Drew Fourrier and Brandon Dufrene were in the holiday spirit. “Your family is all you think about when you’re over there,” Dufrene told the magazine.

A Bevy of Builders 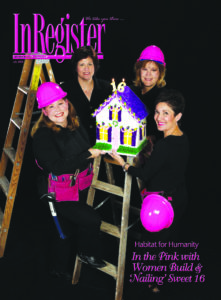 Swinging a hammer was all in a day’s work for the Habitat for Humanity volunteers featured in this issue. They were part of the organization’s “Women Build” initiative, which constructs homes for mothers and children using all-female crews. 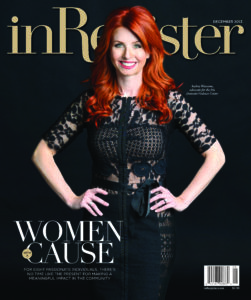 Since 2011, inRegister has highlighted local volunteer activists making a difference through the magazine’s “Women with a Cause” features. The 2013 cover subject was Audrey Wascome, who turned her own traumatic past into a passion for helping victims of sexual assault and domestic violence. 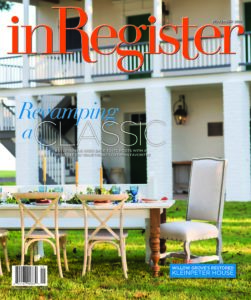 Before there was a Bistro Byronz or even a red light on Perkins Road, there was the Kleinpeter House, built in 1820 in the heart of what is now The Settlement at Willow Grove neighborhood. This cover story chronicled the loving restoration of the historic home by Kleinpeter family descendants.