Family tradition: A classic Southern home is customized with familial inspirations in mind

Designer Meghann Landry of McMillin Interiors helped Frances and Mike Balhoff infuse their home with beloved blue hues, from velvet chairs to botanical textiles. Hints of plum bring a touch of warmth into this living room. Photos by Melissa Oivanki

Blue botanical curtains framed Frances and Mike Balhoff’s view out into Baton Rouge on their visits from their home in Maryland. During each trip, the couple was surrounded by shades of sapphire, cerulean and navy in the guest room of Mike’s brother Bill’s lakefront home. Perhaps the hue, evocative of Louisiana’s proximity to the turquoise waters of the Gulf of Mexico, came to characterize life in the Capital City. Or maybe the shades came to represent the cloudless skies of a carefree day. Either way, when the Balhoffs sat down with designer Meghann Landry of McMillin Interiors—the same visionary behind Bill Balhoff’s home—following the purchase of their new home off Bluebonnet Boulevard, they were adamant on their chosen color scheme: blue.

“Their house in Maryland is completely different,” says Landry, noting her history with many branches of the Balhoff family over the years. “They wanted something new for their life here, and they always stayed in the blue guest room at Mike’s brother’s. They were inspired by that.”

Work started in the fall of 2019 when the world was blissfully unaware of the impending pandemic and the interruptions that it would cause in the interior design supply chain. While Joe Burrow and the Tigers were playing their way to a national championship, Landry was painstakingly bringing together an ocean-hued vision through hand-embroidered fabrics, velvet throw pillows and plenty of art. Luckily, the orders were placed and the entire house worth of details was ready for install by mid-pandemic (because who remembers the months anymore), aligning perfectly with the Balhoffs’ move down south.

“The timing could not have been better,” recalls Landry. “One of the main selling points of the house was that it didn’t require a major renovation, which ended up working out perfectly with the COVID situation.”

Despite the home being built a little less than a decade prior, the flow of its rooms speaks to an older home, one untouched by trends. Smaller, cozy spaces open up to one another, allowing the house to accommodate both private living spaces for the family as well as large gatherings with relatives and friends.

“An open floorplan doesn’t always end up functioning well, and I think people became acutely aware of that during the pandemic,” explains Landry. “Especially in this space, separation makes sense, and it doesn’t stunt the house, it really makes it more livable.”

And while each area—from the sitting room off the foyer to the casual lounge towards the back of the house—has its own look and accents, cohesion remains with a wash of Benjamin Moore’s classic favorite “White Dove” throughout the entire home.

“We repainted everything to make it feel fresh,” says Landry. “We wanted something bright without being too white. This color has depth that works well with all of the furnishings we were bringing in.”

Most all the pieces were custom ordered, with Landry at the helm directing the transformation while the Balhoffs were still in Maryland. “They put a lot of trust in me,” Landry says.

The result is a collection of spaces that feel as thoughtful and functional as they do beautiful. The sectional in the back den area was ordered to perfectly fit the room. Pressed botanicals were commissioned by Landry to complete the serene look of the dining room. Pillows made out of the same curtain fabrics were stitched together to bring in the Balhoffs’ traditional style in a contemporary way.

But the biggest impact, Landry says, came from changing the lighting in a majority of the rooms. A crystal chandelier above the kitchen island was changed out for a simpler two-tier fixture. Above the dining table, two brass lanterns illuminate the space and bring continuity with the adjacent kitchen. And in the foyer, an iron pendant grounds light blue striped wallpaper that came with the house.

“The lighting was so important because it speaks to their personality and helps bring that into each room,” explains Landry. “It makes such a difference.”

While the house’s design, with its blue botanicals and soft takes on traditional, is inspired by Mike’s brother’s home, Landry says that, inevitably, this Balhoff family’s abode became something all its own.

“We were so excited to show them the finished product because it was a full transformation that made the house perfect for them,” Landry notes. “They wanted something they could just slip right into. It was such a fun surprise for them to see it all together.” 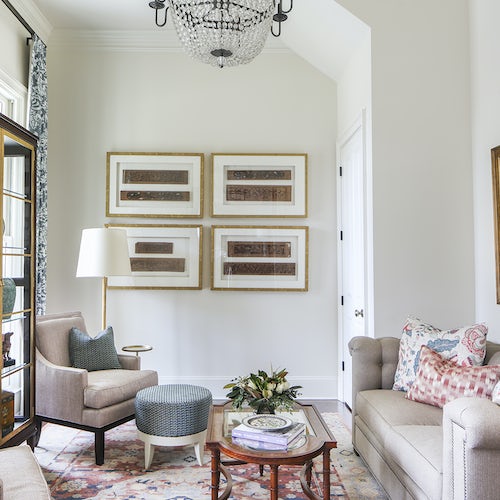 On the wall of this sitting room, antique fragments that the McMillin team sourced from an international market and had framed make a statement and give the room a collected feel, especially alongside a wood and brass cabinet filled with keepsakes. 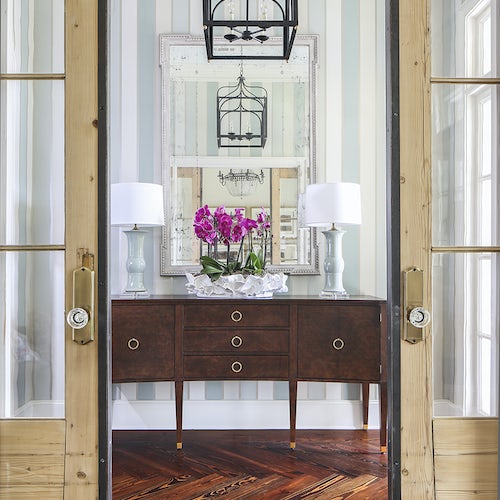 Light blue stripes have adorned this foyer since the home was built, as have the rustic doors that lead from the entry to a tucked-away sitting area. However, a new light fixture and a large mirror were brought in to freshen up the space. 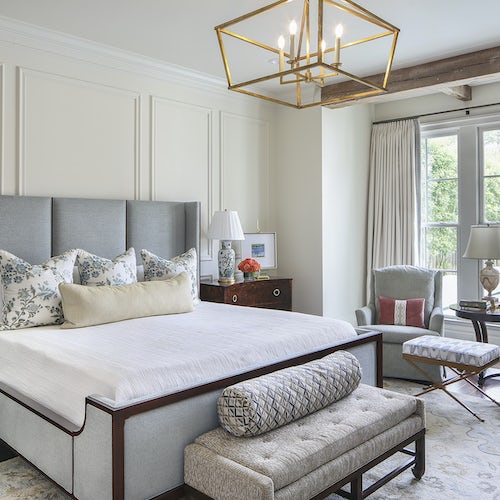 Sophisticated serenity characterizes the master suite. Masculine and feminine details go hand in hand, with dark wood side tables and a grey upholstered bed being softened by floral throw pillows and accent lamps. 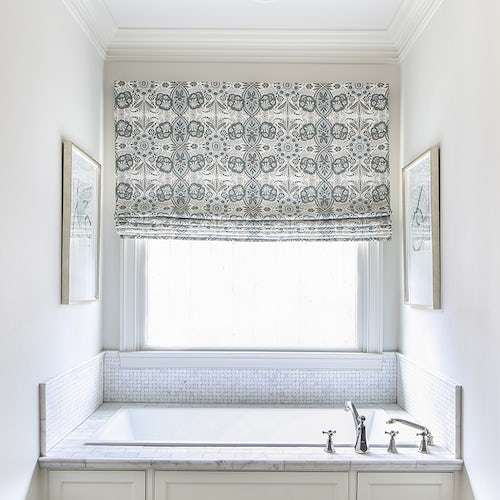 Even the master bathroom received a fabric makeover, with a blue and grey print adding something extra to the space alongside a brass and mirrored pendant. 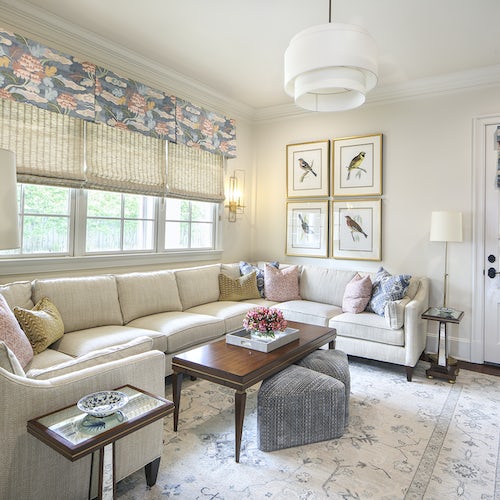 The comfortable rear den elicits an air of sophistication. Tailored window treatments keep with the home’s theme of eye-catching textiles. A custom-sized sectional optimizes seating, while birds on the back wall tie in the traditional-meets-modern mood of the entire home. 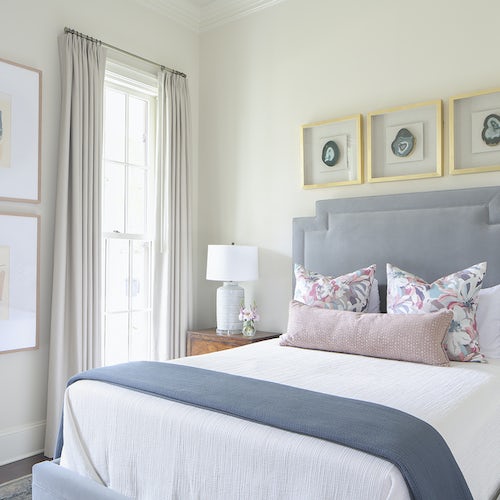 Slices of blue agate were framed by the McMillin team to bring a healthy dose of blue into this guest room. 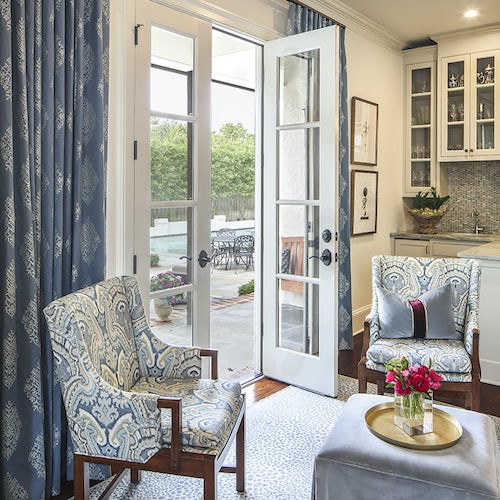 A wet bar creates the perfect entertaining space just off the pool. A mix of blue fabrics works to create a complex but visually satisfying look. Underfoot, blue animal print gives a dose of fun. 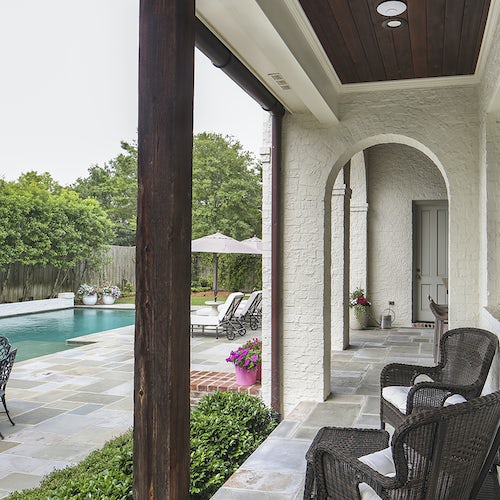 Plenty of wood, brick and slate pull together this outdoor space. A large pool provides entertainment for the Balhoffs’ big family.