All of the students of the 1934-35 school year pose in front of the school's original North Boulevard entrance with Monsignor Dominic Blasco. Photo courtesy Sacred Heart.

Sister Timothy. Sister Mary William. Sister Jeanne Therese. One by one, Louis DeJohn rattles off the names of each of the Sisters of St. Joseph who taught him during his elementary and middle school years as if he is being graded. The 1962 graduate of Sacred Heart of Jesus School hasn’t forgotten one moment of those formative days. Year after year, DeJohn relives them alongside his former classmates, as they meet in his backyard for their annual reunions.

“We have a 50 to 60% turnout for every party,” says DeJohn, who met his now wife Becky Bello DeJohn during his time at the school—she was one year behind him, graduating in 1963. “Sacred Heart means so much to us. It’s our common thread. We genuinely just enjoy seeing each other and talking about our memories, even if we say the same things every year. Those stories are still endearing.”

From the day Sacred Heart opened its doors in September of 1929, its halls have been filled with similar stories, despite the years that separate them. Stories of playground antics, lunchtime lectures and the enduring impact that a Catholic education has on the growth of the children who sit day after day in the rooms of the school, which is celebrating its 90th anniversary this year.

“Sacred Heart was such a big deal in molding me into who I am today,” DeJohn says. “Those black habits left a mark.” 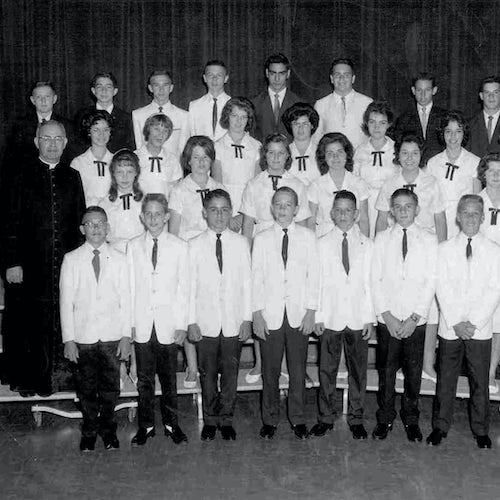 “If you want to keep your class together as long as we have, get yourself a Bernadette Denny,” Louis DeJohn says with a laugh. DeJohn’s former classmate takes turns, along with Suzette D’Amico, Daryl Sicard and many others, emailing and making phone calls to class alumni. Photo courtesy Louis DeJohn. 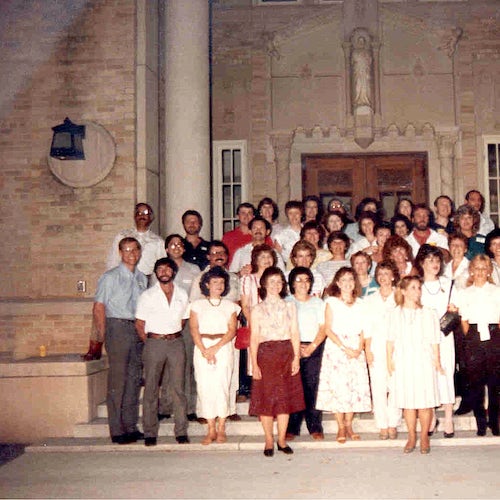 Members of the class of 1962 are pictured here at their graduation and again at one of their first reunions in 1992. Photo courtesy Louis DeJohn.

The parochial school system in Baton Rouge was the vision of Monsignor Francis Gassler, who began his mission with the teaching of catechism classes in a “ramshackle building” downtown. Passing on the task of establishing a school in the new parish to his assistant, founding pastor Monsignor Dominic Blasco, the two-story, Italian-inspired building was constructed and ready for students a year after the parish’s accompanying church.

“The size of the parish was reflected in the overwhelming enrollment that first year,” explains Mary Lee Eggart, a longtime parishioner and historian for both the school and the church. “The diversity of this part of town has long played into the character of the school. That’s something that continues today.”

That diversity is something principal Cecilia Methvin has observed for years. While this is her first year in the top leadership position, she has spent nearly 20 years at the school, operating in every capacity from teacher to assistant principal to parent.

“When I watch the kids outside, all of their interactions are so natural and organic,” Methvin says, noting that the school’s small size aids in the children’s overall attitudes toward one another. “The kids here are diverse geographically, socioeconomically and religiously. But on the playground and in the classroom, no one knows each other’s stories and none of that seems to matter.”

Since the school began looking beyond the immediate parish for students, Sacred Heart has expanded to include families from places like Grosse Tete and Plaquemine, in addition to other Baton Rouge parishes. And while the distances from which people travel each morning set the school apart from others in the area, Methvin says it’s not a negative, but a positive. “People are looking for something when they come here,” she explains. “Everyone here has chosen Sacred Heart for a reason. It didn’t choose you, you chose it.”

Christina DiVincenti O’Brien, class of 1995, chose Sacred Heart for her children, making them fourth-generation students and fifth-generation parishioners. The choice wasn’t a given, though.

“My husband didn’t go to Sacred Heart, so it was only fair that we toured other schools,” she says. “But once we walked into the school, my husband immediately said, ‘This is the only place for our kids to be.’ It brings tears to my eyes that he so clearly saw the heart here.” 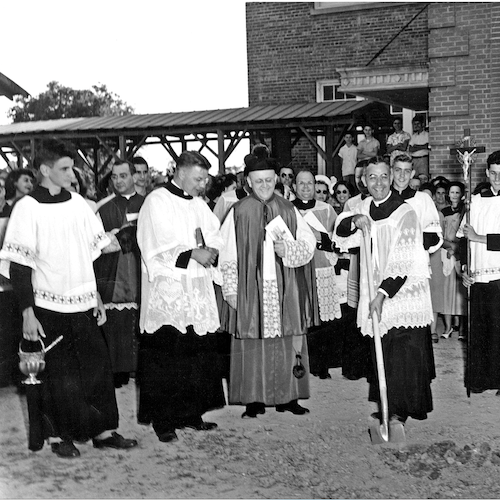 High enrollment quickly rendered Sacred Heart’s original building obsolete. In 1949 (above), ground was broken for expansions that would bring the school building to how it is known today. Photo courtesy Sacred Heart. 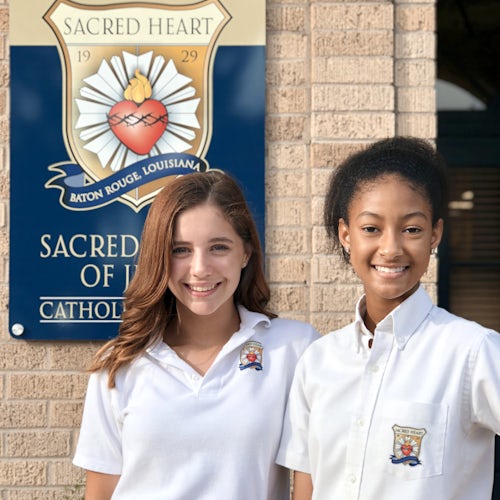 That heart comes from the teachers and families who not only devote their time to enriching children’s lives, but genuinely enjoy the day-to-day process. Teacher Michelle Heine is out of retirement after just two years and back to her beloved classroom because she just couldn’t stay away.

“I have discovered that I’m a better person when I’m here,” she says. “I missed sharing my faith with the kids. When I face them daily, I’m more honest about my faults and I strive to be a better person. Now that I’m in my 40th year here, I still haven’t once said, ‘I’m going to work.’”

As the 2019-20 school year kicks off, the Sacred Heart community will spend the entire year in celebration of the milestone anniversary, with a special mass on November 3, in addition to the creation of an online network for alumni to reconnect and reminisce in much the same way as DeJohn and the class of 1962.

However, the theme of the new school year isn’t just about looking back fondly on the past. Methvin says the coming year presents an opportunity to use the rich foundation that has been established in the last decades, and build upon it to create something that speaks to a new generation of faith and learning.

“Our theme for this year is, ‘Be who God meant you to be and you’ll set the world on fire,” she explains of the quote from St. Catherine of Siena. “We want to produce children who know who they are. Technology is great, but there is something to be said for traditional values. We focus on the character that goes beyond the academics, and that matters.”