Pixie Lily founder Léda Jackson resides in South Carolina but says she can’t help but come back to Louisiana for things like photo shoots. For the brand’s latest collection, The Ponchatrain Hotel in New Orleans formed the ideal backdrop. Photo by LeeKay Photography

When Pixie Lily founder and owner Léda Jackson fastened the buttons on her new daughter Suzanne’s vintage layette, she could feel the history that the tiny white outfit possessed. The gown had been handmade for Suzanne’s great-grandfather, Count Hughes Jules de la Vergne, and its intricate details not only spoke to the quality of garments from days past, but the ancestral love that lives on through the delicate fabrics passed down from generation to generation.

“It was so simple, so beautiful,” Jackson recalls. “I thought, ‘How hard could it be to make this?’”

As it turns out, harder than Jackson imagined. The intricate details proved a challenge for her limited sewing experience. However, in working to fashion a wardrobe filled with classic and chic pieces for her daughter, and later, her son, she felt a growing closeness with the women and mothers who had come before her, the ancestors who spent days creating gowns, blankets and more so they could be passed down for generations.

Inspired and getting the hang of her new craft, Jackson realized that she could create these heirloom pieces for more than just her own family. In launching her line of subtle-but-sophisticated children’s clothes, Pixie Lily, in 2000, she was becoming part of new family traditions that reached far beyond her own personal roots.

But she isn’t the only one. Louisiana has strong representation in this space, with a handful of brands founded by moms just like Jackson who are dedicated to keeping alive the traditions of classic children’s clothing. And while the brands are many, these female-founded businesses are dedicated to bringing the same love and care to one another that they do their smocked and embroidered dresses and jon jons.

“All the Louisiana brands are connected,” says Little Louanne co-owner Kaleigh Pedersen. “It really is a community where we can ask each other for advice and support. It’s great to be around such encouraging people.”

Read on to learn more about the Louisiana-connected brands that are providing a much-needed dose of Southern style to the children’s clothing market. Click the brand names to shop online or find local retailers. 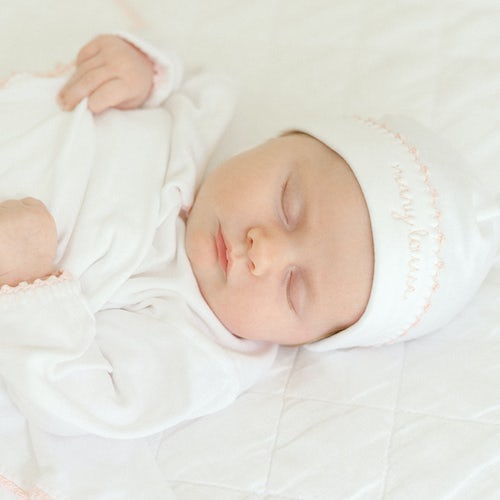 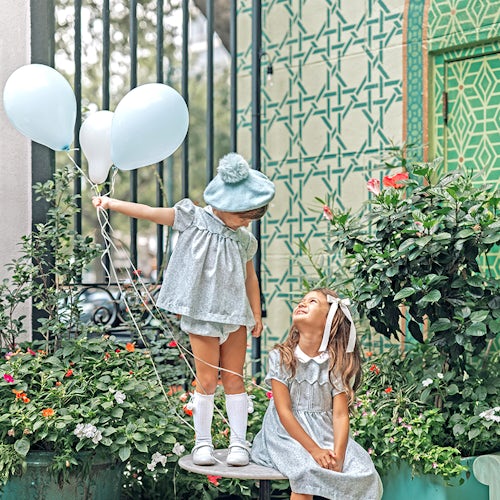 New York. San Francisco. Los Angeles. Baton Rouge? Léda Jackson says the Red Stick is among the cities that account for Pixie Lily’s most annual sales. Why? Our city’s dedication to heirloom pieces for babies and children is part of it. But she credits her success here to Oh Baby! owner Mary Lou James. “She was one of the first stores to carry Pixie Lily,” Jackson notes.

Despite calling Charleston, South Carolina, home, Jackson is a Louisiana girl at heart. Her mother went to LSU and her father to Tulane. Her brand has become a reflection of this heritage, catering to her Louisiana fans (see Pixie Lily’s release of outfits fit for Louisiana-centric holidays) while still employing what she has learned as a South Carolina native. “It’s the Charleston grandmother who takes off one piece of jewelry before going out,” she explains. “You want the first thing you see to be your baby, hence the simplicity of Pixie Lily garments. If you wouldn’t wear it to a cocktail party, don’t put it on your baby.”

Crochet-edged day gowns (it’s a right of passage to learn to button these beauties), diaper sets and pajamas are favorites among new moms, but the collection is growing to fit the needs of Jackson’s loyal clientele, many of whom stretch far beyond the South.

A princess in Kuwait was actually one of the first-ever Pixie Lily customers, buying up a dozen of everything Jackson had in her initial collection. “That was a busy month,” recalls Jackson with a laugh, noting that she was a shop of one at the time. Now, celebrities like Stephen Colbert are regular “pixies” (the name given to devoted customers).  Colbert gifts Jackson’s delicate layette to family and celebrity guests alike.

“We put together the packages for him, specially selecting pieces for whoever he is gifting to,” explains Jackson. “That’s a pretty fun part of the job.”

But no matter if the customer is in Baton Rouge or Los Angeles, the goal, for Jackson, is always the same: to help families create lasting memories while starting new traditions.

“It’s the greatest achievement for me that I have made something that is moving on to a second generation,” explains Jackson, noting all of the pictures that the brand’s Instagram account is sent daily, each commemorating sweet milestones for families. “In a throwaway society, it’s so nice to have something to pack away and pass on.”

Purple and gold stitching forming a gameday parade embellishes co-founder Kaleigh Pedersen’s favorite Little Louanne creation to date. “That collection really took off,” she explains of the line that has grown to include versions for many other Southern schools. “But for me, it represents happiness.”

Pedersen and her sorority sister Jeni Spragis joined forces to establish the Zachary-based brand in 2017. Spragis had a background in fashion merchandising; Pedersen’s was in sales. The pair wanted to create something that spoke to the place they were at in their own lives with their own children. “It felt like a recipe for success,” Pedersen notes.

Four years later, the brand has come to represent more than just embroidery and patterns. The designs are a reflection of the evolution of the lives of the two friends. As their children have grown, the collection has expanded to include pieces for their new sizes and interests. More recently, their daughters have taken part in the design process, dreaming up dresses for a Valentine’s Day line. And for Pedersen, Little Louanne has even become an outlet for her mourning process.

“My sister passed away in 2019,” Pedersen says of sports reporter Carley McCord. “To honor her, we started a line in her name. Money raised from the line goes to help children with heart conditions. If I don’t do anything else, that gives me purpose.”

The line prominently features rainbows, a nod to McCord’s last Instagram post, which bore the caption, “Only rainbows after rain.” The popularity of the release felt like validation to Pedersen–not just of Little Louanne’s designs, but of the community the brand has created.

“When we first launched, all of our sorority sisters bought the line and that was so exciting,” Pedersen recalls. “But the first time I was tailgating and saw three or four kids walking around with our pieces on, that was something else. It makes me happy to know that our clothes are out there making people happy.” 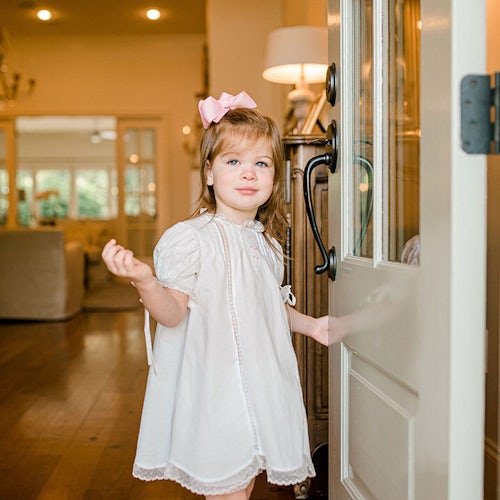 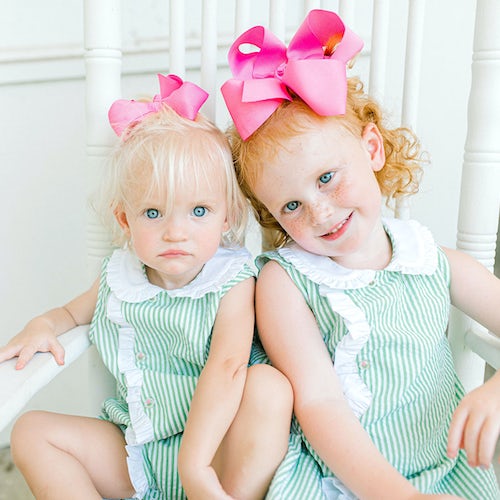 Founder and owner Kim Ho never set out to start a clothing brand. It was on a trip back to her hometown, a remote village in Vietnam, that the opportunity presented itself. “I asked my cousin, ‘Can you smock?’” Ho recalls. “My son was just three at the time and he was wearing a jon jon. They took it apart and figured out how to smock right then. Three days later, we had 50 women learning how to smock.”

Ho’s son is now 24 years old and the operation has grown into a thriving children’s brand based in Bogalusa and sold across the country. The success of Remember Nguyen’s delicate embroidery and classic, vintage style for everything from bubbles to dresses has allowed Ho to establish new connections and help build a better life for the people of the village her family left behind when she was five.

“When we first visited, there wasn’t even running water,” she recalls. “All I could think was, ‘What can I do to help?’ Now, our little village is thriving.”

Remember Nguyen employs the women of the town, giving them the opportunity to support their family without having to leave their children for months at a time like they would have to if they worked in a major city. In addition to work, Ho also offers English courses and works to build things like playgrounds and churches in the town. She hopes to establish scholarships and other educational programs for her workers in the years ahead.

“Everything you buy from us goes to support the village,” Ho says, noting that direct donations can be made online. “It’s so humbling to me that I get to do this.”

Standing in contrast to the smocking of many of the other brands, Harbour isn’t about embellishment. Rather, Baton Rouge mom and owner Kate Freeman’s take on children’s pieces revolves around comfort and simplicity.

Around two years ago, she took over the business from Harbour’s original owner, Lissa Gunn. Having discovered the organic cotton and soft linen pieces at a trunk show at Edit by LBP, Freeman, a primary care physician, says she couldn’t imagine her kids’ lives without Harbour.

“Honestly, the clothing is in line with the same philosophy I have as a doctor,” she explains. “It’s about comfortable living.”

The commitment to comfort came easy. What wasn’t as simple was juggling life with five kids ranging from 15 to 5 and navigating a world that was completely foreign to her.

“I was trying to deal with sewing factories and all these different outlets and I just didn’t speak the language,” Freeman says. “It wasn’t until I pulled up to my first pop-up that it hit me that I had never worked in retail.”

But for all the challenging moments, Freeman says she came out stronger on the other side. “It’s amazing what experience can teach you,” she says with a laugh.

Now, what she once thought would be a side gig is a booming business. The effortless, Nantucket-meets-the-South style that is the trademark of Harbour has garnered fans across the country, exposing Freeman to new experiences and a whole new worldview.

“I have a new appreciation for the risk and sacrifice that small business owners make,” she explains. “It truly is the community that keeps us going. I have moments where I wonder how I am going to keep doing this, but then I get sweet messages from customers or see someone wearing our clothes. That makes it all worth it.” 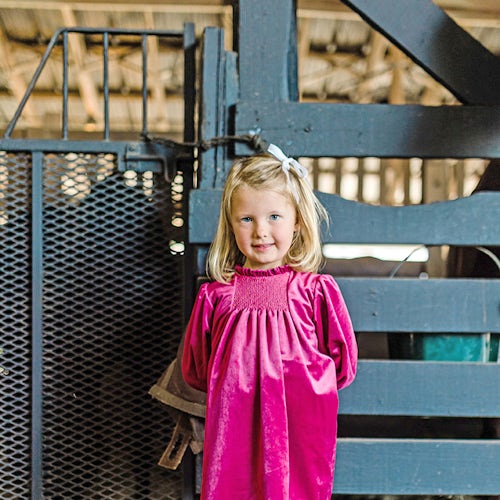 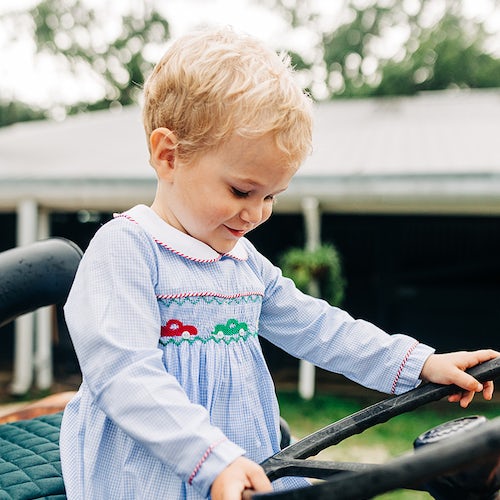 Six years ago, Baton Rouge sisters Mollie Hill and Glynes Hyde were presented with the opportunity to expand upon their space in the children’s clothing world. Already operating their brand Red Beans, which offers fully customizable garments, for six years, they jumped at the opportunity to add to their offerings and cater to new clientele. “We loved the idea of being able to dress a child from A to Z,” says Hill.

Specially sourced European fabrics are the hallmarks of Alice Kathleen & Company’s biannual collections, which are designed in Florida and sold throughout the South via home shows, in addition to online. “The home shows are the Alice Kathleen tradition,” Hill explains, noting that in the past six years, the shows have grown from 30 per collection to over 300.

This tradition of bringing the clothes straight into the homes of loyal buyers for them to see, touch and share with friends has allowed Alice Kathleen & Company to expand it’s customer base in a unique way. Rather than sitting stagnant on a store shelf, the high-end fabrics and classic silhouettes are at the center of a community of women who come together to shop and share stories, advice and memories.

“There is a great camaraderie,” Hill says, noting that each home show offers a different experience. “The women who buy our clothes for their kids are people for whom dressing really means something. They put their kids in the dresses for school—it’s not reserved for special occasions. That’s how it was when we were kids.”