Vintage Pursuits: A new house gets old-world charm thanks to reclaimed materials that stand the test of time

A double island in the kitchen makes entertaining family and friends a breeze with ample storage and more space for food displays. “Sea Pearl” quartzite tops the counters and hand-molded glazed clay tile is used on the backsplash. A 48-inch Wolfe stove is as useful for large parties as it is for intimate dinners. Interior photography by Sara Essex Bradley. Exterior photography by Melissa Oivanki.

The legacy of Louisiana-based architect A. Hays Town is significant in the world of construction, and it continues to inform the design of new homes throughout the Southern region. Certainly, large gallery porches, high ceilings, interior courtyards and French doors with full-length operable shutters come to mind when envisioning one of Town’s iconic homes in the area. But it was his use of reclaimed materials and wood-molded brick that stuck with Wade Thibodeaux, as he and his wife Cara were planning their new construction in the University Club.

“My father, Tommy Thibodeaux, worked on the majority of A. Hays Town houses years ago as a mason. And the bricks used had to be oversized and cut from a wood mold,” says Wade. “I started working with my dad at age 12 and learned the importance of using good materials, and I wanted the same for my house.”

The Thibodeauxes turned to Mark Matthews for the architectural design of their home—one that would incorporate a family-friendly layout for their four children along with plenty of space for entertaining—while Oufnac Construction headed up the building process with Wade overseeing much of the work personally. Interior designer Amanda Cason was brought in early to help spearhead the project and to create a strategic plan for the interiors. It had to include salvaged materials to suit Wade’s wants plus a clean, crisp palette for Cara.

“Wade is very detail oriented,” says Cason—an attribute she appreciates because Cason focuses on details as well. “He managed the project, and every piece of reclaimed wood used was chosen by him.”

Wade was passionate about incorporating substantial, high-end materials that would serve as the foundation of the home. The old beams for the ceilings were originally procured from a straw-hat factory in Massachusetts. Travertine was trucked in from docks in Texas to floor the interiors as well as the exterior pool deck using two different, but complementary, methods of finishes. And the masonry was, of course, wood-molded brick.

“We discussed it a lot, but we ended up painting the brick arches in the interiors,” says Wade. “But the wood-molded brick still adds a lot of texture that regular brick doesn’t have. It just looks weathered.”

Although the reclaimed-wood beams and the textured brick is reminiscent of days long gone, the filled-and-honed travertine in “Ivory Blend,” laid in a French pattern, brings a crisp, modern aesthetic to the main interiors. It is this easy-to-care-for natural stone that sets the tone for the rest of the home: one of bright, light interiors and indoor-outdoor living.

“The design of this house was all about capturing daylight,” says Cason, noting the floor-to-ceiling windows and the open flow of the public rooms. “We didn’t supersaturate the color, but we added it to create interest.”

Deep blue hues kept creeping into Cason and Cara’s concept imagery, so it was a natural choice to lean to when adding color to the living room. In Cara’s ladies’ lounge—a library-like room just for her—dark mauve covers the chairs and backs the shelves. And “Deep Creek” by Benjamin Moore coats the bookshelves in Wade’s study beyond his trophy room, matching adjacent wallpaper to a T. But it is the layout of the rooms themselves that really speak to the livability of the family’s home.

“We’ve hosted a number of parties here since we’ve moved in, and the flow from room to room has really worked. We couldn’t have laid it out better,” says Cara. “For a baby shower party for my best friend, we had a caterer set up food in the dining room. Then in the kitchen, we had the appetizers on one island and the desserts on the other. The bar was set up outside. So people easily moved between the inside and outside and used all of the spaces.”

One space that commands center attention is the iron-and-glass-clad wine room adjacent to the dining area. Wade and Cara were actually married in Napa Valley, California, and they enjoy sampling and collecting wine. But this wine room is more than a typical storage space. Wade envisioned a restaurant-quality room that was as appealing to the eye as it was practical to the bottles stored. This room has its own high-tech refrigeration system and the glass had to be insulated.

“I couldn’t find wine racks that I would want to install in the room,” says Wade. “So I mocked up a design of what I wanted and took it to my friend, who is a fabricator. We created the racks to look like what you might find while dining out.”

And who would want to dine out when the dining room and kitchen areas are more appealing than anything one would find elsewhere? While entertaining was essential in the design, so was family. With four children, ages 2 to 15, the days are busy and the Thibodeaux home get its fair share of activity. But it’s also a wonderful place to relax and restore for the next day.

“The home is really very Southern in its vernacular,” says Cason. “It has classic elements as well as locally sourced reclaimed wood. It is built for entertaining.
But at the end of the day, it is really perfect for family. There is nothing more Southern than that.” 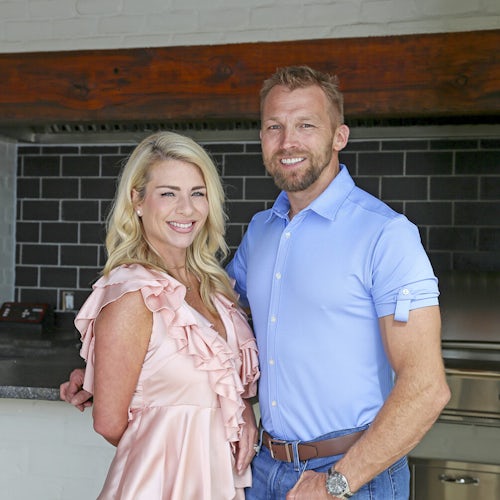 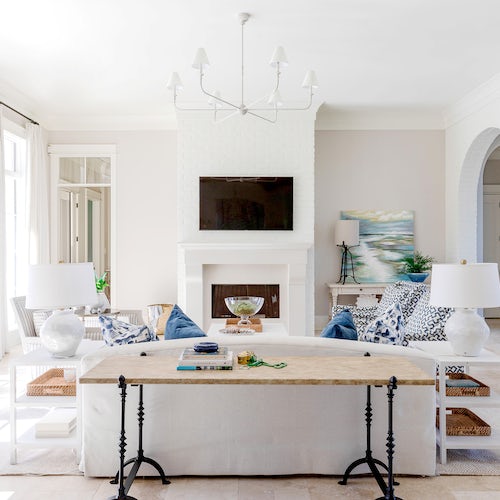 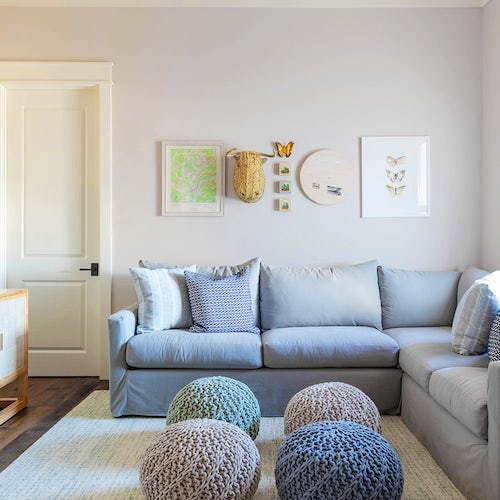 Reclaimed pine floors upstairs in the kids’ living room is the same as the wood floors in the downstairs spaces. Furniture here is kid (and fun) friendly. 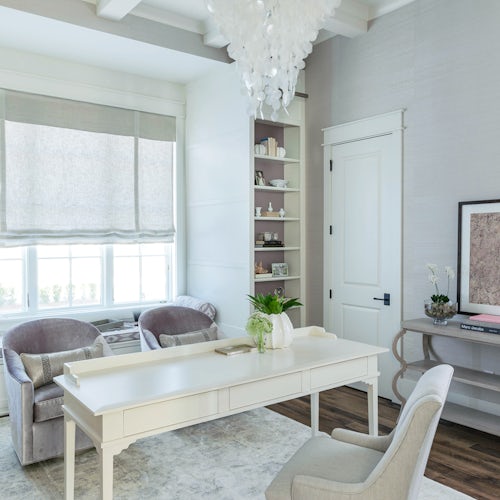 “Cara has great fashion sense, so we wanted to create a room for her that shows that,” says designer Amanda Cason of the ladies’ lounge. “The silver texture on the grasscloth reflects the dark mauve velvet on the chairs and bookshelves.” A capiz shell chandelier hangs overhead. 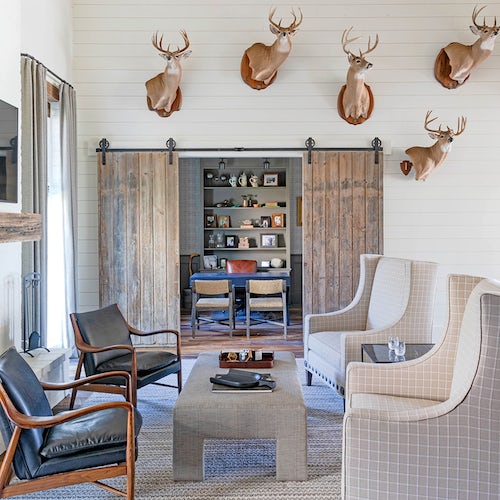 The trophy room is Wade’s vision come to life. Ceilings rise to 22 feet at their peak, and white-tail deer line the nickel-gap shiplap on the walls. A recent installment (not pictured) is a moose Wade shot in southwestern Alaska. The barn doors—chosen from Old Wood Reclaimed in Iota—lead the way to his study beyond. 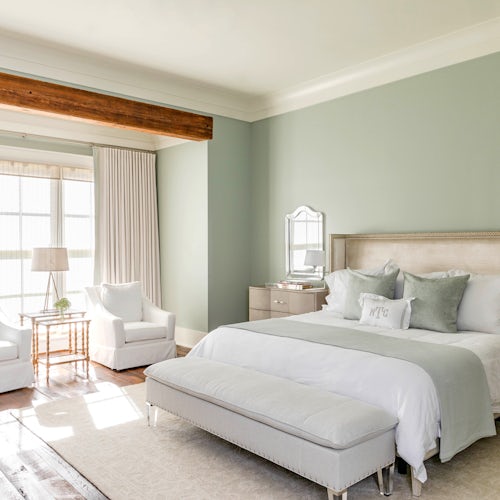 Cason created a timeless retreat for Cara and Wade in the master bedroom that would mimic, but not replicate, the rest of the house. Fittingly, the wall color is called “Tranquility” by Benjamin Moore. 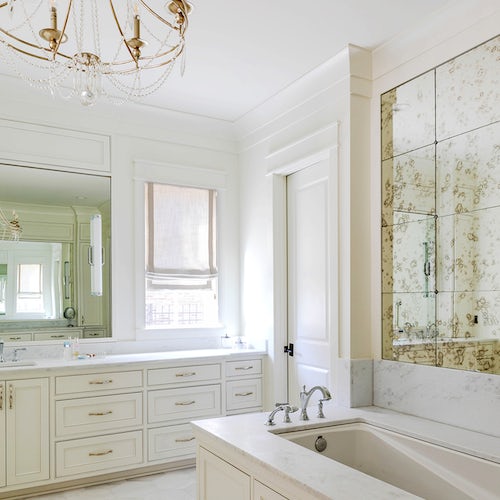 A honed Swiss white marble in the master bath covers the counters while custom-size antique mirror tiles set with decorative finials reflect light atop the tub. 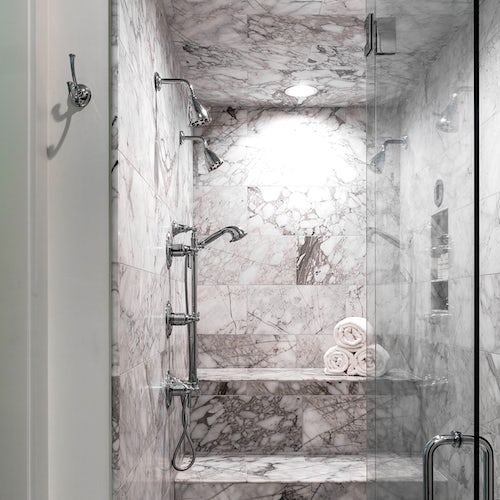 The sauna-like steam shower in the master bathroom includes a bench and is clad in Venetian Calacatta marble. 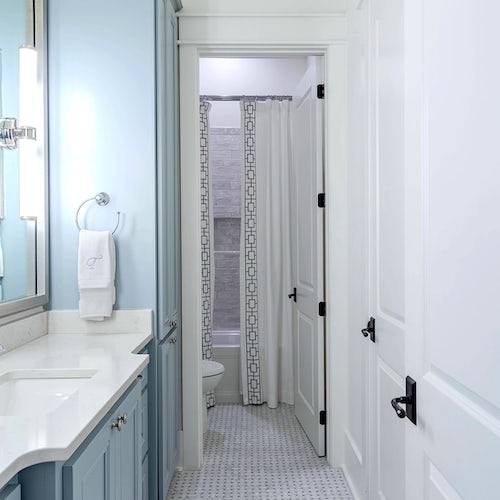 “Boothbay Gray” by Benjamin Moore on the guest bath cabinets is also used in all the children’s bathrooms upstairs. A contrasting basketweave marble mosaic lines the floors. 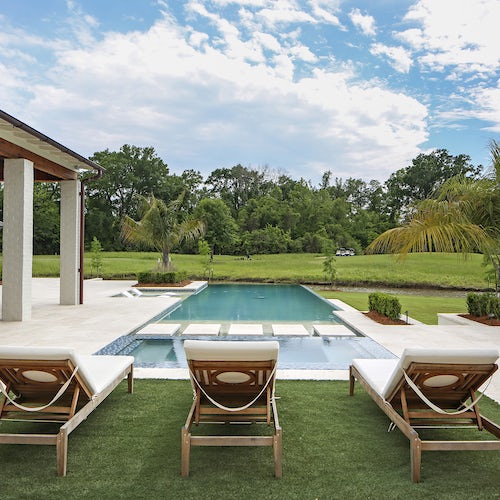 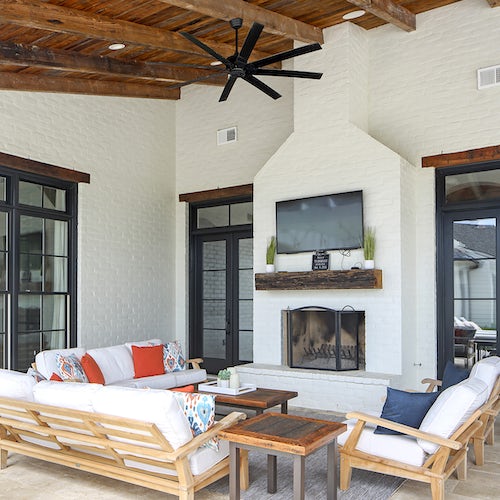 The outdoor living area, coupled with dining, is comparable in size to the Thibodeaux family’s indoor living space, which doubles their entertaining options. They spend an ample amount of time outdoors, even without guests to entertain. 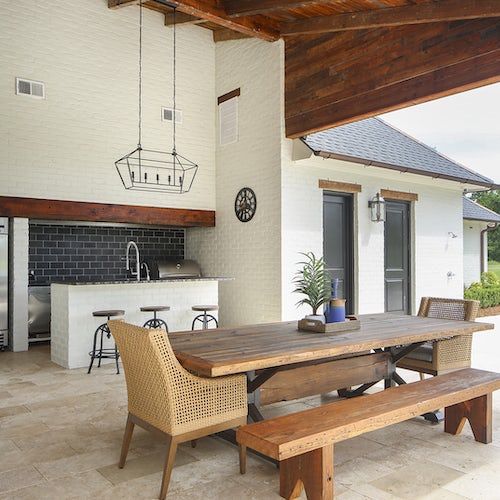