“I’ve always been a big music enthusiast,” says Dom Peré, “so I wanted the living room to be an area of music, art and conversation.” Dom plays the guitar and his son plays the piano. The living room has proven to be a perfect spot for large parties or intimate gatherings. Photography by Chad Chenier.

This article originally appeared in the June 2020 issue of inRegister.

Nestled along a zippy strip of Jefferson Highway, tucked behind high hedges and a wrought-iron fence, sits a classically appointed house with great proportions, a broad green lawn and manicured foliage. Eye pleasing yet understated. Sophisticated yet unpretentious. One might assume that the owners of the house were traditional without compromise. Stuck in their ways. Staid. Perhaps a tad cautious.

One would assume wrong.

“The exterior of our home feels very old world,” says Dom Peré, who purchased the house with his wife Ashley in 2014. “But the inside feels nothing like that. We wanted spaces that could embrace our energetic and sometimes chaotic life, with friends and family, animals and entertaining. We loved this home’s location, and we saw its potential. We knew we could work with it.”

And Dom and Ashley are used to making things work. Early in their marriage, the duo moved to Dubai, United Arab Emirates, after graduating from LSU. From Dubai, they traveled extensively throughout Europe, Asia and Africa and were influenced by various cultures and food and landscapes. After starting a family, they returned to south Louisiana knowing that Dom’s global transportation and logistics company—Marex Services Group—could be stationed anywhere. The Perés looked for a forever home that would incorporate their “open door policy” of parties for business clients and friends. They found this home in the center of town with the right mix of style, scale and space, so they turned to interior designer Ty Larkins for inspiration.

“Dom and Ashley really know what they like. They wanted something classic and timeless, and they wanted to put their design stamp on the house,” says Larkins, who notes that the Jefferson Highway home is believed to be the city’s former Italian Country Club from the 1930s. “They are very well traveled, and they wanted to incorporate a lot of their own ideas into the home. We were on the same page, designwise, from the beginning.”

Larkins began by giving the home an urban color palette, with black painted windows, white walls and darkly stained floors. He notes that this gives furnishings a chance to take center stage. In the front living room, Larkins created a space designed for entertaining, with separate seating areas conducive to large gatherings or small groups. Two Tony Mose paintings—one topping the sofa and the other above the mantel—introduce color into the room and are a launching pad for the blue accent hue used here and throughout the house. The blue is a dominant color in the adjacent dining room.

“We discovered that the dining room was a perfect square, which is very unusual in architecture,” says Larkins. “I knew we had to have a round dining table. But then I really wanted to reinforce the dimensions of the room in other ways as well.”

In the dining room, Larkins had the floors painted by Sally Conklin to emphasize the geometry of the space. To infuse 1940s glamour into the scene, he reimagined curtains with tiebacks but used modern bold hues to update the look. It was a risky move—an updated take on an old-school execution, but it worked. A modern light fixture with steel cables counters the classic chairs surrounding the table.

The blue hue extends into the family room, where the Perés spend the most time with their children Landry, 11; Caswell, 9; and their four-month-old twins Genevieve and Reeves. This room opens to a refreshed kitchen with new paint, brass hardware and hardworking quartzite countertops. But it is the treasure of the private quarters of the house, especially the master bathroom, that evokes an otherworldliness worth staying home for.

“When it came to the master bathroom, I was inspired by the idea of an old-school Ritz Carlton reimagined in a modern way,” says Larkins, who created a 3-D rendering of the space to explain his vision to the Perés. “The room was large, but the previous layout didn’t take advantage of the space. So we started over.”

The centerpiece of the new master bathroom is a mirror that seems to float in the center of the room, separating the two vanities. Custom millwork and oversized Statuary marble along the floors and walls, along with black marble with subtle veining, gives this often-overlooked space a wow factor.

“For design inspiration, I usually look backward. I look to the past and make it fresh again,” says Larkins, who pores over design books from different decades for ideas. “I take what has been done successfully, and I put a new twist on it. I make it feel new.”

So although the exterior of the Perés’ home is decidedly well-established and charming, the interiors are as fresh and new as this young family. They filled the house with pieces they love from travels abroad, and they’ve created a space that can accommodate a crowd but is just as pleasing for their private family moments.

“We wanted each room in our house to have meaning,” says Dom. “The smaller and the more boutique the better. We love boutique hotels and we want every inch of our space to feel unique. Now we have a space that is all our own.” 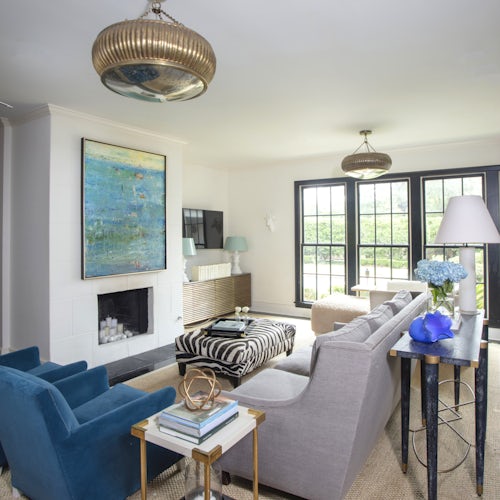 A painting by Ralph Turturro (cousin of actor John Turturro) hangs above the fireplace in the family room, giving the room a jolt of color that is reflected in the chairs. 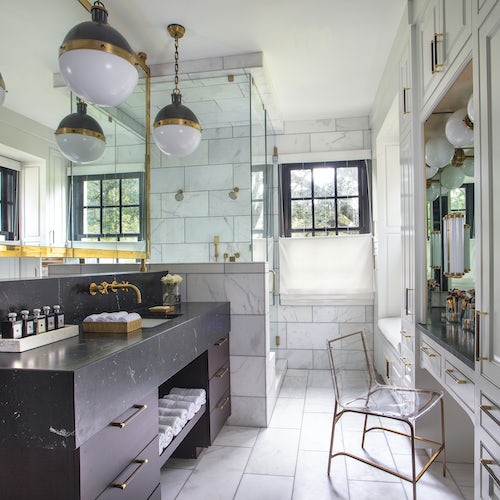 The master bathroom was completely gutted to make way for this sophisticated space reminiscent of a grand hotel. An oversized mirror in the center of the room separates the his-and-hers vanities in an unconventional way. 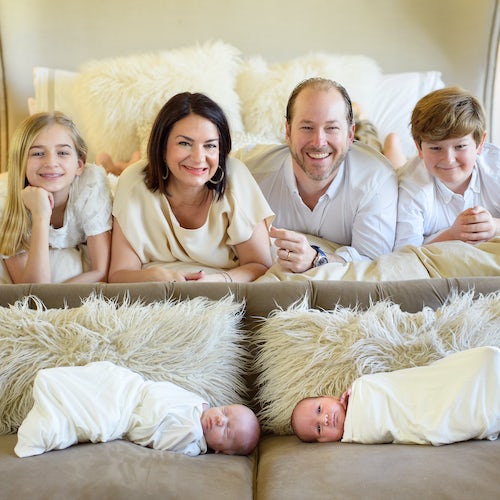 Ashley and Dom Peré, with their older children Landry and Caswell, welcomed twins Genevieve and Reeves to the family this year. Their updated house was created with family, friends and animals in mind. 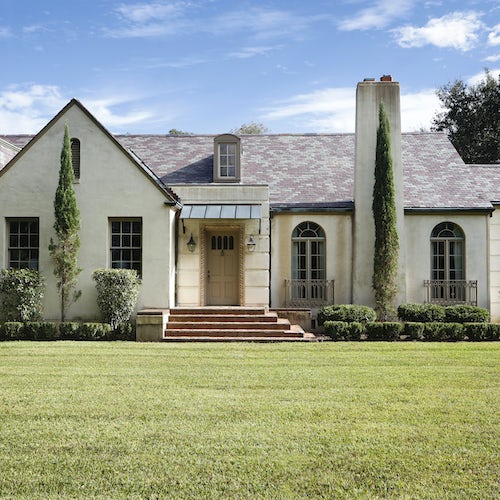 The Perés’ home on Jefferson Highway, not far from Government Street, is believed to be the Italian Country Club of the 1930s. 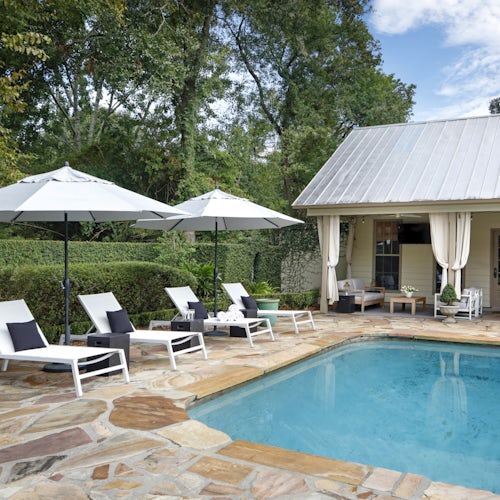 “We entertain a lot, and we love to entertain outside,” says Ashley. “We both love to cook, and we have an open-door policy with friends." 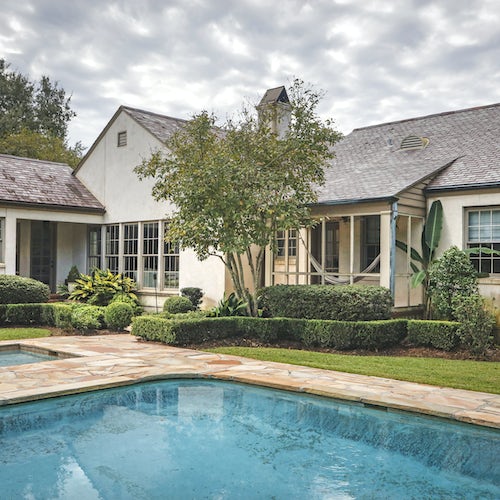 "We can be grilling outside and feel completely isolated from the outside world because of the privacy of the backyard, even though we are in the center of town.”