This article originally appeared in the October 2019 issue of inRegister.

Two years. Two cities. Two babies. Two houses. A lot of life can happen in a matter of 24 months. But a short time frame and miles of highway are no great feats to overcome for Beverly and Justin Haydel.

Just a handful of years ago, Beverly was traveling back and forth between Baton Rouge—where she was a director at the Baton Rouge Area Foundation—and California, where Justin was finishing his fellowship in spine surgery at Stanford University. So when they settled in Old Metairie, the Haydels renovated a house, had a baby and planned to stay for a while. Then Justin accepted the position to be head of neurosurgery at Ochsner in Baton Rouge.

“It was a crazy timeline,” recalls Beverly, who also launched her own company, Sequitur Consulting, during those years. “We found the house in Bocage, but we needed it renovated quickly.” Beverly knew that she wanted to live near her parents, James and Lynn Moore, who own a home in Bocage Lakes. And she was drawn to the convenience of the neighborhood and the young families who were buying houses in the vicinity. But she had a full-time job, as well as a toddler in tow and a new baby on the way. She counted on interior designer Colleen Waguespack, who had recently finished the Haydels’ Old Metairie home, to refurbish the Baton Rouge abode and bring many of the same elements to it that Beverly loved in the last house.

“We had about two months,” said Colleen of the Bocage home renovation. “It was a quick turnaround, and we touched every single surface of the house. We used the same paint colors, the same choice for the stair runner, and even some of the same drapes as in the former home. But we stripped the floors and replaced every lighting fixture and all the hardware, which makes a big difference. We made it more consistent and current.”

Although the style of the Bocage home is very different than the Haydels’ former house, the family that lives in it remains the same—professional, youthful and growing. Colleen was challenged with creating a spirited house that would be as appropriate for hosting adult parties as it would for inviting young friends over for a play date. With this in mind, she added punches of color through art and accessories. She put no-fuss fabrics on furniture with sculptural lines and she kept the aesthetic clean and comfortable. But it was Beverly’s decision to put a glass gate around the courtyard pool, ensuring that views didn’t have to be compromised just because children scampered through the halls.

“I never would have built a pool with young kids, so I knew we had to have a fence,” says Beverly. “I had seen a glass fence at resort properties, and I thought that would be a great solution. It’s actually been really amazing. It doesn’t get that dirty.”

Beverly and Justin like a bright and airy home, so Colleen lightened up the kitchen and family room by painting the brick walls, whitewashing the wood beams and ceiling, and painting the wood cabinets Benjamin Moore “Classic Gray.” This visually expanded the space. The hood above the stove was replaced and a larger island installed and painted “French Beret” by Benjamin Moore. Kalahari quartzite on the countertops is close to indestructible. Here, the young family spends most of their time.

“But Beverly still wanted a formal living room in the front of the house,” says Colleen. “One that was fun, young and inviting.” Colleen took her cues from the Doug Kennedy painting the Haydels already owned. She covered the walls with a hand-painted Anna French grasscloth, installed a Lucite and brass light fixture and topped the spill-proof velvet-covered sofa with pillows by designer Rebecca Atwood. “The pillows serve as art. I thought it was a great balance.”

And balance was key throughout this process. Sumptious style was coupled with durable elements throughout the main living areas and even extends to a playroom, a guest bedroom and an upstairs media room and den. “We had to look at what could be done and what couldn’t be done in two months. And we all worked together well.”

Working together well was vital. Colleen would present the Haydels with a few choices of fabrics, furniture and finishes, and the couple would make smart decisions quickly. It’s the only way that the renovations and refurbishments could be completed in the short time frame.

“I really like that Colleen and I share the same taste. We totally aligned,” says Beverly, noting how comfortable the house is. And how she loved that some of her design decisions on her former house transferred well to this new abode . “I prefer to work quickly, and so does she. The timeline was crazy, but she just got it done.”

Take a video tour through this home with designer Colleen Waguespack: 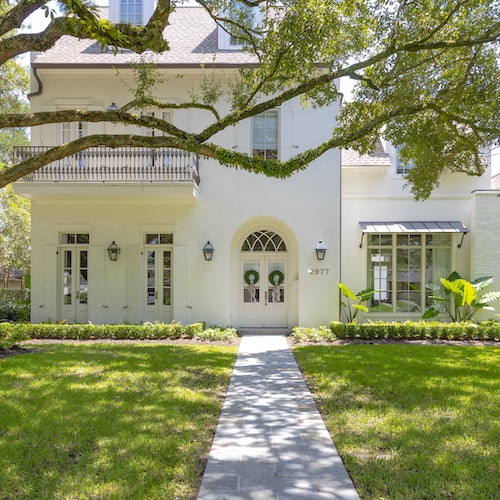 Even the exteriors got a facelift at the Haydel house, including stoops removed from in front of French doors, all new hardware, landscaping and paint. 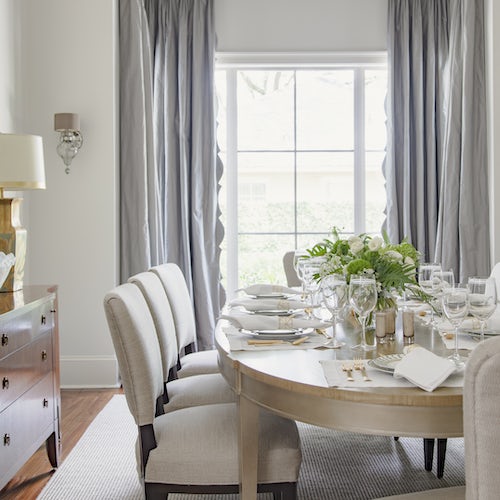 In the dining room, heavy crown molding was removed so that the beams above the windows— bleached and whitewashed—could reign supreme. Elegant, formal draperies with scalloped edges, from the Haydels’ former house, work well with the sconces and chandelier Beverly purchased years ago when she was living in Washington, D.C. Floral arrangements by Red Onion add structure and color to the table. 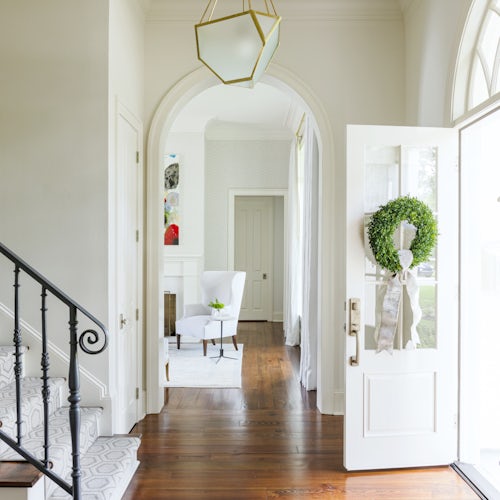 A sculptural light fixture by Urban Electric serves as a piece of art in the entry. Iron handrails were painted gray instead of black to soften the scene, and the same Stark carpet pattern lines the stairs as in the Haydels’ New Orleans home. 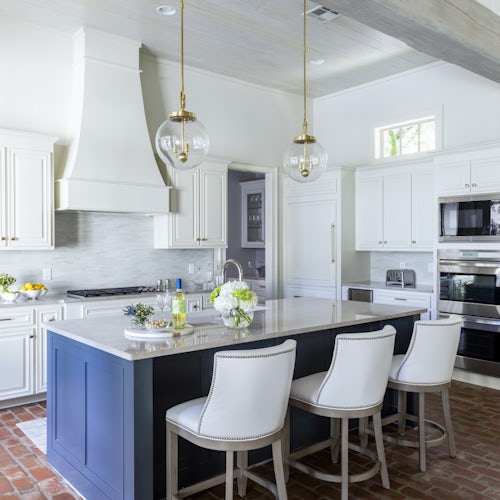 Because interior designer Colleen Waguespack only had two months to refurbish the house, the cabinets remained in place and got a new coat of paint and new hardware. A brand new island, painted “French Beret” by Benjamin Moore, anchors the room, and a new hood creates a focal point on the back wall. Wood beams, ceiling, and brick walls were painted to lighten the scene. 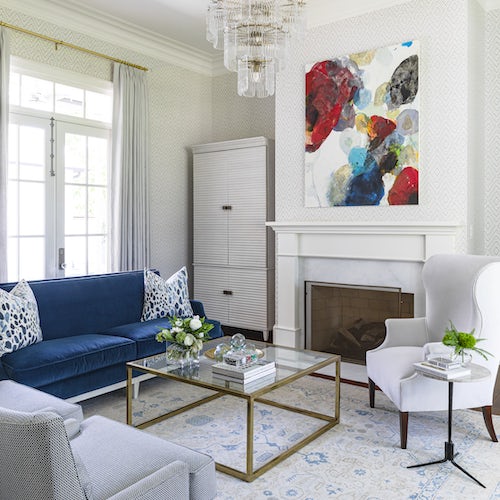 “What I really love about this room is that it set the tone for the entire project,” says Colleen, of the vibrant shots of color and clean lines of furniture reflected in a fun, youthful way. Colleen replaced the wood and added white marble to the mantel as well as included an antique rug to give the living room a more formal edge. 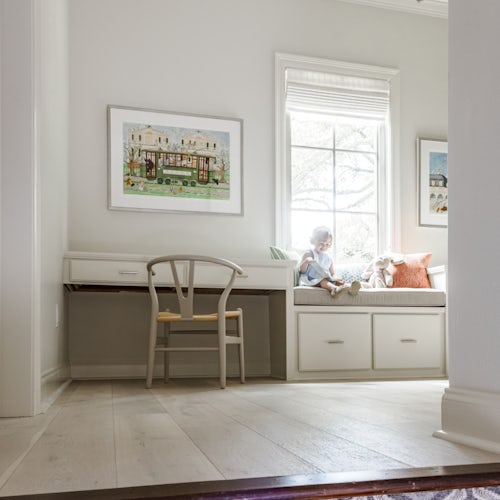 Wall-to-wall carpeting at the top of the stairs was removed in lieu of pre-finished engineered wood for the landing. Colleen added an updated light fixture, hardware, upholstered bench cushions and pillows to complement the Alex Beard artwork. “The goal, always, in a renovation is to make it look like the house was built that way rather than ‘renovated.’ I think the flooring upstairs was a big success with this in mind.” 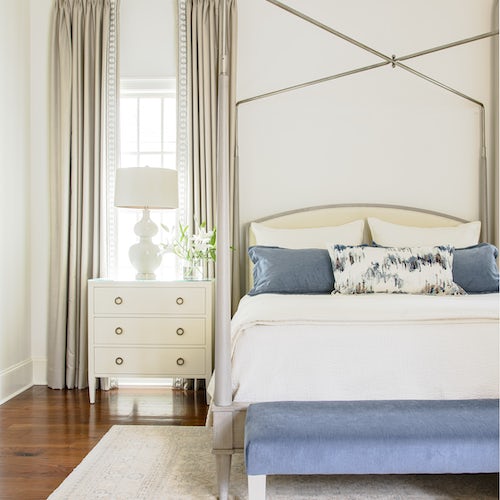 A modern take on a four-poster canopy bed sets the tone for the master bedroom. Here, a subtle antique rug gives instant age and depth to the scene. 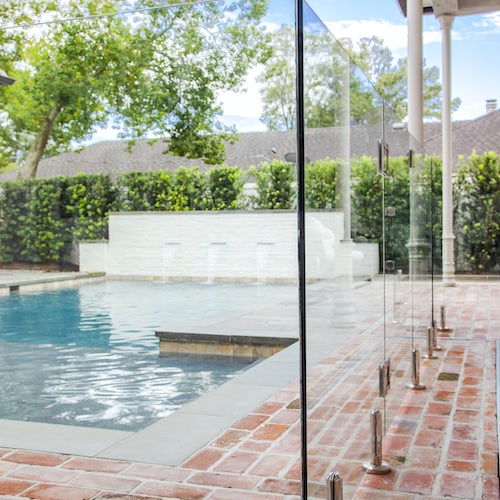 A glass fence Beverly Haydel observed at a resort now surrounds the courtyard pool to keep young children from entering alone. The pool can be seen from three side of the house, so the clear fence doesn’t detract from the view. 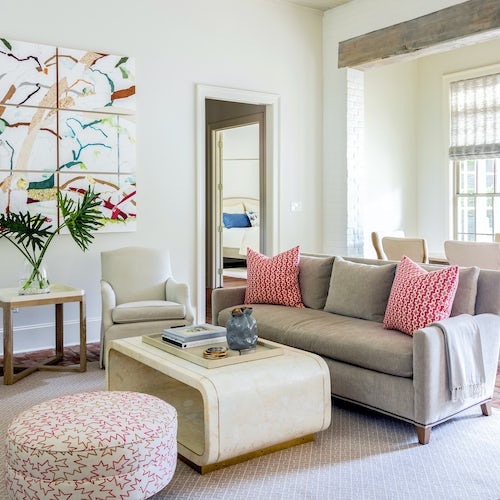 Beverly chose artwork by Jill Lear for the family room off the kitchen. Although the artist is not from Louisiana, this work is a study of oak trees in Lake Charles. Colleen picked up colors from the painting and used them in the throw pillows and ottoman.