The new Kappa Kappa Gamma house was built with a timeless aesthetic in mind. Photos by Chad Chenier

Walkers, bikers, runners, rowers. West Lakeshore Drive curves and meanders, following the footprint of University Lake, while actual footprints of local athletes follow along the road and sidewalks of this popular exercise loop. Especially on weekends, workout groups are deep into training (or deep into discussion) as they pass the grand homes that make up LSU’s Sorority Row. It takes a lot to break their stride. But when the Kappa Kappa Gamma house—a large sorority house built in the early 1960s—was completely razed in the summer of 2019, even the most dedicated of athletes looked up from the sidewalk and took notice. It was a gaping hole in a lineup of beautiful homes. And for those who were dedicated to “walking the lakes,” it was an opportunity to watch the weekly progress of a sorority house being built from scratch.

“It was a very difficult decision to tear the old house down. We considered all angles and options,” says architect Cindy Stewart, a member of the Kappa house board who served as project manager for the rebuild. “It was sad because there were so many memories associated with the previous house, but we had been dealing with fixing problems for so long.”

Dated bathrooms and kitchens as well as confined spaces were contemplated when determining whether to redo or rebuild. But the discovery of asbestos throughout the home helped seal the fate of the more-than-50-year-old house. Pennington & Company, a Greek fundraising group from Kansas, and The Kalos Group, a Greek housing development firm from Alabama, were consulted. A fundraising plan was set into motion. Fusch Architects out of Dallas was chosen for the design of the new house, while local contractor Milton J. Womack Construction completed the build. Susan Trousdale Interiors of Florence, Alabama, took on the task of incorporating the Kappa colors of light blue and dark blue throughout the 30,000-square-foot house in way that makes it feel like a home.

“The timing was difficult because we began fundraising in 2016 then halted it for a while due to the 2016 floods,” says Stewart. “Then we were in the middle of construction when COVID hit, so we had to take precautions there. But in retrospect, we are so thankful the build was complete before the supply chain issues really became a problem. We are lacking a few things because of the supply chain, but not much.”

The day after the last spring finals took place in 2019, demolition of the previous structure began. Construction ensued through the 2019-2020 academic year and through the following summer, while the Kappas conducted recruitment and held chapter meetings at the former Lambda Chi house in the fraternity section of campus. The new Kappa house opened for sorority recruitment in August of 2020.

“We wanted a multi-functional house with timeless appeal,” says Stewart of the must-have list for the new building. “We wanted something that was aesthetically beautiful but also user-friendly and flexible. And it needed to hold a lot of girls.”

Today, the dining room of the Kappa house is the hub of activity, where members can eat breakfast, lunch and dinner. But the space is also flexible, serving as the sorority chapter room as well. Custom-built dining tables can be broken down for storage and walls can be partitioned, creating up to three smaller rooms out of the one. The nearby library is as beautiful as it is functional, with overstuffed furniture clad in performance fabrics. Ample areas for study abound, including singular study carrels on every floor as well as group study spaces and a media workroom for projects. In addition to the house mother’s suite facing the lakes on the ground floor, an additional apartment was also constructed to house traveling consultants as well as family members who might need an overnight place to stay. A leadership study and conference room on the second floor is always filled with people, and lodging for the girls includes one-, two-, three- and four-person bedroom options. Ceiling height on the ground floor is 12 feet while the second floor is 10 feet high, and the third floor is nine. A courtyard is often opened up directly to the dining room during good weather.

“The new Kappa house had to be very livable. Not just for show,” says Barbin Graham, co-chair of the fundraising effort and a very active alumna. “Every time I go there, the girls are living in every room. They are hanging out on the sofas, eating in the dining room, studying or rocking in the rocking chairs on the porch. We’ve created a functional home.”

And appealing to the desires of today’s college students is not an easy task, especially when competing with high-end apartment complexes boasting luxurious accommodations with modern amenities. Sororities and fraternities, especially those in the South, are taking a second glance at their dated homes and considering remodeling or rebuilding. A number have been torn down and completely reconstructed. At LSU, Chi Omega is in the planning stage of redesign and additions. An updated house certainly helps during recruitment, but it also creates a desirable living space for the young women once they join the sorority.

“It really boils down to the bonds of sisterhood. Before, girls avoided going to the house and they really weren’t getting to know each other,” says Stewart. “Now it is very appealing to live in the house. And the more you have living there, the more you have visiting. With more activity, they really feel like they are a part of something.”

And activity is crucial to keeping an organization alive. The activity of the athletes circling West Lakeshore Drive on their weekly runs should only complement the activity taking place within the walls of a sorority house across the street meant to join young women together for a lifetime. For all, it is a beautiful place to be.

“So much has changed since I lived in the house,” says Graham, who was a Kappa in the late 1980s. “But so much hasn’t changed. The house creates a bond for everyone who lives there. You remember the people you lived with and the interactions you had. This new Kappa house is very Southern and very welcoming. It was beyond what I even imagined it to be, and the Kappas in the house now love it as well.”

See more from the rebuilt Kappa house in our gallery below: 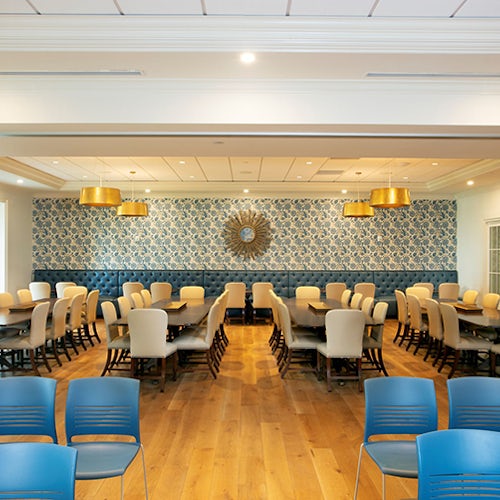 The dining tables were custom built and designed to be able to break down for storage. This room serves as the dining room as well as the chapter room for meetings, and it can be partitioned into three separate areas. 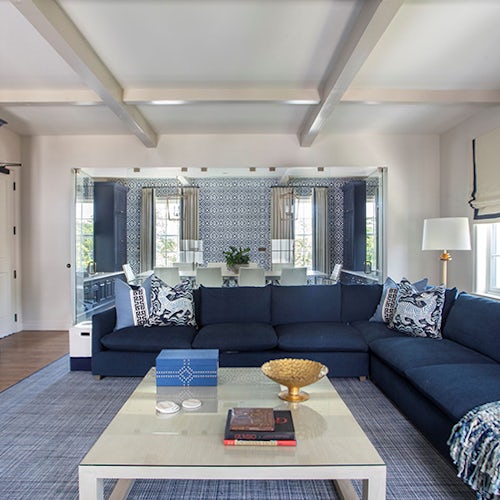 In the leadership study, officers are provided with cabinets for storage of their pertinent materials. The painting on the right is a holdover from the old house and is by local artist Lauren Barksdale. The conference room is to the rear. Lots of windows make for a sunny, airy room. 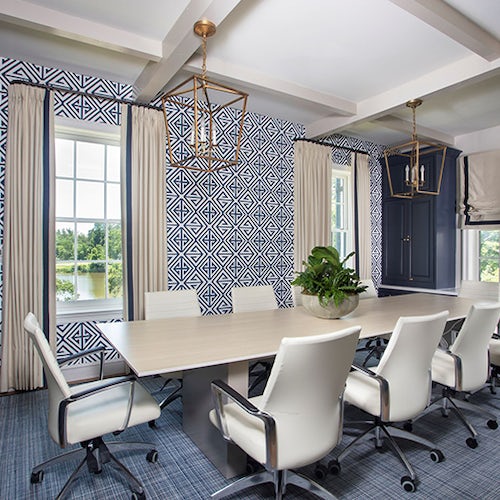 The leadership conference room is in constant use and boasts a wonderful view of University Lake. The table features electrical outlets and charging stations. Wallpaper is by Thibaut Design. All of the area rugs outside of the library are custom indoor/outdoor. 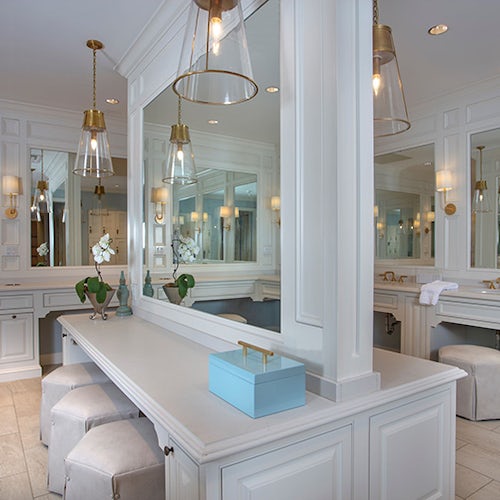 “In the bathrooms, the goal was to create a space for hair and makeup, that was inviting enough to bring the girls and all their gear out of their rooms. They enjoy the camaraderie when preparing for events,” says Cindy Stewart. All the materials are hard wearing and long-lived. Rolling stools were custom from Denicola’s Furniture & Upholstery. All cabinetry is by C&C Millworks. 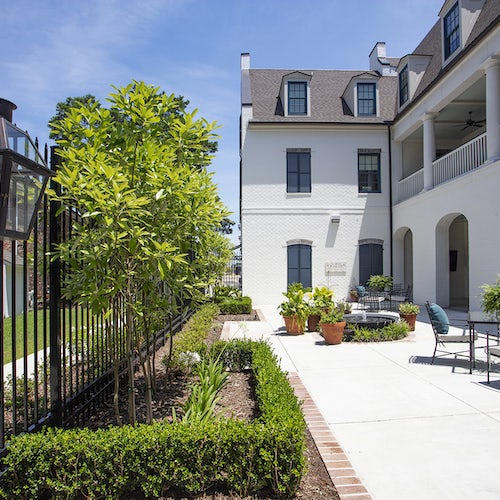 An outdoor space was imperative to incorporate in the overall design of the Kappa house so the members could safely enjoy the outdoors. Rocking chairs—a staple at the former Kappa house—are used on the second floor of the courtyard as well as on the front porches overlooking University Lake. 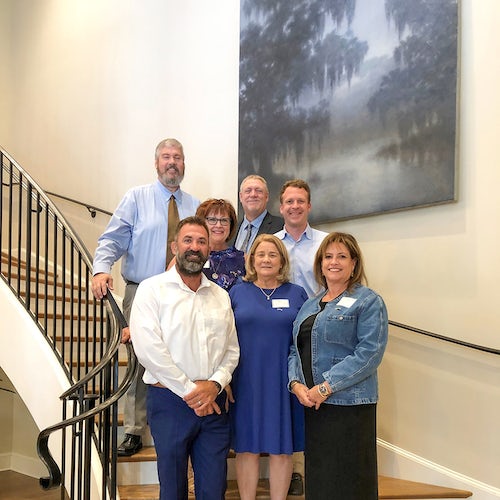