Role of a Lifetime: Behind the scenes of the UpStage Theatre Company

When she moved to Baton Rouge in 1985, Dr. Ava Brewster-Turner saw a need for artistic opportunity in the Black community. She worked tirelessly, first with the Fourth District Missionary Baptist Association, then from her own home, to make her dream a reality. In 2002, UpStage Theatre Company was officially born, and, now in its 20th season, the nonprofit continues to inspire and encourage young actors in Louisiana.

Brewster-Turner spent much of her career as a teacher, and found that many of her students needed an outlet. She says her goal is to provide spaces for her students to express and explore their interests, from acting classes to open mic nights.

“I found that so many of them were interested in it because they were so creative, and they just needed a platform to nurture that talent,” she says. “So that’s what I do. That’s what we do here at UpStage Theatre.” 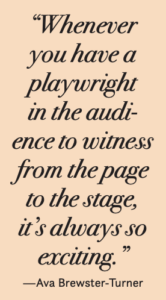 The theater at 1713 Wooddale Blvd. has played host to hundreds of shows, workshops and special performances throughout its two decades. Through its Emerging Playwright Project, up-and-coming writers can submit their scripts and potentially get the chance to see their work come to life on stage; meanwhile, actors are able to ask for advice and get feedback directly from the source.

“Whenever you have a playwright in the audience to witness from the page to the stage, it’s always so exciting,” Brewster-Turner says. “And then, of course, with the cast, being able to have a sit-down. And following every performance, we always have a talkback, and the audience is able to participate and ask the playwright questions.”

On September 25, UpStage will host “An Evening of Performing Arts,” a cabaret-style night of entertainment featuring dance, folk music, spoken word and a special preview of a new concept, “playback theatre.” Audience members will share their stories and actors will improvise a scene, essentially “playing back” the memory and giving the viewer a fresh perspective and the space to share.

After 20 years at UpStage, Brewster-Turner says she is excited to continue the theater’s legacy in Baton Rouge. “It doesn’t matter the size of the stage, or how big anything is, it’s what you have here and what you want to do here with it,” she says. “It’s been an awesome 20 years, and we’re looking forward to 20 more.”