Retired Pony for Sale. This caption on a Facebook post captured Dené Chenevert’s attention, right when she needed it most—planning ideal Christmas gifts for her kids. That’s all it took. Dené rented a minivan, laid down a tarp in the backseat, and sent her sister on a top-secret mission to pick up Joe Burrow. No, not the beloved LSU quarterback, but Joe Burrow the 350-pound pony who would soon be residing in the Cheneverts’ backyard. Dené’s husband Ryan arrived home later that day to what looked like an extremely large, furry dog grazing in his Sevenoaks Avenue front yard.

“I was in complete shock for a second,” says Ryan, recalling his initial encounter with Burrow. “I thought, ‘No way Dené brought home a horse.’ But she did. And although I was in freak-out mode at first, I quickly realized how cool owning a pony actually was.”

The Cheneverts’ daughter Delaney—no surprise—also deemed it cool to own a pony. Joe Burrow quickly became the 8-year-old’s partner in crime. The two often pose for photos that Dené then posts on Delaney’s Instagram page, @gymnast_de, which boasts 29,000 followers. The desire for pony close-ups extends beyond the family to runners, bikers and passersby who often stop and ask to take pictures with Joe Burrow.

“The Louisiana Marathon runs through our neighborhood, right around mile 17 where a lot of runners start to hit a lull,” says Ryan. “And although tons of people were lining the streets with their dogs to cheer the runners on, we stood out in the front yard with Burrow and people loved it. They were actually stopping to pet Burrow and laugh, probably out of disbelief. It was awesome getting to see the runners get pumped up again to keep going.”

Since neither of the Cheneverts grew up with livestock of any kind, they love giving this experience to their children. A small stable was constructed in the backyard, and Delaney’s responsibilities include cleaning the stall and the yard of Burrow’s fertilizer when she’s not at gymnastics practice.

“We are implementing that ‘farm kid’ work ethic,” says Dené. “Every day, Delaney gets up early to feed Burrow and spend time with him before school, and then she lets him graze for the day while she’s gone.”

The Cheneverts are not the only family with a fenced-in equine right beyond the patio furniture. Pony and miniature horse owners claim that these animals are gentle and surprisingly easy to care for. Lauren Barksdale Hill started showing horses when she was in grade school and has been around horses and livestock her entire life. But it wasn’t until three years ago that she decided to go miniature.

“Two of my aunts still have horses, and there were several miniature horses at one of their stables that I thought were the cutest things I had ever seen,” recalls Lauren, who lives in the Hundred Oaks neighborhood. “I was always begging my husband Carter to get one for the kids. Finally Santa brought Mini Pearl to our house.”

Likewise, Amanda Purdin Standish has spent her life around horses. Along with her family, Amanda owns a horse farm which breeds Arabian performance horses. In addition, she has been heralded nationally for her expertise in riding, showing and breeding. Amanda and her husband Rhein wanted their daughter to spend as much time around horses as possible and decided there was no better way to do that than get one for their backyard.

“Maybelle likes to be the star of East Lakeshore,” Amanda says of the family pony. “She loves to just hang out with us on the patio, but we’ve learned to make sure to shut the back door behind us or she will end up in the kitchen!”

And while most people would be quick to notice a large animal creeping into their home, it definitely doesn’t stop the four-hooved family members from making a grand entrance. According to Lauren, Mini Pearl often gets caught trying to make an inside appearance as well.

“She’s usually hangs out right outside my window, and sometimes she even knocks on my door with her hoof when she wants my attention,” says Lauren. “But on the off chance that she can’t get my attention, she loves just coming on inside. She’s always trying to sneak in the house when she can.”

See more photos in our gallery below: 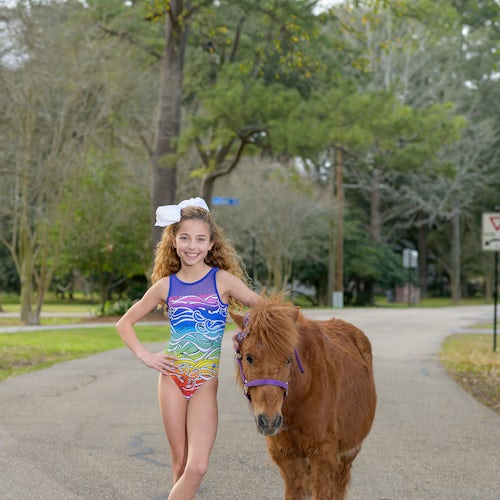 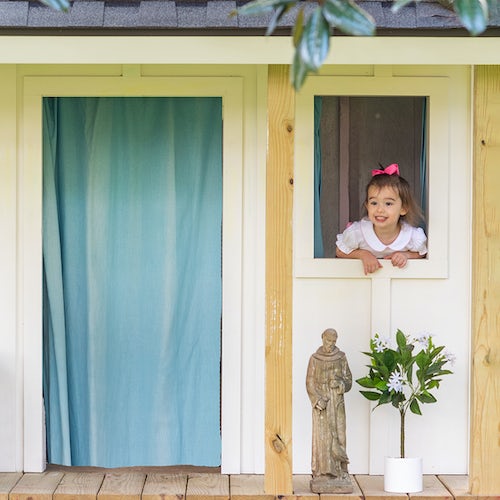 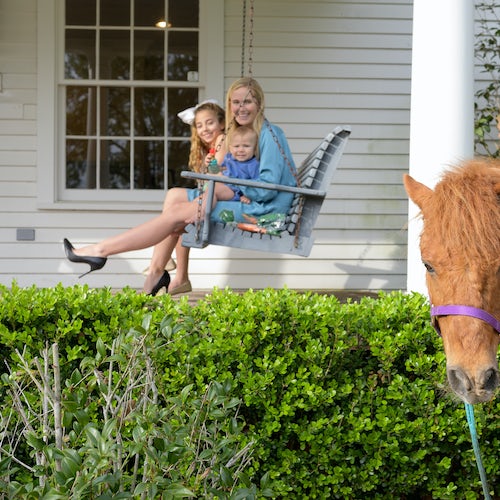 The Chenevert family keeps an eye on their four-hoofed family member. Photo by Joey Bordelon.