2020 Vision: Gwen Cotton turns pain into purpose with the launch of a children’s book

Gwen Cotton is surrounded by copies of her newly released children’s book "Petey & Murray Go for a Swim."

It was late one evening in the summer of 2013 when Gwen Cotton got a phone call that would forever change her life. An accident. A tragedy. A complete shock to the system. Her sister and her sister’s 3-year-old grandson had both drowned in her sister’s backyard pool in California. Her brother-in-law made the horrific call across time zones to Baton Rouge. The details were indeterminable, but it’s believed that her sister had a medical condition that caused her to pass out and slip under the water’s surface, and the 3-year-old went in to save her.

Two lives lost at once. 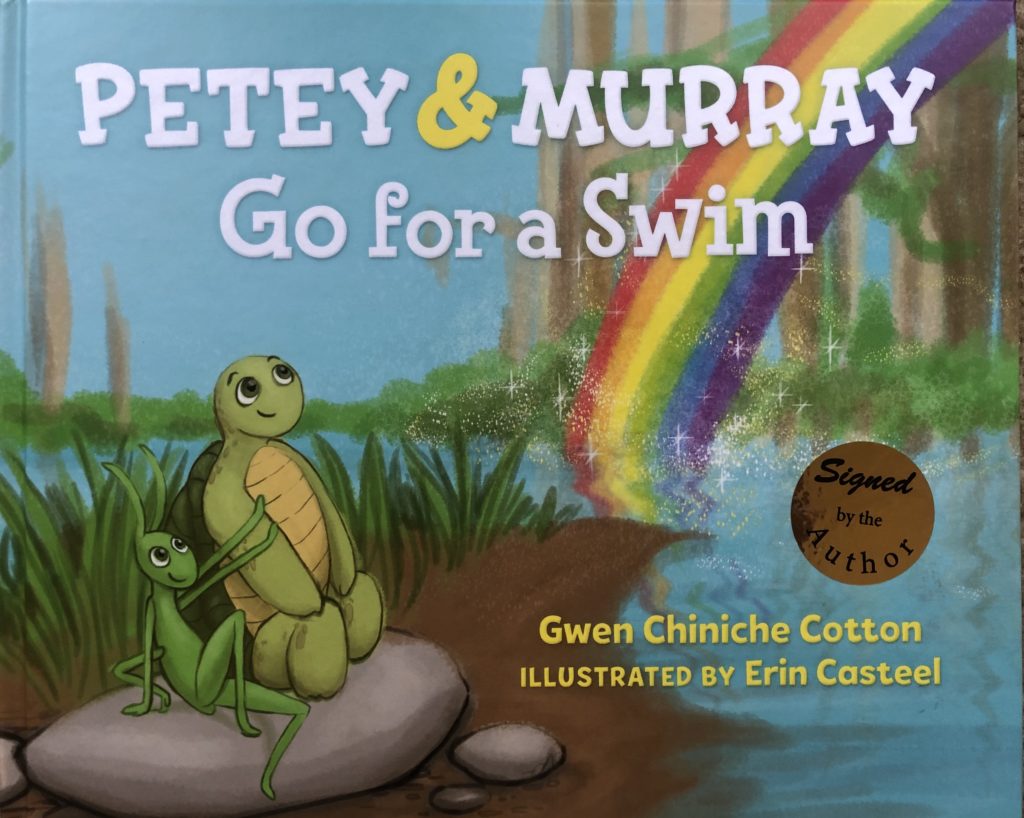 Cotton’s sister had been a strong swimmer, and her grandson had taken swimming lessons before. But he was still young and unaccustomed to the water. And even older children, Cotton says, often forget how to swim between one summer and the next. Over the next few months between bouts of grief, anger, insomnia and prayer, Cotton was determined that she had to do something. She just didn’t know what.

“One night I had the most vivid dream that I was going to write a children’s book to teach little ones a water safety lesson. I could see the characters. They were a turtle and a grasshopper,” says Cotton. She laughed off the dream, because she wasn’t a writer. “The next thing I know, I had another dream about the book, and I heard a voice that said the names of the characters were Petey and Murray. Well, those are my grandfather’s names!”

Cotton took the two vivid dreams as a sign that she needed to write something that would educate children on water safety. In addition to her sister’s tragedy, she also remembered many years before when her son and his friend got into her own backyard pool at the start of one summer. Surprisingly, her son’s friend—who had been on a neighborhood swim team the summer before—struggled in the water before Cotton swam in and pulled him out. All those memories informed the content of the book Petey & Murray Go for a Swim.

“I think children need a healthy fear of things that will hurt them” says Cotton. “This book reminds young children to call for help. Never jump in to help. The American Red Cross allowed me to use their slogan: Reach or throw. Don’t go!”

Cotton wrote the book pretty quickly, then she partnered with Ally-Gator BookBites Publishing House in Lake Charles to produce it. The first illustrations for the book weren’t what Cotton envisioned, so they went back to the drawing board for a second version. When Cotton sat down with illustrator Erin Casteel and explained the characters in person, the vision was better understood. But revisions meant that the fall 2019 launch date was being moved to March 2020.

“I was disappointed with the delay at first, because I thought I wanted to sell the book during holiday markets. But publishing it now has been a blessing,” says Cotton. “It’s coming out right when children are starting to swim again thanks to the nice weather. And children are home more, and around pools more, because of the stay-at-home orders. It’s the best time for this book to come out.”

Just days before this interview, Cotton read about a toddler who walked away from his brothers and sisters and quickly drowned in Toledo Bend. She stayed up all night crying and praying, hurting for the family and knowing their pain. The pain is always on the surface for Cotton, and that’s what continues to propel her purpose.

“I get emotional every time. I keep thinking I’m going to wake up and my sister will call me. And that baby will be alive,” says Cotton. “If this book saves one life, then I’ve done my job. But I hope it saves many.”

For more information on the book, go to its Facebook page here.