A pair of leaf-motif chandeliers emphasizes the symmetry that Breaux finds so striking in this formal living room. Below, hints of blue velvet coincide with the dining room. Photos by Chad Chenier

When interior designer Monique Breaux stepped into the Caribbean-style home of the Freeman family, she was struck by one thing: the symmetry. Sure, the deep wood floors were beautiful, and the crown molding a great finishing touch, but the home’s layout? That’s what took the cake.

“The home is proportionally beautiful,” says Breaux. “Looking at and being in the spaces—they just feel right.”

This home marks the 10th project that Breaux, the principal designer of POSH Exclusive Interiors in Lafayette, has worked on with this Baton Rouge family. And while, over the years, timeless design has always been the goal, Breaux says the emphasis in this home was on the joy that is found in the process.

“We wanted to lean into what makes them feel good now instead of stressing over what will be in style in a few years,” Breaux explains. “That made the whole process more lighthearted and fun, and that’s when you get your best looks.”

The couple’s underlying classic style helped steer the project in the right direction, given the formal nature of the home, with its intricate woodwork, lofty ceilings and sprawling floorplan. But Breaux says her job was to help her clients push the envelope and opt for edgier, statement-making pieces that juxtapose with the home’s style. Outside-the-box chairs were chosen for the head of the formal dining table and covered in Italian fabric sourced during one of Breaux’s trips to Manhattan. A starburst chandelier dangles from the ceiling of the casual living room space. And, perhaps most importantly, bold artworks are scattered throughout the home. “Art really is the ribbon tied around this project,” Breaux notes.

While all the art in the house is eye-catching, two works stand out to both Breaux and her clients: the piece in the formal dining room by Tony Mose and the mirrored work in the master bedroom sitting area by Tracey Mose. The New Orleans-based husband-and-wife duo completed the two large pieces specifically for these spaces. The eclectic style of each work meets the home’s formality in the middle, with royal motifs contrasted by vibrant colors.

“My clients were familiar with Tony Mose because they had seen his work in a project of mine in Manhattan,” explains Breaux. “And I felt Tracey everywhere in the master. It’s such an honor to be able to have them both in the home. They’re amazing as a team, and their works go so well together.”

While it was obvious where Tony’s work would fit in the dining room, the master bedroom area took some reworking before Tracey’s work could take a place of honor. Thanks to an addition, the bedroom was transformed into a suite, with two large spaces opening up to one another. “We decided to put the master bed in the larger space,” says Breaux. “Once we did that, the space seemed to open its arms up and hug me.”

From there, Breaux took to transforming the other area into a sitting area reminiscent of a hotel suite, complete with a table for last-minute work or a quiet breakfast, as well as plenty of mirrors, golds and velvets.

But while the finishes are all about formality, Tracey’s work sets the tone for something more whimsical. Butterflies in a lighter shade of blue than is used throughout the rest of the home, as well as graffiti-style letters spelling out “love” in hot pink, infuse the space with feminine energy. From there, Breaux used other touches of pink in the headboard and bedding to drive home the girly and romantic aesthetic that contrasts with the rest of the home.

“It is such a formal home, but we wanted to bring in a fresh vibe,” Breaux says. “They’re a young, trendy couple, and we wanted the home to show that.”

This pursuit of fun mixed with formal carries outside into the pool area, where salmon-colored cabana stripes cover the patio furniture. The pattern might seem like a bold choice, but for Breaux, taking such big risks makes sense outdoors where things like cushions have a much shorter life thanks in large part to south Louisiana’s nearly constant rain and humidity.

“Working on the outside area sparked so much joy,” recalls Breaux. “The goal was to brighten it up, and we had a roundtable to pick the color. I love what we decided on.”

And just as the cushions will likely need a refresh come next season, so too will the rest of the rooms at some point, explains Breaux. For her and the homeowners, nothing is ever totally finished. Part of the fun is the ever-transforming nature of a home and the design that fills the walls.

“We’re always changing with the seasons,” Breaux says. “Nothing is forever, and I love that these clients want to live in and fully enjoy the moment they’re in.” 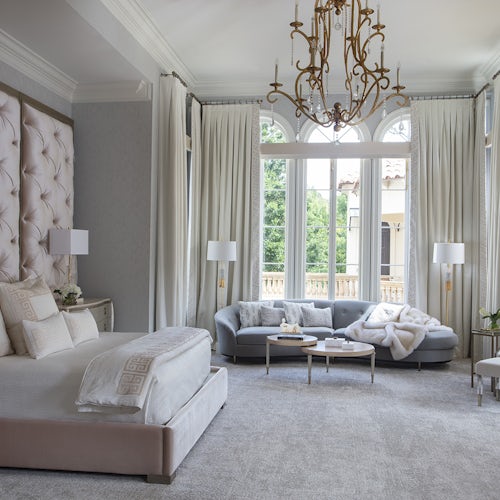 Carrying the pink from the neighboring sitting area, the master bedroom adopts a lighter hue in its towering velvet headboard and custom bedding. Floor-to-ceiling arched windows give the room plenty of light while granting views of the expansive property. 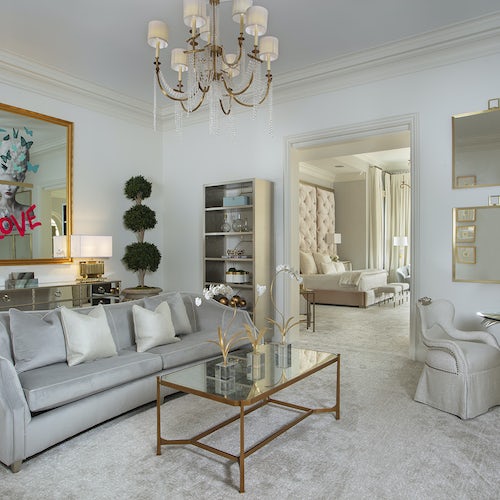 Rather than just a bedroom, the master is a suite, with a sitting area just outside the sleeping quarters. Breaux wanted the space to feel like a hotel suite, so she included things like a large couch as well as a table. A whimsical work by Tracey Mose hangs on the back wall, setting the tone for the space. 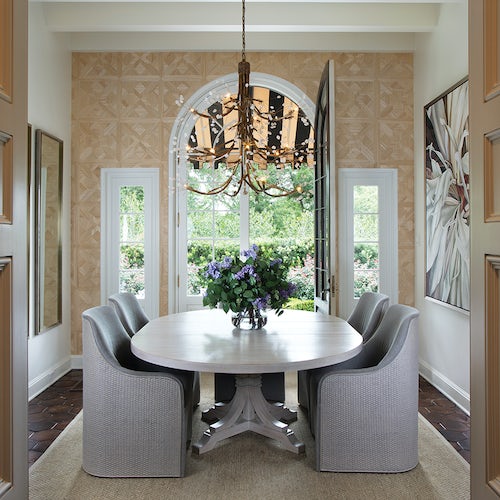 The nature outside the large casual dining room window is brought in in with the branch-like chandelier and floral art. 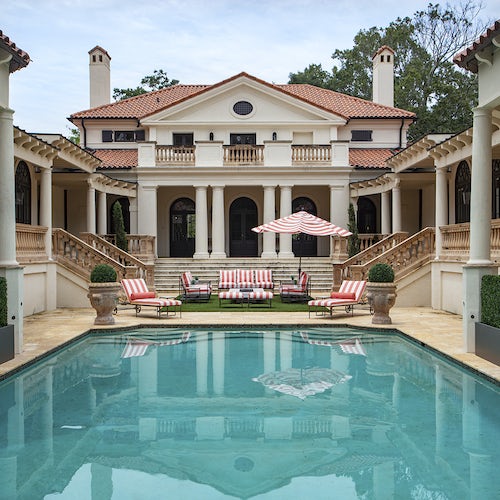 With most rooms offering views of the pool, curating the design of this outdoor space was paramount for Breaux. She and the homeowners went bold with cabana stripes in a lively salmon shade.