Driven to design: Locals putting the ‘re-creation’ in RV by overhauling their homes-on-wheels

Wren Mehaffey is excited to undertake the massive overhaul that her fixer-upper RV will require. Photo by Collin Richie

The grinning Dalai Lama hand-painted on the front door swings backward into shadow with a creak as Jay Cudd ambles across his porch to the massive streak of cream and mint green parked in his narrow Spanish Town driveway. It’s his 1973 Airstream, and sprawled across the white pleather couch inside is a vintage Fender bass he’s about to connect to a preamp plug-in on his phone so he can close the door, crank it up and “get away from it all.”

First, the longtime woodworker and craftsman takes a look around at the additions he’s made since he and his wife bought this vintage travel trailer five years ago. He runs his hands carefully across the new counter, a natural-edge elm slab he custom built.

“She’s nearly finished,” Cudd says. “And me? I’m in the middle of reinventing myself.”

Though much of the population heeded the CDC’s pandemic guidelines and avoided leisure travel in 2020, they didn’t stop planning their escapes. Sales of recreational vehicles skyrocketed during the early days of COVID-19, increasing more than 17% over 2019 sales by the end of last summer, according to the RV Industry Association. The same data set projects 2021 to be the best RV sales year on record.

“It’s about more than travel. It’s camping—which I never did as a kid—and finding adventure in places you wouldn’t typically go,” says Roger Jones, a Baton Rouge hairstylist who owns a 34-foot 1986 Airstream he renovated with his partner so they can relax for long weekends in new places within driving distance. “Every little update we did—new upholstery and carpet, cleaning the walls and hickory cabinets—is a thrill. It doesn’t feel like hard work because you see the beauty and potential that’s there.”

Whether with camper trailers like Jones’ classic Airstream or motorhomes like newer Winnebago-style RVs, many are looking at post-pandemic life not wanting to feel locked down—be that in their homes or in a traditional office job.

Wren Mehaffey is a Gen Z aerial performer who left a traditional path through LSU architecture school to work at a local grocery store while she pursues creative projects and renovates a 34-foot Fleetwood Bounder.

At the height of the pandemic, she bought the RV for a steal as a fixer-upper. Those renovations have become an aggressive hobby now, and her goal is to have it road-ready before the end of the year. “I’m excited about how terrible the condition is, to be honest,” says Mehaffey.

Her first car was a 1974 Volkswagen Super Beetle that wasn’t even running at the time of the purchase. “My dad and I took that first car on as a project, and that’s how I grew up. The attitude was always ‘We can fix this; let’s try.’”

Mehaffey’s family took a lot of road trips while she was young, and that adventurous spirit remains alive as she plans her future outside of architecture. “Traveling is the best way to make memories,” Mehaffey says. “And it really gives you an appreciation for life.”

For now, she has to fix a leaky roof and water damage in the bedroom—problems exacerbated by the amount of rain that hit Baton Rouge this spring.

Mehaffey hopes that once renovated, the Bounder changes her life. She wants to take a remote job and travel the country while working online.

“I hate the idea of a 9-to-5, where two-thirds of your year is already decided for you,” she says. “I want to break that stereotype and live with more spontaneity than that.”

RV travel and living offers opportunity for career freedom that 12-month leases and 30-year mortgages can rarely compete with. And when expanding horizons lead to some of the most beautiful landscapes the country affords, the benefits can be even greater.

Getting some “fresh air” has long been equated with feelings of relaxation and recharging, but in January an interdisciplinary team from Cornell University published new research boasting the strongest link between exposure to nature and increased mental health to date. According to their report published in Frontiers in Psychology, people experience decreased physical and mental stress after as little as 10 minutes spent in nature.

This combination of calm healing and routine-rattling adventure that natural landscapes can provide is what first led creative couple Max and Bonnie Kate Zoghbi to their Airstream purchase in 2015.

The filmmaker and his designer/photographer wife were facing a difficult time due to Bonnie Kate (a victim of the Aurora, Colorado, mass shooting—she was struck by a bullet in the knee, leading to seven surgeries and chronic pain) being scheduled to testify in the trial, and they both wanted something positive to look forward to, instead.

They decided on a 1979 Airstream Sovereign Land Yacht and named it Rosemary. The 31-foot camper had plenty of vintage charm already, and they added to that style with Bonnie Kate’s designer eye for creatively rustic touches like whitewashed slat walls, chalkboard-painted cabinet doors, shelving for planters, Southern-charm furniture, and custom wood-counter desks for video editing and branding projects on the go.

“It is worth every hardship, YouTube video, learning curve, misstep, headache, close call and thousand-dollar mistake,” Max Zoghbi says. “That’s because we made more new friends we now count as treasures, kept our old friendships deep, saw more of our gorgeous country, and experienced more technical learning curves and dangerous scenarios than we can count.”

The Zoghbis set off, blogging and documenting their life and developing new work with far-flung clients via their site beadventure.us. Hiking high into the amber crags of Zion. Feeling the fragility of smallness in the immensity of Yosemite. Gazing in awe at the eternal height of the redwoods. Life-altering experiences that come with the personal costs of time, money and letting go of “normal” life—not to mention muddy fields, bad axles and blowouts.

Commitment to a life of travel has to be total, even though it’s likely temporary, Zoghbi says. He encourages new buyers to dive into the active Airstream and RV subcultures for tips, advice and support. Even then, he warns, the road ahead can be long and winding.

“Expect your build-out to take four times as long and be twice as expensive,” Zoghbi says.

In the five years he’s owned that mint green Airstream parked in his driveway, Cudd hasn’t worried much about timelines—until now, that is. Transitioning from 30 years of woodworking, he’s reinventing himself as a high-end jewelry maker under the banner Jay Van Studios, online at jayvanstudios.com. What was once a weekend hobby is now gaining speed as his jewelry launches.

“Everything is so interwoven with other things,” he says, in a way that could refer to his creativity or to his Airstream or both. “It’s like a puzzle, interlaced. That’s because it’s built like an aircraft. There was so much aluminum left over after World War II.” 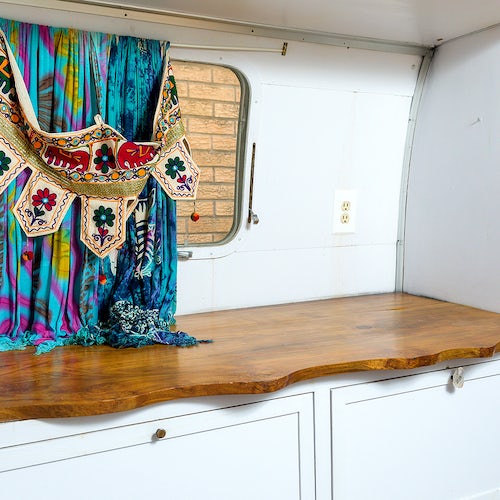 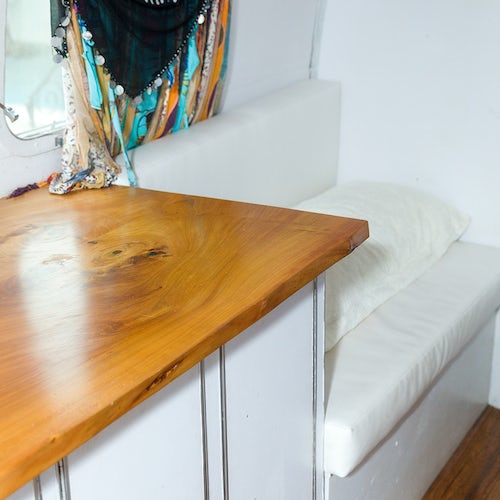 In addition to widening the cabin to add storage, he had to gut and renovate the bathroom. He enjoys thinking outside the box for solutions, but he recognizes that the scale of such a unique renovation is not for everyone. His advice? Buy a vintage Airstream that has already been updated.

“The old ones renovated are built so much better than the brand-new ones today,” he says.

Cudd plans to live half the year in the Airstream, traveling to jewelry shows nationwide, and the other half of the year at home making new pieces.

Next, he’s adding mobile solar panels so he, his wife and their pup Luna can boondock—camp off-grid without traditional electric power. A tour of national forests and state parks in between jewelry shows is on the docket, too. Cudd’s list is long, but he wants to make the time.

It’s this same sense of appreciating time and seeking daily adventure that makes Zoghbi wax philosophical about the life lessons he and Bonnie Kate learned on the road.

“Let nature envelope you long and often enough to help you grasp the truth that we are only here for a short time, and are privileged enough to enjoy some of it along the way with those we love most,” Zoghbi says. “That is what it is all about. That’s all it’s ever been about.”

MORE PICS OF THESE STREAMLINED ABODES: 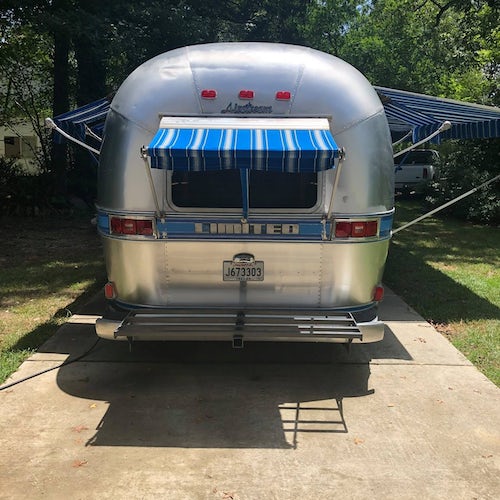 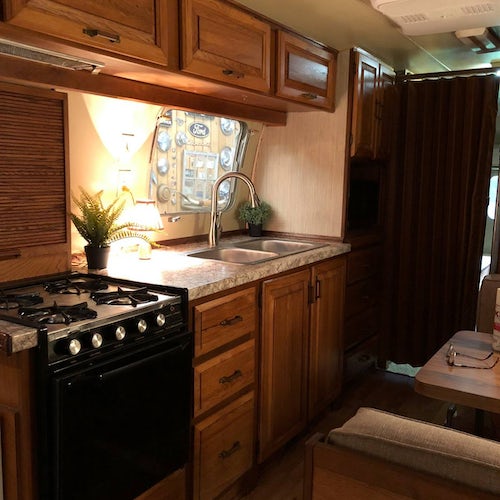 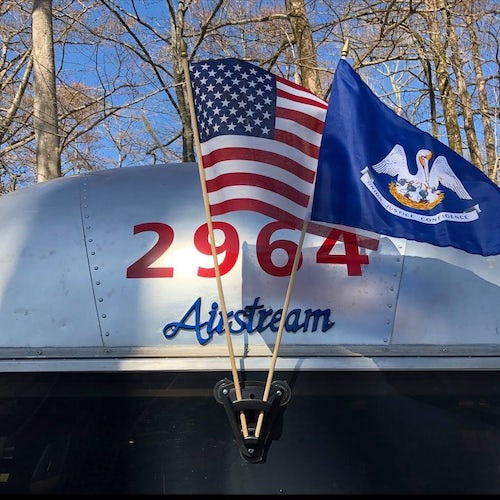 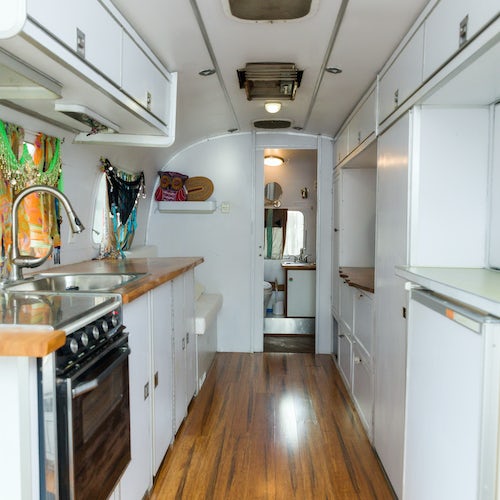 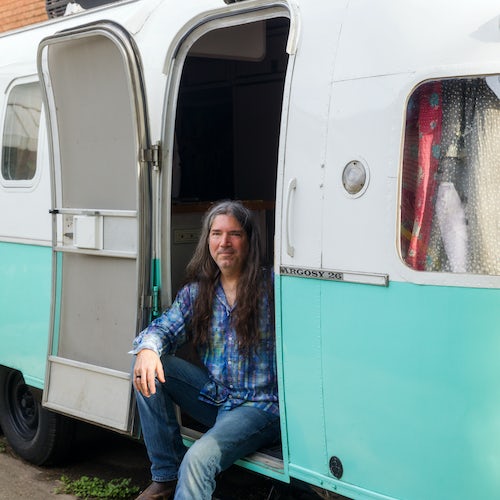 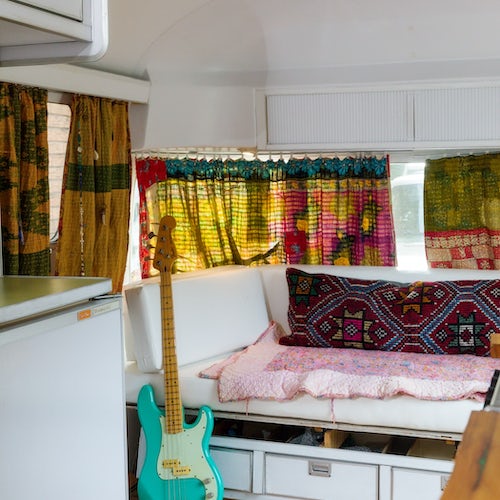 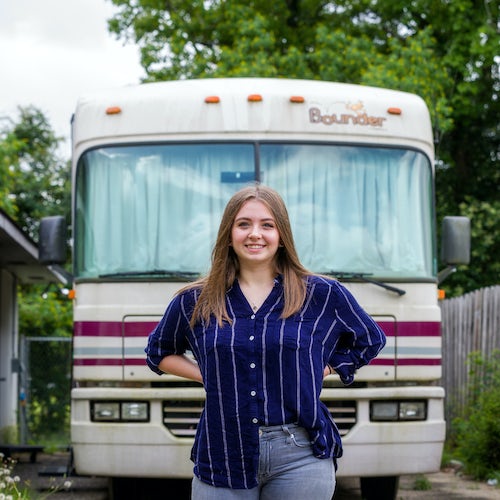 Wren Mehaffey in front of her Fleetwood Bounder. Photo by Collin Richie. 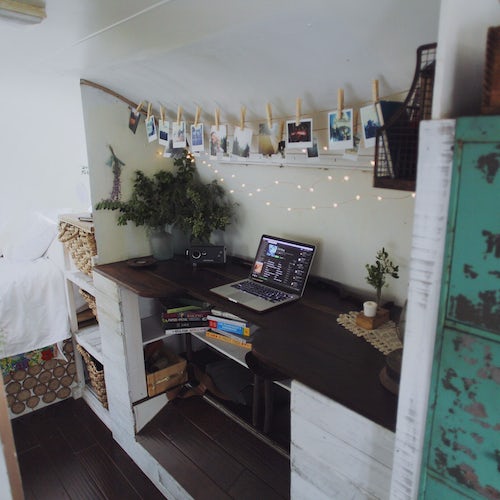 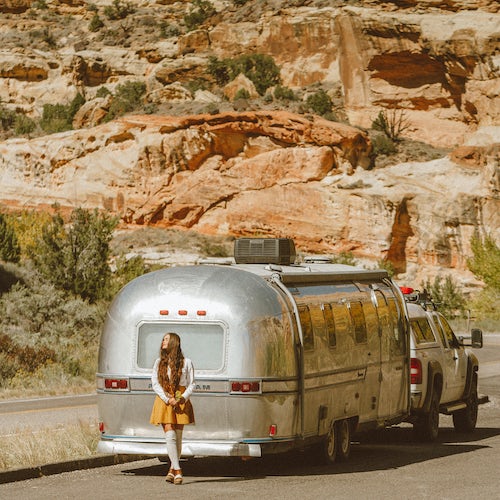 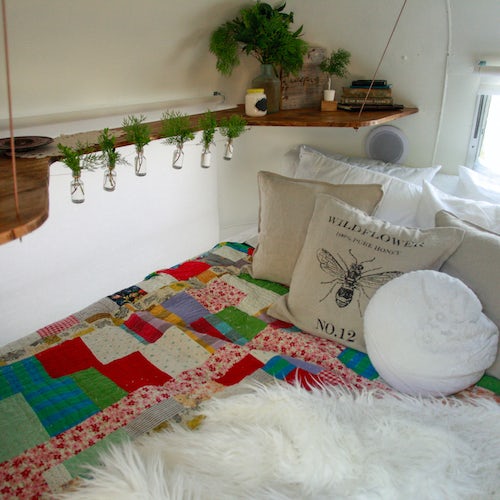