Old soul: Well-loved antiques get a wakeup call in a Garden District home with an eclectic spirit

A collection of antique oil paintings in their original frames hangs in this living room corner above a contemporary sofa from Monochrome and an antique armchair. “I love how the landscape painting pulls you in,” Roland says. The pillows are from Sunday Shop in New Orleans. Photo by Augusta Sagnelli

The dust had barely settled from this parcel of land’s previous life as a racetrack when Baton Rouge’s first planned subdivision, Roseland Terrace, was developed in 1911 south of Government Street and east of 18th Street. Naysayers warned the realty company: These lots will never sell! They’re too far out in the country! But would-be homeowners actually found themselves enchanted by the newly tree-lined streets named for flowers, with telephone poles neatly hidden in rear alleyways. The neighborhood was soon home to an eclectic mix of homes in styles ranging from Queen Anne Colonial Revival to pitched-roof bungalows.

That was just the kind of historic charm Laura Roland was seeking when she purchased a cottage in Roseland Terrace, which is now considered part of the larger Garden District neighborhood. It was 2017, and Roland was living in another old-school Baton Rouge area, Southdowns, but she couldn’t resist what the Garden District offered.

“It’s my favorite neighborhood in Baton Rouge,” she says. “I love all the old live oak trees, and I’m drawn to older houses. I’m just not a new-house-neighborhood kind of person.”

It didn’t hurt that Roland’s brother lives just a few streets away, or that she could easily run along the nearby LSU Lakes. But the deal was sealed when she walked into this house and felt it wrap its arms around her.

“I just kind of lucked out,” she says. “I hadn’t been looking long. I walked in, and the floor plan was so great. I said immediately, I need this house.”

Roland embraced the opportunity to tackle a renovation, her first on a home in which she was living. She tore up yellow linoleum in the kitchen and found a gift—the home’s original oak floors underneath. She gutted two full bathrooms, corrected drainage issues around the home’s exterior, and brightened up each room with new hues.

This personal project also became a jumping-off point for Roland’s interior design business, Laura Roland Interiors. Long a buyer and designer with her family’s store, Fireside Antiques, she was eager to highlight what she could do on a whole-house transformation. Roland drew on both her ongoing experience at Fireside and her interior design training at the Savannah College of Art and Design to bring this older home into the 21st century without losing its vintage vibe.

“I like to use antiques in a modern way,” she says. “All of the antiques I have here are very comfortable to live with—they’re usable, they’re very durable, they’re made of solid wood. I like to mix that with modern upholstery, but antiques are definitely at the heart of my home.”

Treasures found on her European travels, along with small curiosities found locally, also play a starring role in Roland’s décor. “I love to collect lots of different quirky things that have personality,” she says. “My house is really what I would call collected eclectic.”

Many of the larger furnishings Roland found during the initial decorating process seemed to have somehow been built for her new space, even though they had been constructed decades or centuries earlier. She was on a buying trip in France when she spotted the octagonal travertine table that now nests within the sunny confines of the dining room’s bay window. And a 10-foot-long antique English shop counter provides “all the storage I could ever want” in the master bedroom. Throughout the house, a harmonious blend of motifs and eras proves that Roland speaks the truth when she says, “I’m not a purist on style. I think it’s good to mix things up. They’re all my little friends.”

From unique materials to lost construction techniques, Roland says antiques give a home a kind of character that can’t easily be found in new pieces. “Politics influenced the styles and materials used, and technology and lack thereof influenced their craftsmanship,” she says. “Between the story of how you acquired it, the history you learn and the awe of construction, they give a home that lived-in feeling that it needs. To me, that is modern style.”

Roland stresses that the design process in her house is a layered one, always evolving as she finds interesting new pieces or gets new ideas. Ever since she was a child, she says she has loved the stories that antiques can tell, and by putting them together in her own fresh way, the story is getting a whole new chapter. “Antiques spike my curiosity,” Roland says. “I feel good around natural materials and the patina that only comes with time.” 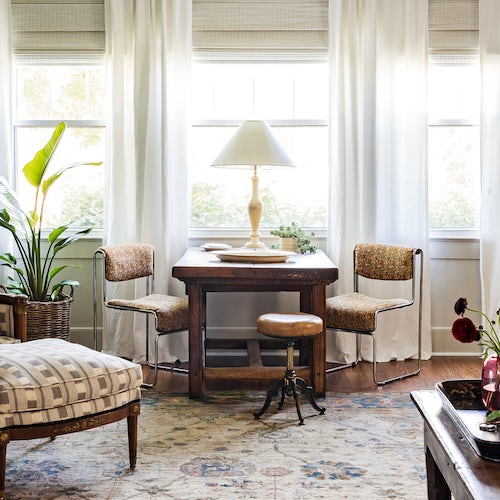 Set before the front living room windows, a pair of midcentury chrome chairs flanks a simply built desk with a writing surface made of two 3-inch-thick boards. A First Empire chaise is newly upholstered in Christopher Farr fabric and topped with a B. Viz antique tapestry pillow by Louisiana artisan Rebecca Vizard; Roland carries similar pillows made from centuries-old textiles at Fireside Antiques. Photo by Augusta Sagnelli 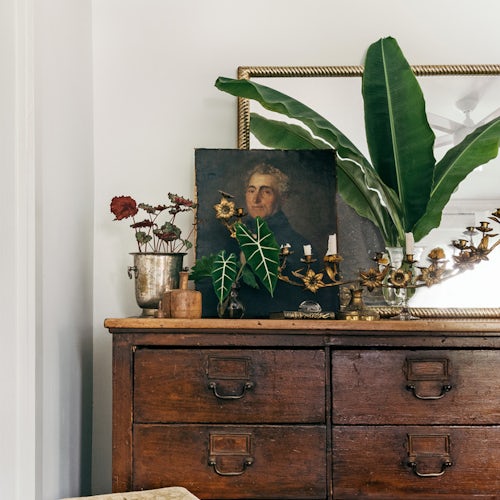 This English oak and pine shop counter, which covers one wall in Roland’s bedroom, is 10 feet long with 12 massive drawers. “It’s high on the list of my favorite antiques in my house,” Roland says. Photo by Augusta Sagnelli 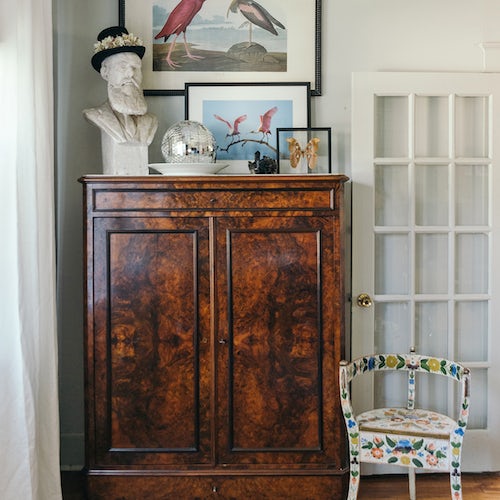 A hat-topped bust, an estate-sale photograph and a disco ball are the unlikely co-occupants of the space atop a small 19th-century French burl walnut buffet, while a John James Audubon print hangs above it all. “I couldn’t resist this little Swedish painted chair, either,” Roland says. “This space wasn’t planned—it came together with things I’ve collected.” Photo by Augusta Sagnelli 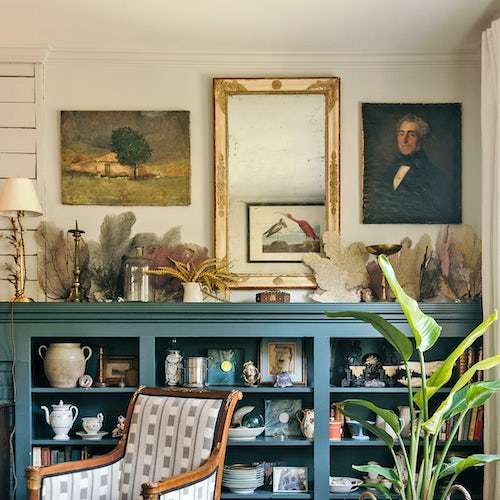 An existing wall of built-in shelves in the living room is ideal for holding Roland’s latest finds, from books and photo frames to pieces of fan coral and vases filled with flowers. Photo by Augusta Sagnelli 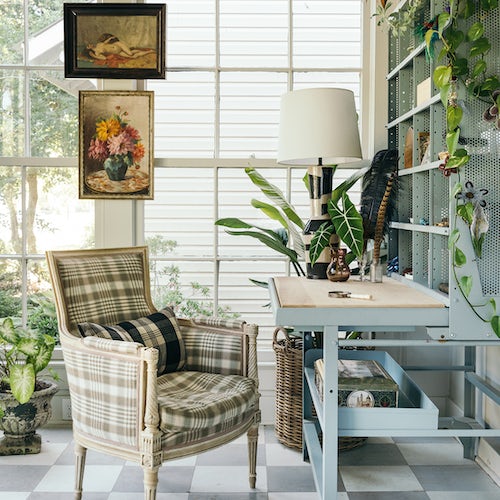 An old mail station desk sits in the sunroom, its cubbies perfect for organizing craft supplies and its top ledge a sunny home for a few of Roland’s many houseplants. Photo by Augusta Sagnelli. 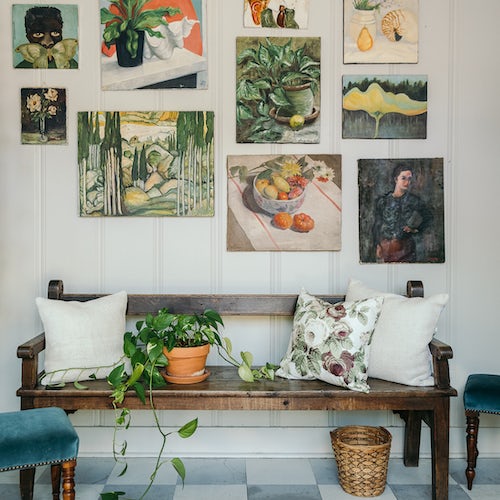 A gallery wall in the sunroom is filled with paintings ranging from French finds to pieces from local estate sales to early works by Ashley Longshore. Photo by Augusta Sagnelli 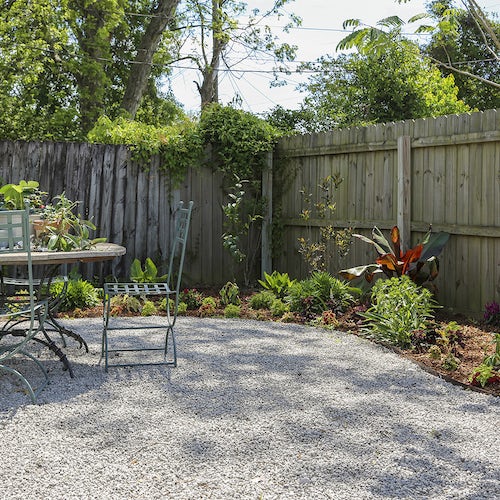 Roland replaced a rundown patio and patchy grass with gravel in the backyard, and softened the space with curvaceous flowerbed borders. Photo by Melissa Oivanki 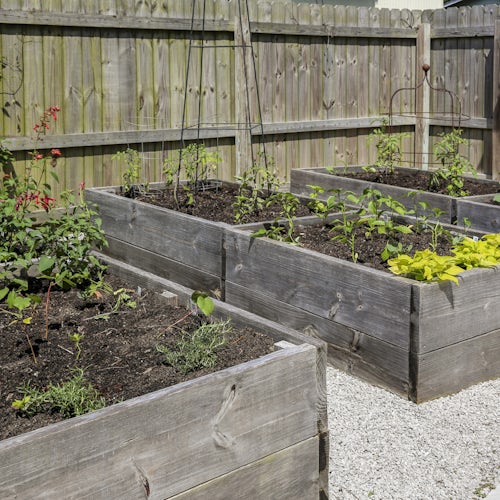 Three rows of raised beds occupy what was once a forlorn back yard. Roland’s favorite tomatoes are planted here, along with herbs, peppers, eggplant and squash. Photo by Melissa Oivanki