In 2003, Lance Armstrong was still on top of the cycling world, Arnold Schwarzenegger was elected governor of California, and Sara and Haze Brignac were closing on a fixer-upper home on Government Street with endless potential.

“It was just updated enough that we could move in and work on it as we lived there,” recalls Sara, the designer and owner behind local interior design studio Workshop 31 Twelve. “I have a degree in interior design and also in historic preservation, so an older home was our target. Government Street was not exactly the most desirable location, but we could afford it–barely!–and we loved the charm, mature landscape and, of course, the area.”

Over the 18 years since Sara and her husband Haze received the keys, the home has slowly evolved as the family itself changed. The births of their two daughters, Ainsley and Lucy Claire, as well as the addition of a fair few pets warranted a good bit of built-in storage, an expanded kitchen and even the construction of another bedroom and bathroom. But just as Sara and Haze maintained parts of themselves despite gaining new priorities and interests as parents, so too did the house hold true to its history.

Sara’s goal in renovating the home wasn’t to erase the owners before her, but rather to expand upon the legacy–and livability–of the space. The wood floors and other quirks, like an unusual ceiling height of 9 feet and 3 inches, that originally sold her on the home remain. And while spaces have been added, rearranged and redesigned, the flow and charm of the original structure still shines through.

“Older homes are like no other, and that’s really the point: they were built one at a time with details and spaces that were individual to whoever it was that originally built it,” Sara explains. “I always say that owning an older home is a love/hate relationship. You love all the uniqueness and character, but it takes thought, time and a bit of creativity to make the old work with today’s modern life. It’s worth the extra time and effort to preserve the uniqueness of your home.”

It’s not just the home and the Brignac family that have changed over the last nearly two decades, though. Mid City has seen big changes, from the narrowing of Government to two lanes to adding sidewalks to a resurgence in the area’s shops and restaurants. Happening alongside the Brignac renovations, these updates do much the same thing as Sara’s home updates: they preserve uniqueness.

“The changes that have come to Mid City during the past 18 years have been absolutely wonderful,” Sara says. “It is truly the neighborhood we knew it could be.”

Read on for a room-by-room analysis of how Sara stayed true to the home’s history while modernizing the spaces to accommodate her family. Click on the images for a closer look: 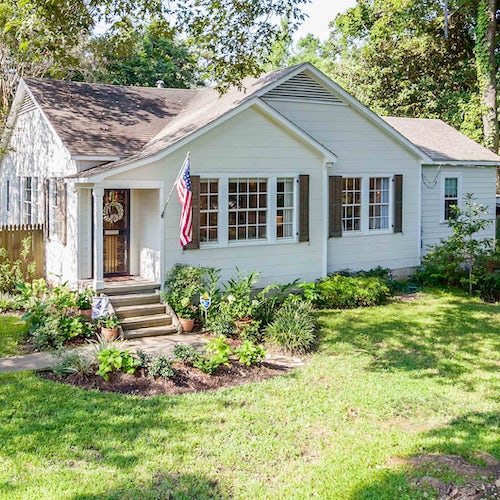 The charm of the house has always shone through for the Brignacs. A coat of paint and a little care to the landscaping gives the home plenty of curb appeal. 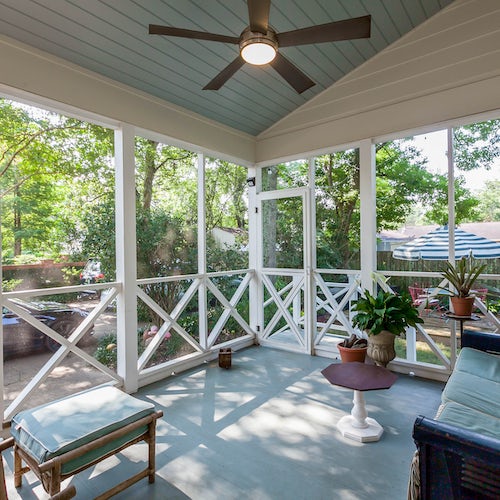 Sara notes that the back screened porch is likely her favorite space in the home. "We are out there all the time, from coffee in the morning to wine in the evening to games of cards to peeling crawfish. My oldest daughter even had a sleepover out there!" 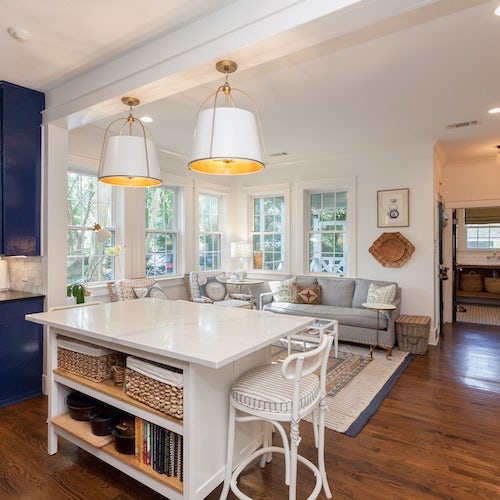 "It was originally a long and narrow space, so we opened it up and added enough space for a comfortable keeping area," Sara says of the kitchen. "It has really become the heart of our home." 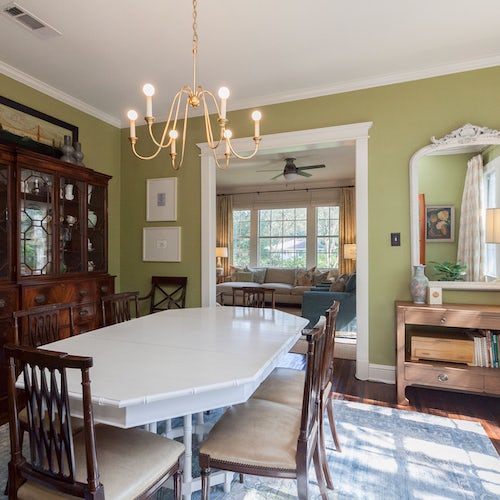 "I worked at an antique store a very long time ago and the walls in one area were painted a pear green," Sara says. "I have always loved it!" To bring it into her own space, she washed the walls of the dining room in Benjamin Moore's "Brookside Moss." 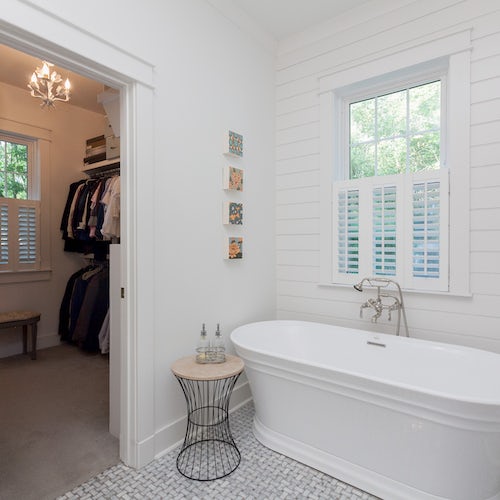 2017 renovations saw the addition of a master bathroom to complete the master suite. This new space includes a walk-in closet--uncommon in old homes of the area--and a soaking tub. 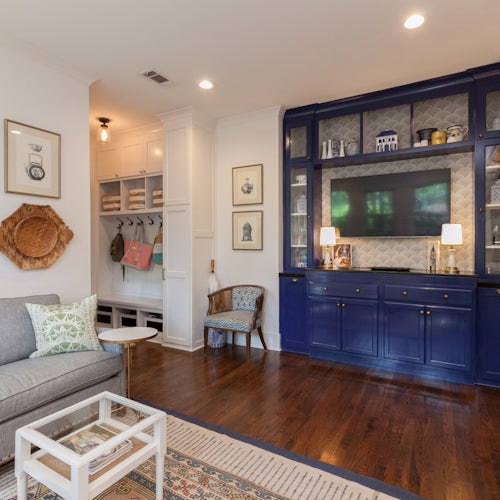 Benjamin Moore's "Admiral Blue" in high gloss is carried throughout the kitchen and keeping room space to make a statement. In the hallway, Sara used custom built-ins to create a mudroom ideal for backpacks and purses alike. "All the cabinets and closets go all the way to the ceiling, with shelving to maximize the use of the high ceilings," Sara notes. 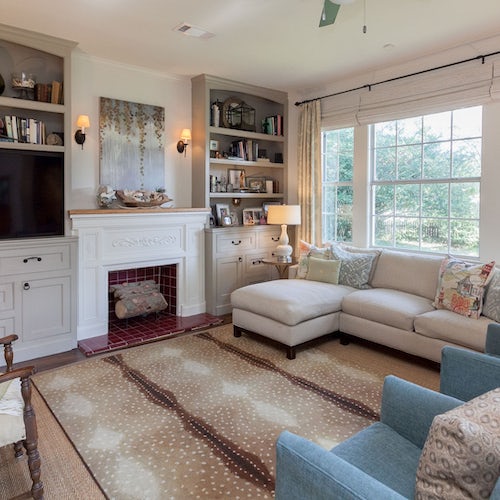 "The front living room is one of my favorites," Sara says. "It's a little more removed from all the action of the house but we have game nights (lots of hands of Uno!) and watch movies up there." More built-ins make the space functional while layers of rugs, pillows and colors give the room a cozy feel. 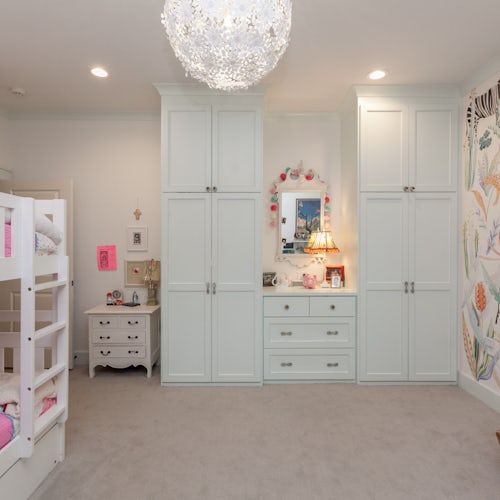 In addition to a statement wall featuring vibrant wallpaper, built-in storage was a major part of Sara's design. "When we added on the girls' room, I designed built-in wardrobes with shelving and cubbies inside, along with hanging space so that the girls could organize their school uniforms from their team uniforms and dress clothes from play clothes."