A new view: A lakefront home was designed to take advantage of its setting

The design of the family room embraces the connection between indoor and out, with floor-to-ceiling windows on three walls of the breakfast area. For the draperies, interior designer Meghann Landry chose a large-scale linen fabric from GP&J Baker in a lotus print that harks back to the hues of nature. The bluestone breakfast table literally weighs a ton and was ever-so-carefully carried to its permanent resting spot by a dozen men. Photos by Melissa Oivanki.

Like riders on a carousel, they glide by in groups of two and three all day long, powerwalking and pedaling while peeking at the newest structure along this marshy inlet of University Lake.

The most dedicated and most observant of these mile-loggers have seen this property transformed over the past few years. A former home here was leveled. Dirt was stirred and new foundations were poured. Bricks were laid. Doors were hung. Flowerbeds were filled around a new iron fence. Finally, the elegant finishing touches are all in place, and though they may be intent on pounding the pavement, passersby can’t help but pause their workouts.

“Every time I’m out front, people stop and ask about the house,” says interior designer Meghann Landry of McMillin Interiors, who along with firm founder Bill McMillin helped guide Sandra and Bill Balhoff through the process of building this home in one of the most picturesque parts of town.

The Balhoffs broke ground on the Greek Revival-style residence during the summer of 2016, and—just in time for their 40th wedding anniversary this month—the couple are now settling in and enjoying seeing their vision of a gathering spot for large groups of loved ones come to life.

“We both come from big families,” says Sandra, “so it was our hope to have an environment that was welcoming to our children, grandchildren and other family members.”

The Balhoffs had lived in Westminster for many years, but they dreamed of a place where they could “spread out and make memories,” says Sandra. “After searching the Baton Rouge neighborhoods, we kept returning to the lakes and LSU area.”

Finding a design team for their forever-home project was an easy task. They had worked with McMillin since they were first married and had become so close to the designer that their children affectionately call him “Uncle Bill.” Along with McMillin and Landry, they called on architect Tommie Cockfield of Cockfield Jackson Architects and builder Chad Roper of Alfred Roper Construction to translate their ideas.

“We’ve been with them since the beginning of this project—from before the beginning, actually,” says McMillin. “There is nothing they are looking back and wishing for now, because they really thought about everything before the plans were drawn up. We had an initial six months of meetings where we were simply assigning spaces and considering details that would be important for daily use. We wanted to have everything laid out in the way it would be most functional.”

The couple’s priority list of features for their new home included unobstructed views, a big room where family members could congregate, and a second, smaller living space for quieter moments. Cockfield helped ensure that the home’s scale and proportions would perfectly suit its classic style; each of the two stories has 12-foot ceilings, for example, instead of the more often seen 9 or 10 feet on the second floor, and the porch and balcony are a generous 12 feet deep. The architect also added traditional Southern details including dentil molding, pilasters and square columns, and ornate iron railings on the exterior, along with a graciously wide center hall and transom windows over interior doorways.

Construction ensued, with Landry collaborating with the Balhoffs on the selection of everything from appliances to stone to plumbing and light fixtures. While there may have been a myriad of choices to make, Sandra and Bill were set on one key detail: a timeless blue-and-white palette. “They love blue,” Landry says. “We used that as the main theme and then added other colors that would enhance each room. It’s as classic as the design of the house is, but it still feels fresh.”

The chosen hues were incorporated into a striking array of patterned draperies from centuries-old across-the-pond textile makers including GP&J Baker, Bennison and Sanderson. Underfoot, each custom Stark rug reflects the tones of the window treatments. “They wanted everything to be a little lighter than in their last house,” Landry says.

All of the furnishings are also custom pieces that fit the scale of the rooms they inhabit, the designers note. Even the dining-room wallpaper—a handpainted 18th-century botanical design by Gracie—was altered to have its branches “thinned” for a less busy effect.

Landry also paid great attention to making a statement in each room through lighting. The wide entry hall is home to two antiqued mirrored-glass chandeliers in a subtly Art Deco style, while an updated two-tier crystal-beaded chandelier hangs in the dining room, and the kitchen island is illuminated by a shaded three-light pendant in antiqued brass. “We didn’t want to give them lighting that would be expected,” Landry says.

With the home built to accommodate family members of all ages, it was essential to include kid-friendly touches, including stain-resistant upholstery and easy-care brick floors in the family room. Just beyond the center hall, tall French doors lead to another fun feature: the spacious media and game room, which holds both a billiard table and multiple levels of seating set before a 126-inch screen. Even with the doors open, the leather theater seats are hidden from sight until a visitor steps inside. “They wanted it to be a functional space but to still be pretty,” says Landry, who used classic patterned fabrics on curtains and upholstery that minimize the media-room vibe. “Their family is really so important to them, and it just makes me happy that they can enjoy this space and the rest of the house together.”

The designers also managed to incorporate meaningful pieces that had been with the couple for all of their 40 years together. The Henkel Harris bed that they obtained from McMillin when they were first married is once again the centerpiece of their master bedroom, but more modern painted nightstands give it an updated feel. And the dining table that once belonged to Bill’s parents is still a hub for big family meals. The location may have changed, but the emphasis remains on sharing time with the ones they care about most.

“This is the first house we have built, and we heard stories of how difficult and stressful a process it usually is,” says Sandra. “Our experience was not like this at all. The professionals that we used were so talented and worked so well together that it was actually a fun experience. We are blessed to have realized our dream.”

See more pictures from inside this home in our gallery below: 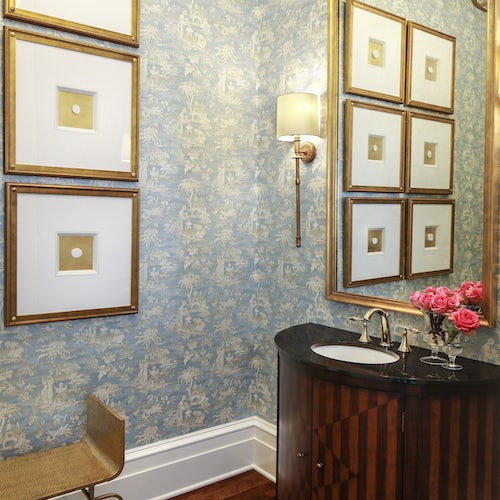 Gilded details in the toile-wrapped powder room include a half-dozen framed antique intaglios, a curvaceous bench and a Louis Philippe mirror. The wallpaper here and throughout the house was installed by Clay Fairbanks. 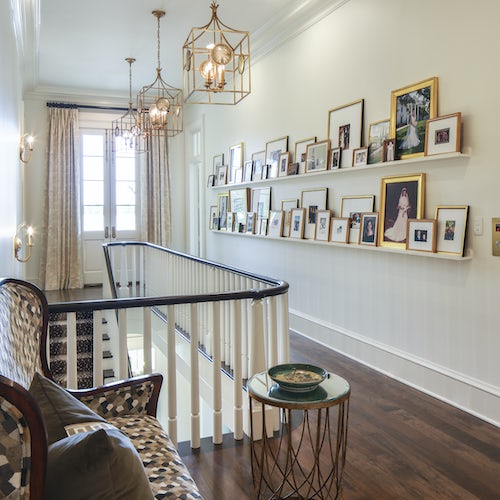 With dozens of treasured family photos in hand, Landry created a clean-lined version of a gallery wall on the second-floor stair landing, using two ledges to display pictures in varying sizes. 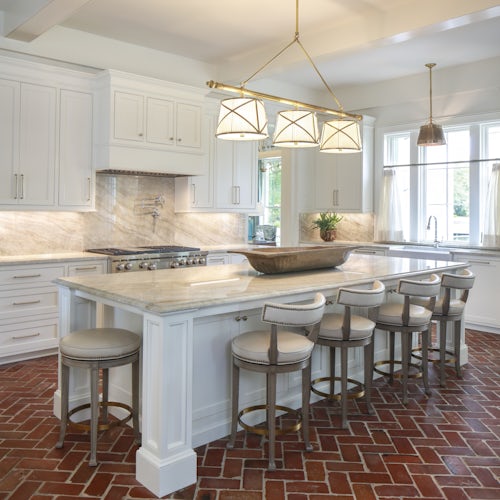 In the kitchen, Taj Mahal quartzite countertops and backsplashes contrast with warm brick floors set in a herringbone design. Though the custom light fixtures and cabinet hardware are in brass, the McMillin team intentionally stuck with chrome for the faucets throughout the house. “Chrome will never go out of style,” says McMillin. 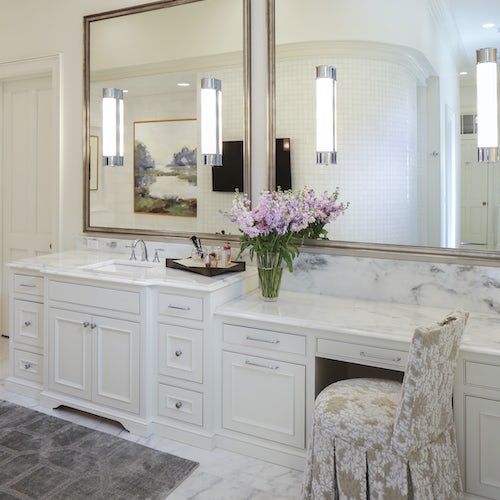 “Calm and classic” were the mantras inspiring the master bath design, says Landry. This room features the designer’s signature touch of installing sconces on the mirrors rather than beside them; peer into the reflection and you’ll also see the dramatically curved tiled outer wall of the oversized shower space. 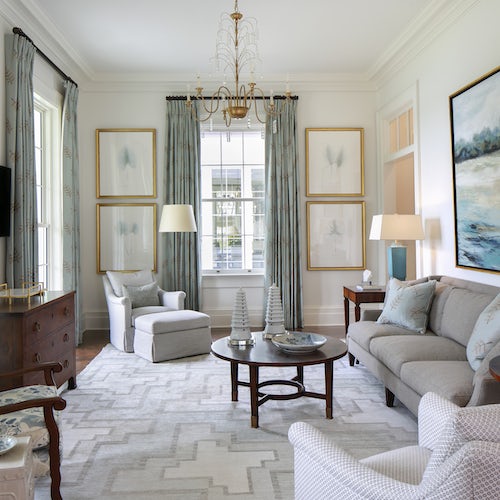 This smaller living room has a light and airy feeling, with Travers leaf-patterned draperies and an open-arched chandelier. Baton Rouge artist Mike Klung created both the large painting over the sofa and the painted leaf artworks that flank the far window. The rug is a custom geometric design by Stark. 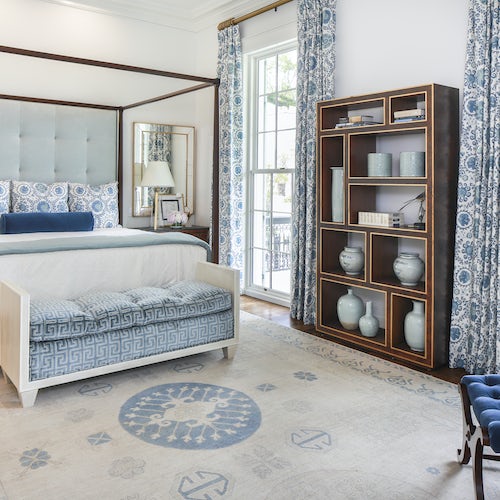 A classic color scheme feels fresh in this downstairs master bedroom, home to an upholstered canopy bed and a custom Stark rug that McMillin says is his favorite. Small sketches by local artist Nicholas Klung lean against gilded mirrors on the nightstands. Tall windows offering unfettered views of the lake are framed by subtly botanical-style linen draperies from Carleton V. 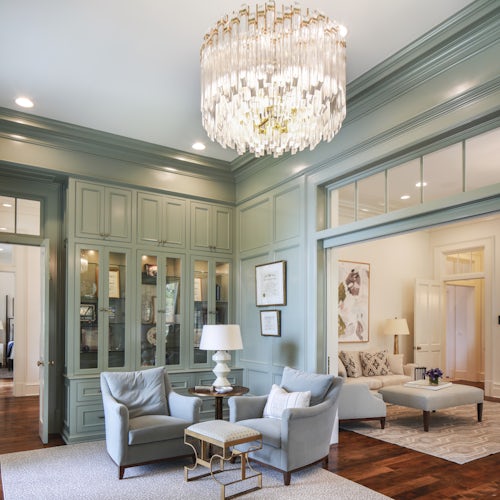 The study stuns with boiserie paneling in a custom gray-blue tone and an Art Deco-inspired brass-and-crystal chandelier. Double pocket doors beneath an extra-long lineup of transom windows lead to the master bedroom. 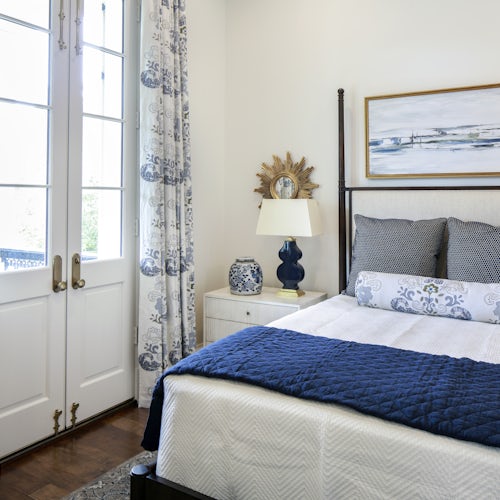 A pretty Pierre Frey print on curtains and a lumbar pillow continue the blue-and-white theme in this guest bedroom. The painting over the bed is by Mike Klung. 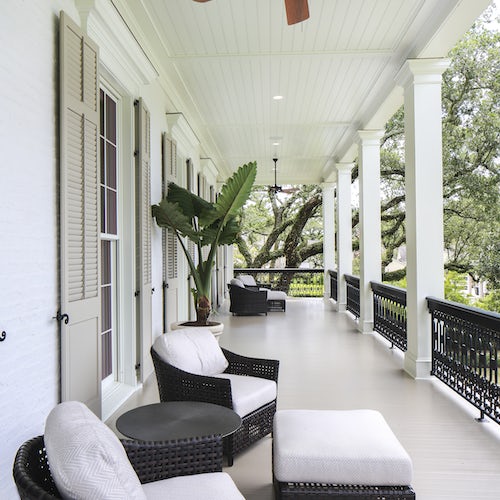 The second-story balcony was built for watching lakeside sunsets. Both this balcony and the front porch below are 12 feet deep, which allows for shade and privacy. 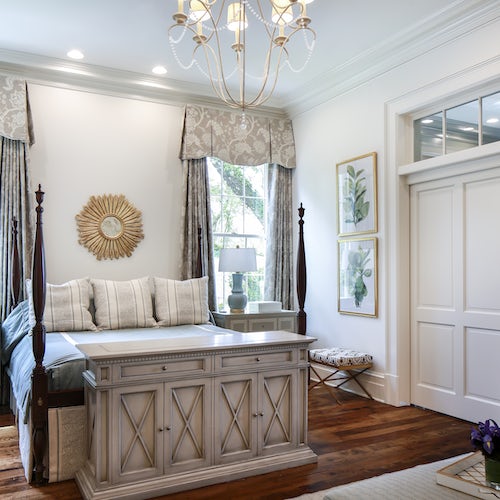 Softer shades of blue, sand and ivory give a serene feeling to the upstairs master bedroom, which features draperies in a Sanderson tree of life jacquard design as well as a retractable-TV cabinet at the foot of the bed. The Henkel Harris bed and chest are the same ones the couple acquired from McMillin when they were newlyweds 40 years ago. 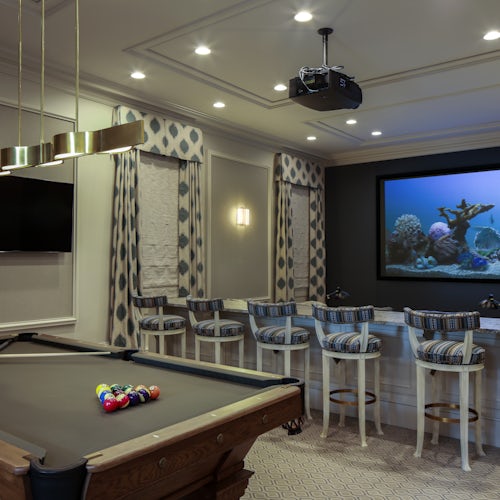 With its place of prominence just beyond the entry hall, it was important that the media room convey an elegant atmosphere. A billiard table and bar stools give way to two almost-hidden lower levels, the first featuring a row of leather theater seats and the second containing patterned chairs and a loveseat. Audio Visions was responsible for all of the automation and A/V elements of the house, including this 126-inch screen. 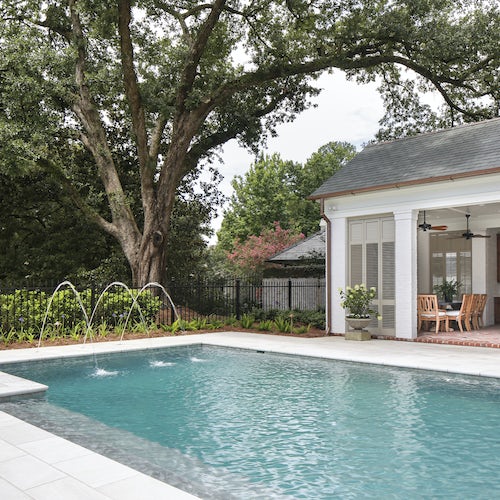 Quartzite tile surrounds a pool by Russell Pool Company. This area, which features a screened porch off the family room and a detached outdoor kitchen, provides plenty of room for grandchildren to splash while adults enjoy the shade. The home’s lush setting is the work of landscape architect Bill Reich.