This sampling of items that have sold on @thefindbr account shows how Tarleton and Parker arrange items into vignettes that help potential buyers get a sense of how merchandise could be used in their homes. Photos courtesy The Find

When Nicole Tarleton and Michelle Parker first met, their bond seemed pretty ordinary. Their young children went to the same school, they shared mutual friends and they were both a little design-obsessed.

“We would constantly be bouncing ideas off of one another,” Tarleton says. “She might try some of my pillows and I might try out some of her lamps and we’d end up either exchanging or buying them from one another.”

But it wasn’t long after that the duo gained a bit of a reputation among their peers, who capitalized on Tarleton and Parker’s love of all things decor (and Facebook Marketplace prowess) to give their own homes a sprucing up, too. Tarleton and Parker would step in to help a family member sell a chair secondhand, or connect a friend looking for new throw pillows with another who was interested in selling theirs.

In 2015, a neighbor approached Tarleton with their biggest request yet: to host a high-end carport sale to clear out a storage unit of furniture, art and more that had been collecting dust. The pair agreed, selling the entire inventory in three hours and raking in $15,000 in cash.

It was then that Tarleton and Parker knew that what they had was more than just a bond. They had a business.

Fast forward to September 2016, and the duo had launched a small operation known today as The Find. Operating out of a warehouse in Port Allen, the pair hosted sales two to three times annually for the next four years, with inventory collected from friends, family and connections. 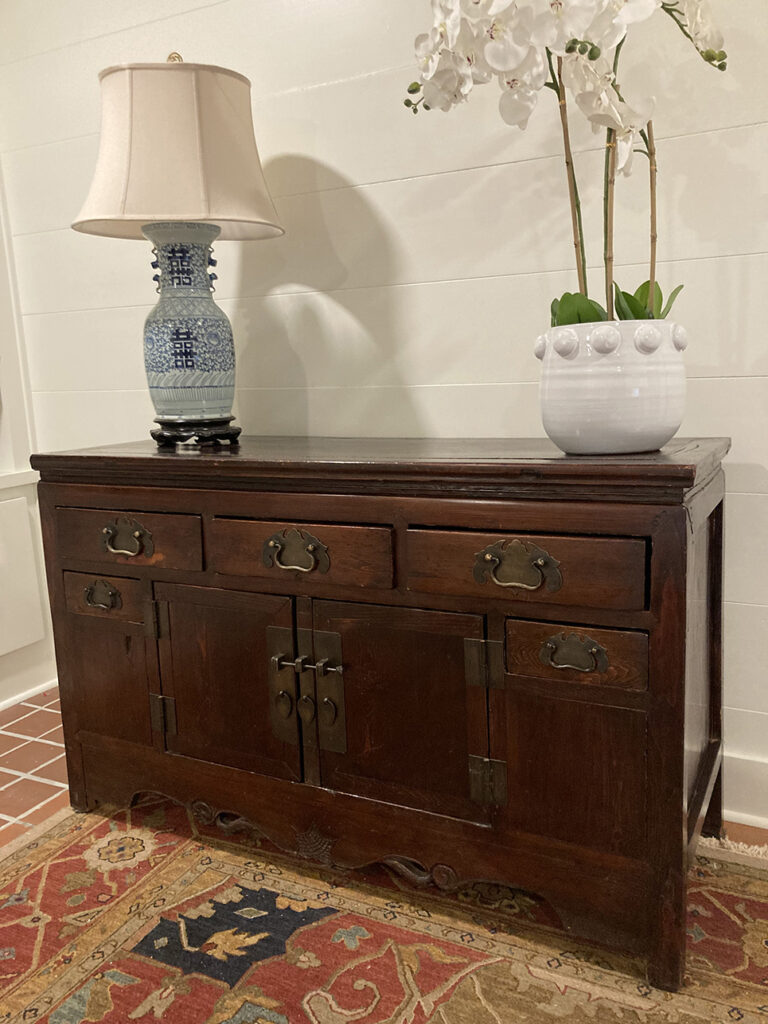 They’d arrange the items into vignettes around the shop, often lugging furniture over the Mississippi River Bridge and through the space’s tight hallways, all to take home about 40 percent of the earnings from each piece—the rest going to the seller. “It kept me busy. And it kept me from rearranging my house,” Tarleton jokes.

By their March 2020 sale, Tarleton and Parker had gotten into a groove. “We had a lot of inventory, and then … quarantine,” Tarleton says.

They canceled The Find’s spring sale and for the first time posted photos of items on Instagram, allowing users to agree to purchase them in the comments section of each post. First up was a white chair, next a linen pillow, and later a framed print of a row of oak trees. Quickly their followers began to catch on.

“I basically started posting inventory almost every day. And it sold like crazy,” Tarleton says. “People were bored or decided to start a home renovation project or they wanted to clean out and redo. We sold a lot of stuff in the next six months.”

Now they have no plans of going back to their old ways. Instead, Tarleton and Parker are joining a growing group of high-end consignment and antiques sellers that operate purely via Instagram comments, DMs and texts. They looked to (and even consulted with at times) accounts out of New Orleans, such as @estately.nola, to better understand the ins and outs.

They ironed out a basic contract for sellers and outlined ways to allow Instagram users to purchase through their page. So far, Tarleton says, it’s working.

In recent months, empty nesters and downsizers have contracted the pair to sell the entire contents of their home via Instagram. And the business’s follower count and potential buyer base continues to grow—these days amassing nearly 3,500 users or about triple the following the small business had when it was operating across the river.

Of course, there are growing pains. Parker is now tasked with tracking inventory as they acquire more and more items for sale. Tarleton manages the constant stream of comments and messages @thefindbr gets each day and helps coordinate pickups between sellers and buyers.

But they’ve learned a lot, too: Dining tables and upholstered items get scooped up quick these days, Tarleton says. Bedding and drapes are a no-go. A pair of lamps looks better. And artwork is tricky. And they’re beginning to strategize with posting times and daily themes to keep their followers wanting more, like Table Tuesday and Wall Art Wednesday, and not wasting time by posting on Friday when “nothing sells,” she adds.

Still, at their core, the pair’s mission hasn’t changed all that much as their hobby has evolved into a thriving social-media-based operation. They still put their proclivity for connecting people with great design options to use—only now for a wider network and on an almost daily basis.

“If I know somebody’s looking for an item, I’ll share it with them before I post and see if they’re interested. I try to ask people when I know that they’ve just moved, or are renovating,” Tarleton says. “I kind of keep what they’re looking for in the back of my mind.”

Their loyal followers? They’ll know when she finds it.