Frank Lloyd Wright might just be the most recognizable name in 20th-century architecture, with buildings like Fallingwater, the Guggenheim Museum, or even the larger Prairie School movement still familiar sights to those with only the slightest knowledge of design history. So when one of his final projects, the Fawcett Farm in Los Banos, California, hit the market last year for $4.25 million, buyers came face to face once more with the trademark styles that made Wright one of history’s greatest game-changers.

Completed two years after Wright’s death in 1959, the 96-acre ranch recently underwent a preservation and renovation project under the guidance of Wright’s grandson, Eric Lloyd Wright, preserving its 4,000 square feet complete with seven bedrooms, six full baths, overhanging eaves and ample built-in storage that flows seamlessly into the shapes of each room. The home can be considered one example of “Usonian” architecture, a name coined by Frank to describe his vision for the future of American cities and buildings.

To learn more about the special elements behind the home, as well as to get an explanation of some of Wright’s trademarks, we reached out to local architect Kevin Harris—who actually has a personal connection to the famed architect’s style.

“I have been a fan of Frank Lloyd Wright’s architecture since I was five,” he says. “That’s when my father engaged his first cousin and architect, Roy Guderian, to add a Usonian den and kitchen onto my childhood home. Roy was a Taliesin Fellow working under Mr. Wright in the 1950s, and lived with us while designing our additions. Roy and I got along so well, that my mother let me be his shadow that year verses sending me off to kindergarten. I now reference that early experience and exposure as my alternative kindergarten.”

Keep scrolling below to see what Harris had to say about some of Fawcett Farm’s most striking rooms, as well as more images from the home. 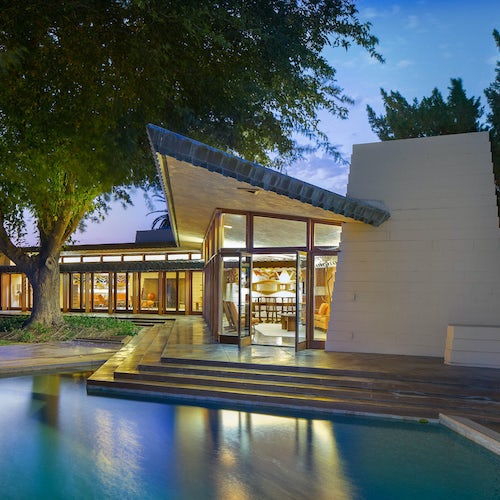 "This iconic view from the swimming pool is a signature image that supports Wright’s argument that one’s house should be a work of art. Mr. Wright’s 'Natural House' designs used simplified methods of construction and a limited number of materials. A specific pattern was to guide both structure and ornament. The Fawcett Farm was constructed using concrete blocks, natural wood, plate glass, copper sheathing and stained concrete. These common materials are arranged in reference to a triangular geometry. This abstract pattern, or grammar, becomes the ornament as well as the structure. The broad overhang uses the triangle pattern to shape its termination over the swimming pool. This pattern is scored into the stained concrete floors and exterior paving. Even the light fixtures are recessed triangles, and the pattern on the copper fascia undulate accordingly in triangular fashion." 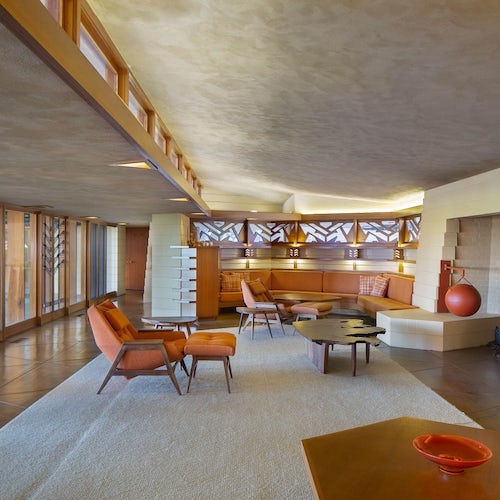 "The intersection between the flat roof facing the courtyard and the sloped roof over the living room allows for a row of clerestory windows that introduce natural light deep into the interior. Here, the ceiling serves as a light reflector. Electric lights are used, but are incorporated into the structure either as recessed ceiling fixtures or on top of ceiling 'trays.' One never sees the glaring intensity of a light bulb. Rather, one experiences the house itself becoming the light source, reflecting both natural and electric light. A large signature fireplace, open bookshelves, an earth tone color palette, and stained glass windows reflecting the geometrical pattern or specific 'grammar' of the design all combine to articulate a calming space for people to gather, discuss the day’s events, or to simply relax." 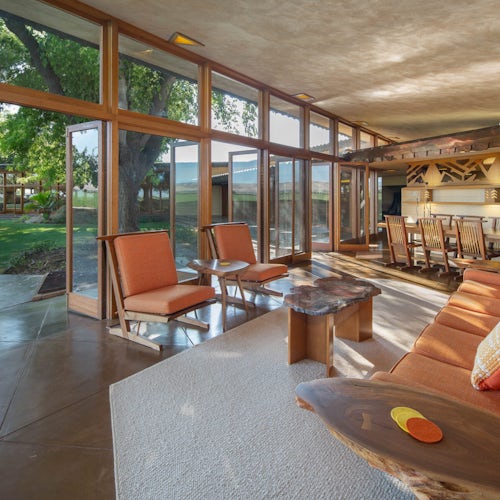 "This magnificent living room exemplifies Wright’s preference for the open floor plan: to make the whole floor a single room, using walls sparingly and only to screen various portions of the domestic functions such as dining, conversation and sleeping. Here the living room is given as much vista and garden as possible using floor-to-ceiling glass. The triangular scoring on the stained concrete floors, as well as the decorative copper fascia, exemplify using the materials of the outside to come inside, while those of the inside extend to the outside. The intention was to blur the distinction between where the house stops and where the garden begins." 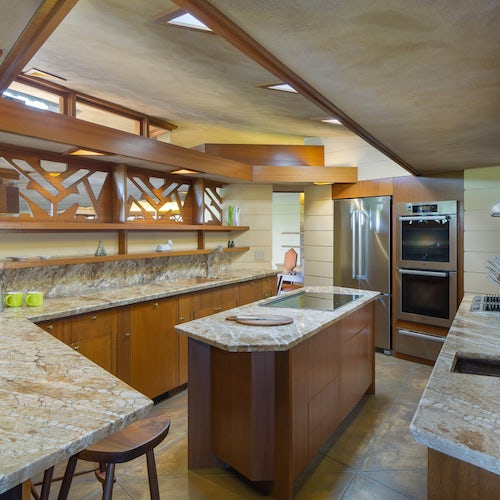 "Mr. Wright believed in featuring the kitchen not as a secluded workspace, but as part of the living room. The finishes should be '…just as charming to be in or look at as the living room, perhaps more so,' as Wright wrote in 'The Natural House' (pg. 166). Here, the 1960 appliances and plumbing fixtures have been updated; however, the original placement of sink, cooktop and refrigerator wisely and efficiently follow the concept of a work triangle. The triangular 'grammar' appears in the scored concrete floor, the wooden light screens, wall positions, recessed light boxes, and circulation around the central work island." 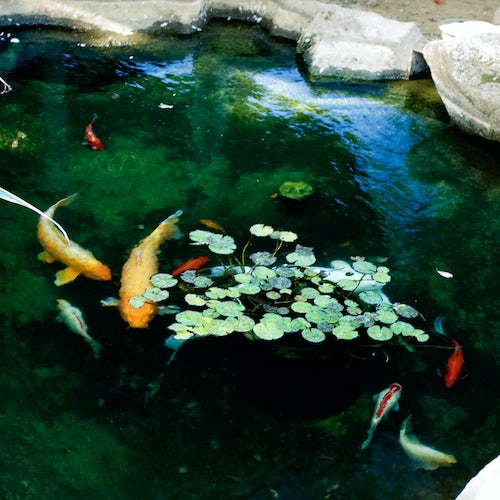 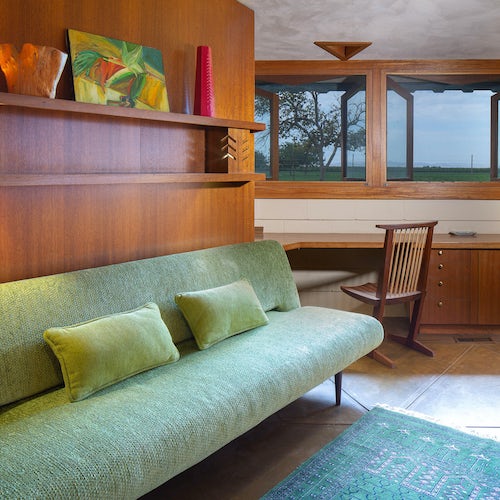 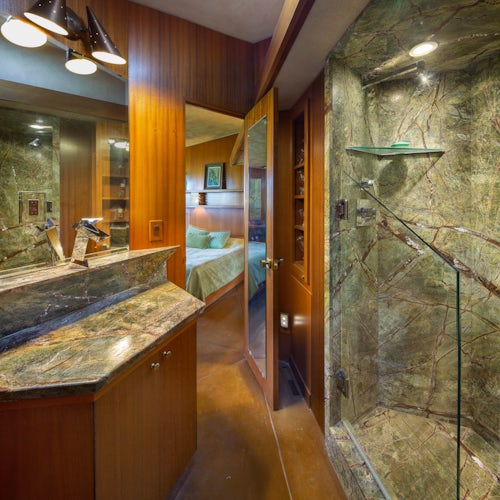 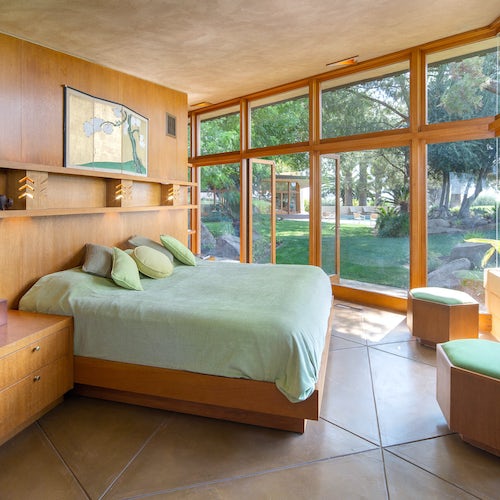 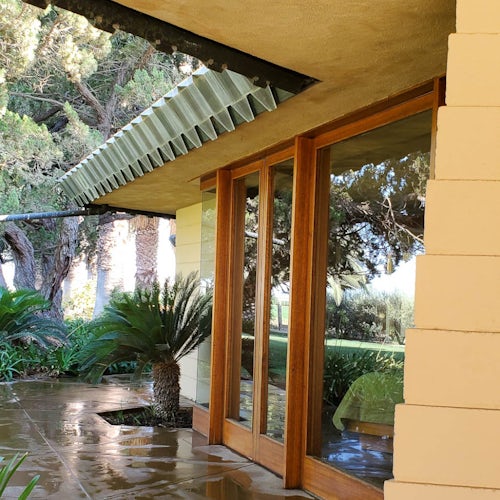 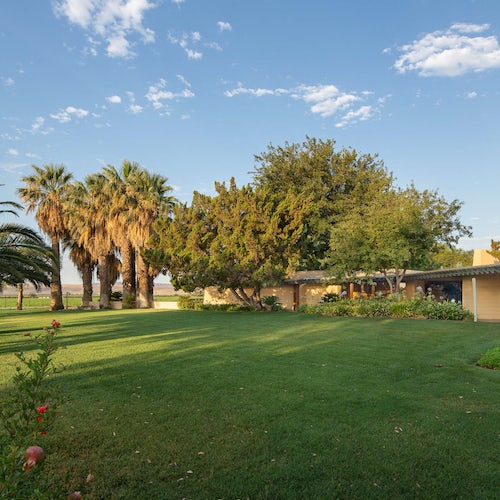 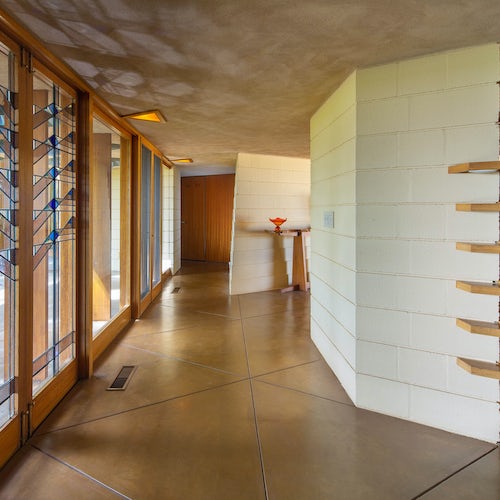 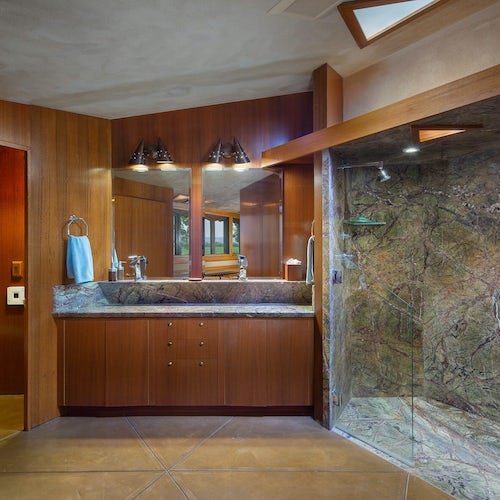 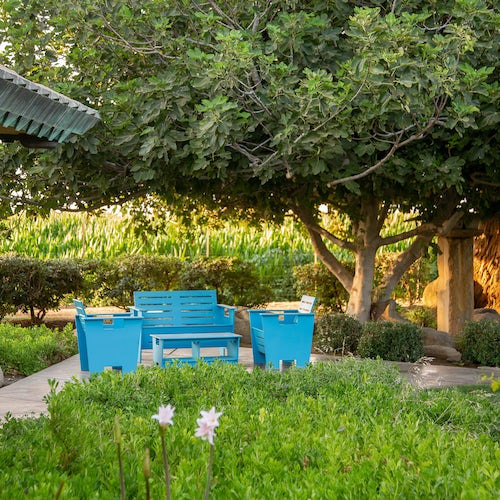 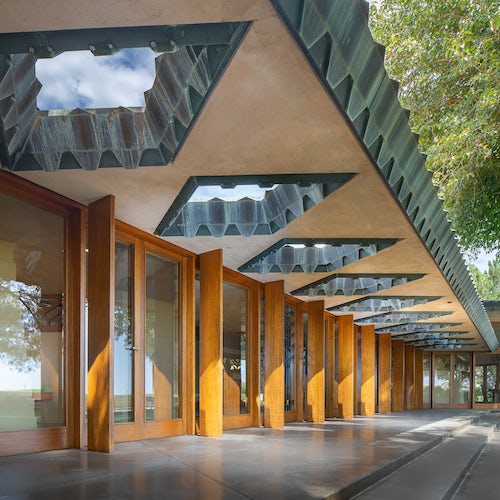 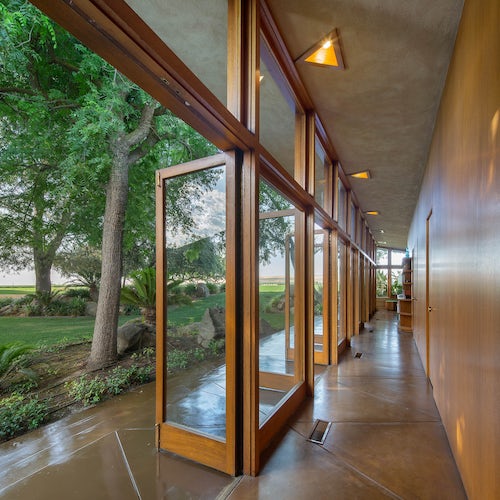 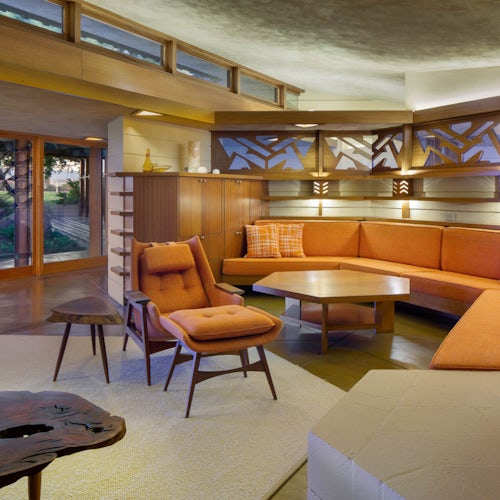 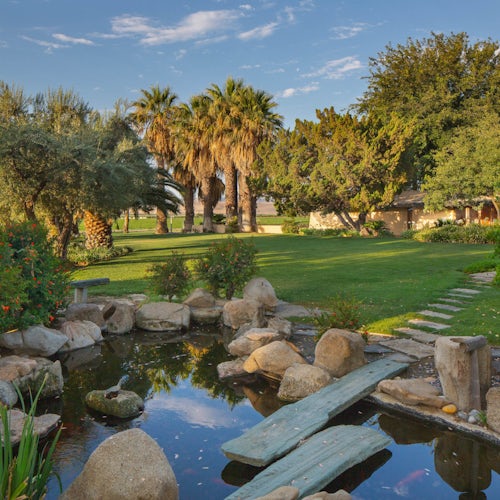