In the central dining space, a Louis XVI-style dining table is surrounded by chairs in a medley of classical shapes and set on an Oushak rug. A crystal chandelier from Dop Antiques in New Orleans hangs overhead, and a Thibaut wallpaper adds a subtle textural layer on one wall. Photos by Melissa Oivanki.

All the world’s a stage for Albert Nolan, who in more than 20 years as a performer with Theatre Baton Rouge has stolen the spotlight in roles ranging from King Arthur to Juan Perón. You even might have seen him earlier this summer playing cold-hearted publisher Joseph Pulitzer during the sold-out run of Newsies.

Away from the theater, Nolan’s day job as an interior designer and owner of Nolan-Kimble Interiors gives him the opportunity to create drama for a different kind of audience. Known for his willingness to embrace warm colors in a whitewashed world, Nolan finds likeminded souls in clients who refuse to give up their antique furnishings and cozy spaces in pursuit of a trend.

Nolan’s most personal recent design project gave a leading role to his own new home in The Preserve at Harveston. It all started when contractor Tyler Watson of Distinctive Homes by Watson asked Nolan to handle the interior design details for spec homes Watson was building in the development. “One day, he put a plan for a new house on my desk, and I really liked the layout,” says Nolan, who at the time lived in the Willow Ridge neighborhood off Jefferson Highway.

Eventually, Nolan decided that a modified version of Watson’s plan would be perfect for his own next act. Little touches served to make the house his own, like framing the pantry with antique doors from The Corbel in Zachary and adding kitchen cabinets that rise all the way to the 12-foot ceiling. He also made the side patio a more integrated—and more comfortable—part of the living space by surrounding it with screen walls and adding a fireplace.

Finding the right decorative elements to fill each space was where Nolan could really let his dramatic side shine through. He opted to use a warm gray color, Farrell-Calhoun’s “Soft Leather,” on the walls and trim of the open living, dining and kitchen space, and upon that backdrop he layered favorite pieces from his collections of antiques, rugs and art.

“I went through a white period in the early ’90s,” he says with a laugh. “But I prefer warmer tones, more earth tones.”

For spaces where a new piece of furniture was needed, Nolan still looked to the past. The central dining area demanded a table that could hold its own as a focal point, while a spot beside the living-room fireplace called for a sizeable cabinet to hide electronics. After a little digging, he managed to unearth classical specimens with just the right dimensions—a Louis XVI-style oval table from Rhode Island via the website liveauctioneers.com, and a 19th-century country French armoire from Crescent City Auction Gallery in New Orleans.

Nolan found another way to wow guests by incorporating wallpapers in strategic locations throughout the house. The formal foyer and the rear hallway wear grasscloth wallpapers, and the guest bathroom is adorned with an arabesque-patterned paper. One wall of the dining area is covered in a shimmering tone-on-tone damask-style Thibaut wallpaper. “I wanted it to be subtle, but just to visually push that wall back,” Nolan says. “At night, it’s really dramatic—the tones of the paper look like they’re reversed.”

Outside of the public spaces, Nolan let his love for color dictate a cozy atmosphere in the home’s three bedrooms. A guestroom calms with deep brown walls that balance against wall-to-wall seagrass underfoot, while another bedroom, designed as a study with an antique daybed and desk, features sage walls that complement Nolan’s collection of Audubon prints. The master bedroom’s walls are painted in a dark tan hue, made all the more impactful by the presence of a curtained canopy that hangs down from crown molding all around the bed. An antique Italian screen on one wall and a Karastan cheetah-patterned carpet below complete the scene—one that can’t be confined to any particular time period but manages to feel of the moment.

“You can have contemporary surroundings without going completely trendy,” Nolan says. “You have to be careful to keep in mind the style of the house and to find that happy medium of transitional—not too modern but not too traditional. It’s not necessary to be so literal about a style.”

Nolan has enjoyed welcoming friends to his new home, which is well suited for entertaining with its easy-flowing layout from indoors to the patio. In fact, one of his largest recent parties drew patrons and performers from Theatre Baton Rouge for a fun-filled fundraiser.

One of his favorite aspects of the development itself is its focus on cultivating an old-fashioned sense of community among residents. From “Wine Wednesdays” spent sipping with neighbors to stopping to chat with friends while running around the lake, he appreciates the many opportunities to interact with those around him.

“I have loved it out here, and I’ve watched it grow,” Nolan says. “I feel like I’m on vacation. It’s very serene.” 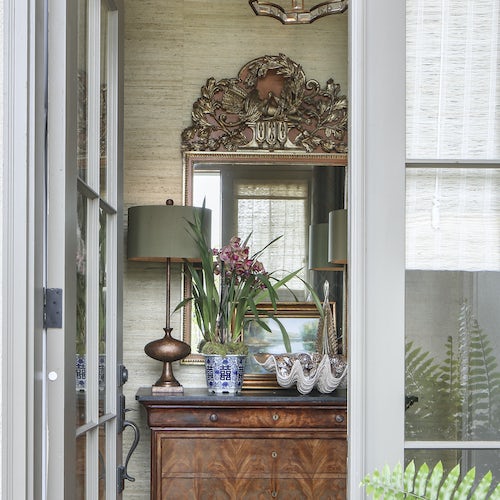 A 19th-century French bookmatched walnut chest is the focal point in the foyer, which features walls dressed in a Phillip Jeffries grasscloth. 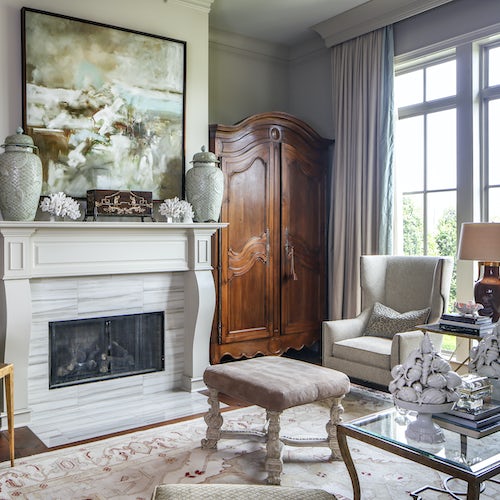 Sleek polished travertine on the fireplace provides a cool counterpoint to the warmth exuded by dirty-top oak floors and a 19th-century French armoire. The painting over the mantel is by Michigan artist Jackie Ellens. 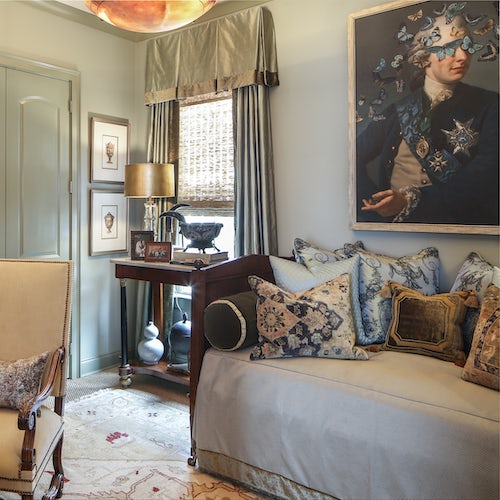 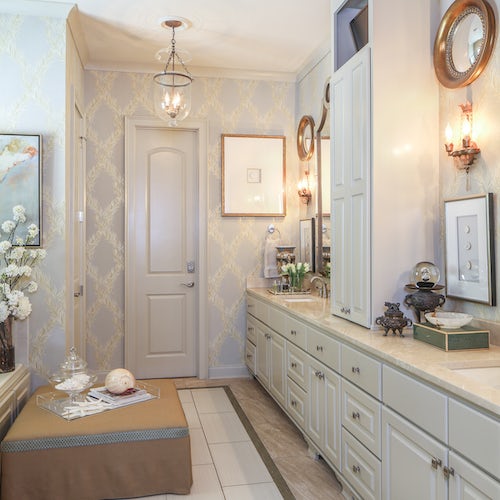 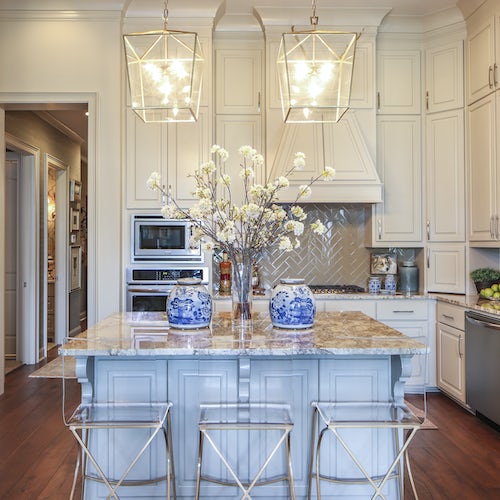 Nolan gave the kitchen an extra punch of storage power by extending the cabinets all the way to the crown molding. Lucite and gold-finished stools offer a contemporary touch without interrupting the line of sight from the dining area. Countertops are Sienna Bordeaux granite. 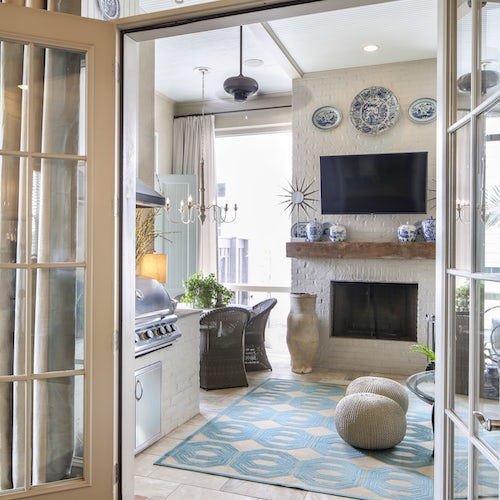 The side-facing screened patio is cozy any time of year, thanks to ceiling fans and a fireplace. “It’s great during the winter,” Nolan says. “I love being able to sit out here and watch a movie.” 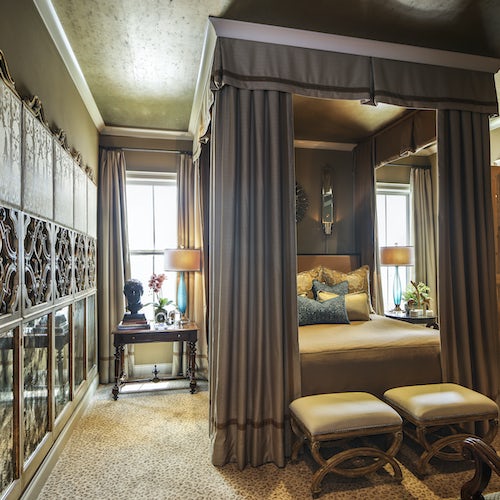 The master bedroom radiates high drama, with fanciful features including a 19th-century Italian screen on one wall, a ceiling-mounted canopy surrounding the bed, and a Phillip Jeffries washed-gold-leaf wallpaper overhead. The walls are painted in Sherwin Williams’ “Dapper Tan.” 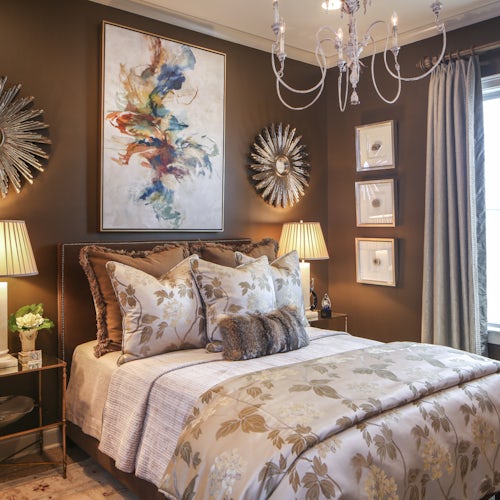 "I love, love, love a dark bedroom,” says Nolan, who chose Sherwin Williams’ “Saddle Brown” for the walls of this guestroom. “It’s comforting.” This space is a study in symmetry, with starburst mirrors and antique alabaster lamps flanking the bed. 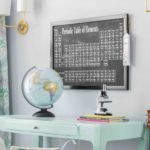 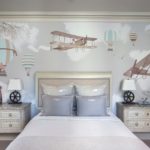 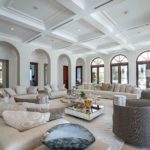 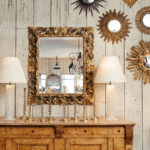