The plaster project DIY Susan Weisbrod took on to reimagine her mantel proved to be one of her biggest. She shared every bump in the road with her followers. Photo by Melissa Oivanki

“I realized a few years ago that I create better in the mess,” architect and budding Instagram DIYer Susan Weisbrod posted alongside a picture of her hands covered in grout as she worked on subway tile in her kitchen in October of last year. “When everything is a mess, I am less focused on perfection and willing to accept organic beauty.”

As her slow but steady renovation of her and her husband’s 1940s fixer-upper in the Old Goodwood neighborhood has come together, she has taken her @cypriere.diy followers along for the ride, hoping to help them understand and adopt this love for the work in progress. For Weisbrod, while of course it’s about the finished product, it’s also about the process that brings her there. It’s not just about the work to be done. Every project—big and small—is an opportunity to learn and to teach.

Since she started documenting her life online in August of 2019, she has gained more than 2,000 followers. They look to her not for picture-perfect, made-for-television transformations like those of Chip and Joanna, but rather for the reality behind each transformation.

“Could a professional do this more efficiently? Absolutely,” Weisbrod wrote on Instagram amid the challenging plaster project that revamped her living room mantel. “Am I proud of what I accomplished this week? Absolutely!”

But Weisbrod herself is no amateur, at least not in the traditional sense. She is a licensed architect with years of experience at Ritter Maher Architects. And while her career has always allowed her hands-on access to construction projects and renovations, it was when she decided to go out on her own during COVID-19 that she was really able to get her hands dirty. Her new Cypriére Studio is a merging of her two loves: architecture and DIY. The business, which she launched in March 2021, offers full architectural design services but also custom fabrication done by Weisbrod herself in addition to step-by-step guides to the DIY projects seen on her Instagram account.

“When we came home for the pandemic, it gave me the confidence to make that step,” Weisbrod says. “Going back to the office wasn’t easy, and I was motivated to make that jump faster. And I can say honestly that I’m glad I did.”

Now, the kitchen table that she constructed alongside her father, who has a matching one in his home, acts as a home base for her new venture, its glass tabletop holding the plans that come to fruition through Weisbrod’s own hands.

“This is where I spend most days,” she says, gesturing toward the wood-base table. “It’s funny because I have two older brothers but I’m the one doing projects at their houses. My dad taught me a good bit of woodworking as a kid, and now I’m the one teaching him.”

As for her husband Travis, he’s not much into DIY either. “He does the dishes while I do the handiwork,” Weisbrod says with a laugh.

Challenging gender roles has always come naturally to Weisbrod, though. Her pursuit of a career in the male-dominated architecture field was something she aspired to from childhood, melding the passions she gained from her parents: her father loves math and her mother is an artist. It is that career that has led her to yet another male-dominated space: do-it-yourself home projects and fabrication.

“After years of working at job sites, I’ve figured out how to have that confidence to ask questions and get insight,” she explains. “My focus in sharing what I’ve learned, and am learning, with others on Instagram is to help them find their own confidence. It’s a movement of empowerment with females and I’m happy to be a part of it. It’s not about being competitive, it’s about helping everyone grow.”

“It’s so great to see more women like Susan,” Weisbrod’s sister-in-law Kelly Lulich says of the community she has discovered online since following Cypriére Studio on Instagram. “It’s all about breaking down stereotypes and getting creative.”

Weisbrod is currently working with Lulich to reimagine several spaces throughout Lulich’s home. Weisbrod has already built her sister-in-law a custom closet but is looking to other places like her small pantry to come up with innovative solutions—like knocking down a wall and merging the laundry and pantry—to maximize space and usability.

“I think the difference with Susan is that she really takes the time,” Lulich says. “She wants to make sure everything caters exactly to what we need. The storage she is helping us create will make living a lot easier for us.”

That is the same goal that Weisbrod has in her own home, though she is the first to admit that the space isn’t her family’s forever home. The three-year plan has Weisbrod touching nearly every nook and cranny before its new owners are found. The first phase is nearly complete, as the living area and kitchen have been transformed from their dingy, outdated previous life thanks to the removal of walls and the addition of features like the statement hood and a coat of bold green paint, Sherwin Williams’ “Salamander,” that covers kitchen cabinets and living room built-ins. Weisbrod also increased the square footage of the living room with an addition that also overhauled the curb appeal of the house by giving it some depth and adding a welcoming front porch.

“The day we closed on the house, we were already here busting down Sheetrock,” she recalls. “The area and the price were really how we knew the house was the one, even though it didn’t look it at the time. I actually thought five times about it because of the low ceiling height. I knew that was something I couldn’t change.”

She found a fix, however, in the selection of the ideal interior paint color, Sherwin Williams’ “Origami,” and fixes like slimming up the mantel in order to draw the eye upward, both of which give the illusion of taller ceilings. It’s her keen architectural eye that gives her this edge. And perhaps that’s what pulls her followers in. But it’s her position as an unpretentious expert that keeps her followers around. On paper, Weisbrod knows exactly what she’s doing. But in the context of real life, she’s learning just like each one of her followers.

“What I want to emphasize is that you won’t get to this phase in one week,” Weisbrod says. “People should start small. Get a drill and miter saw and see what you can make with those. It’s always a work in progress.” 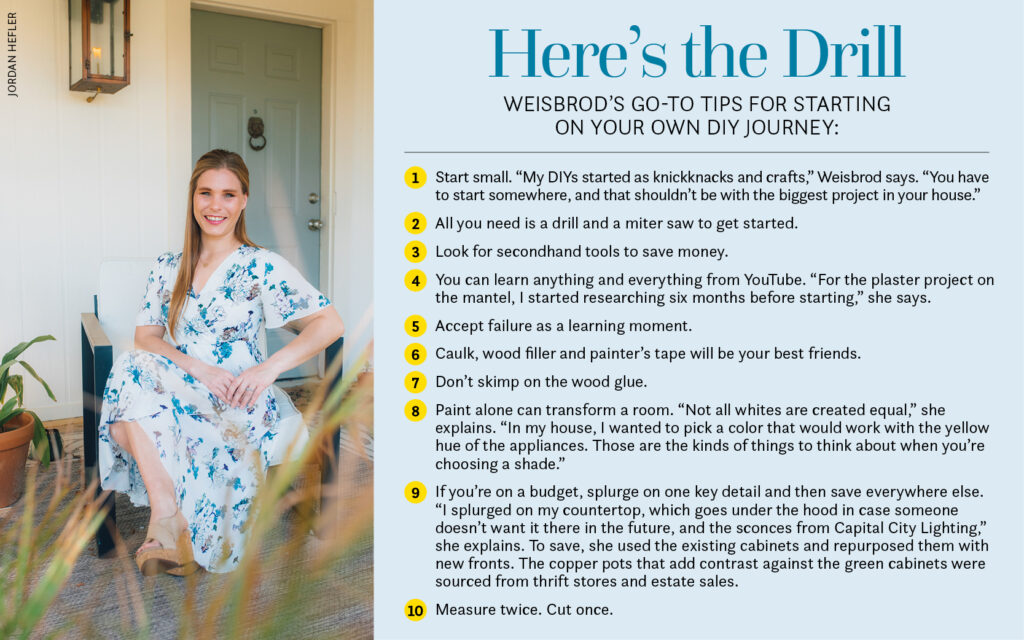 See more photos from Susan’s home in our gallery below: 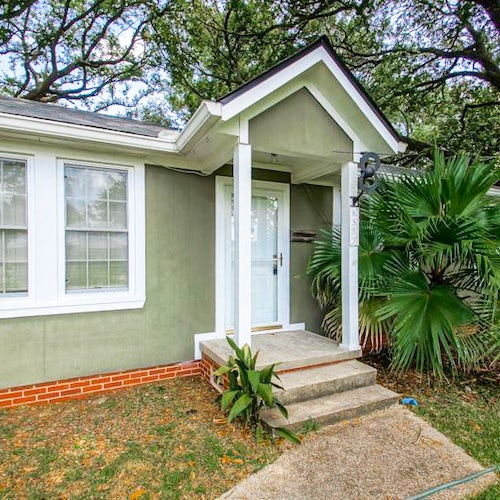 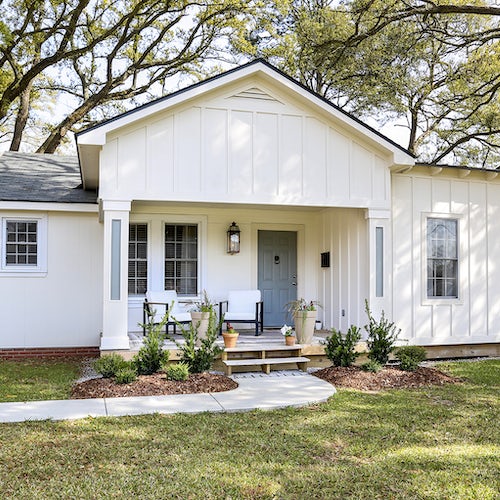 Originally, the 1940s home had a flat and unassuming appearance from the street. Weisbrod designed an addition that gives the living room some added space while completely changing the home’s exterior, allowing for a front porch to greet guests. A blue door is the icing on the cake. Photo by Melissa Oivanki 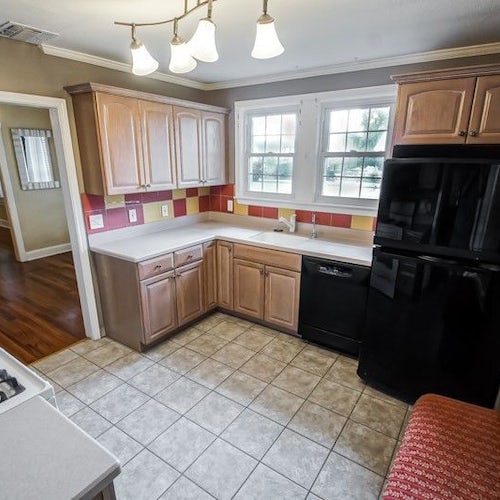 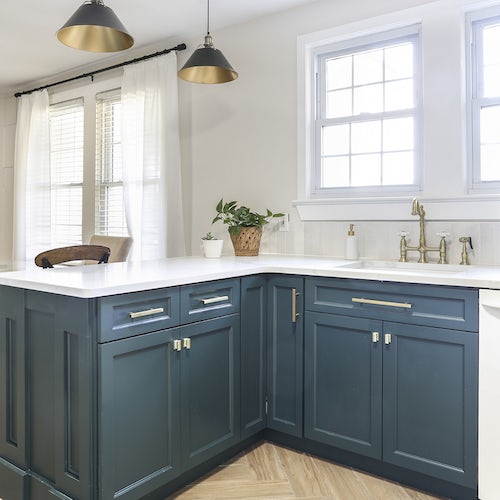 The day Weisbrod and her husband closed on the house, they were there knocking down the wall that separated the kitchen and living room spaces. They didn’t eliminate any storage or counterspace, though, keeping the lower cabinets where the wall originally was. Photo by Melissa Oivanki 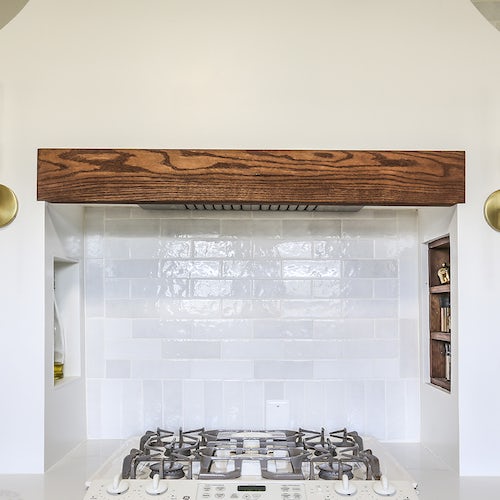 While it looks like plaster, the hood was constructed out of drywall instead. “After doing the mantel, I knew I needed to go a different direction for this project,” Weisbrod says. The hood took her three months to finish but she says it is one of her favorite features. Photo by Melissa Oivanki 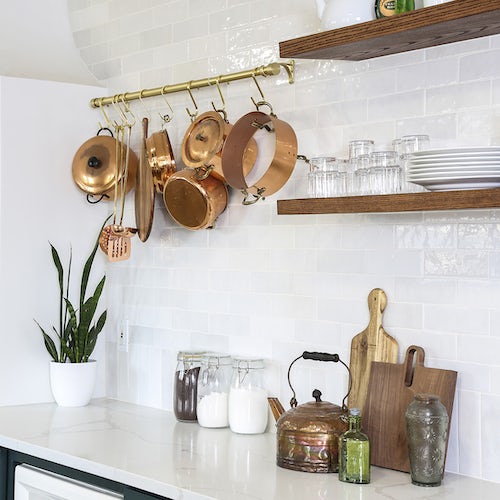 Copper pots and other on-display kitchenware were sourced from places like thrift stores and estate sales. “You don’t have to spend a ton to get the look you want,” Weisbrod notes. 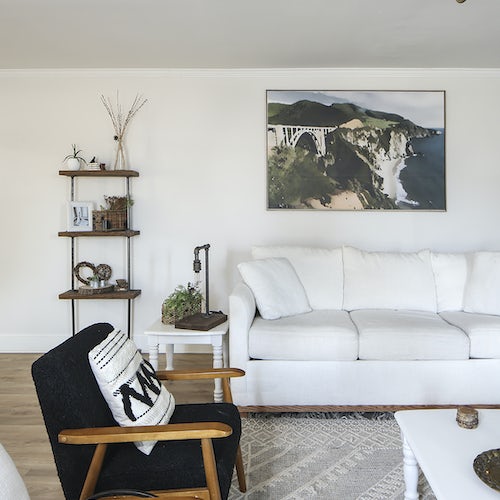 Thrift and vintage finds are mixed in with new purchases from places like Article that Weisbrod says are great quality for a more affordable cost. Photo by Melissa Oivanki 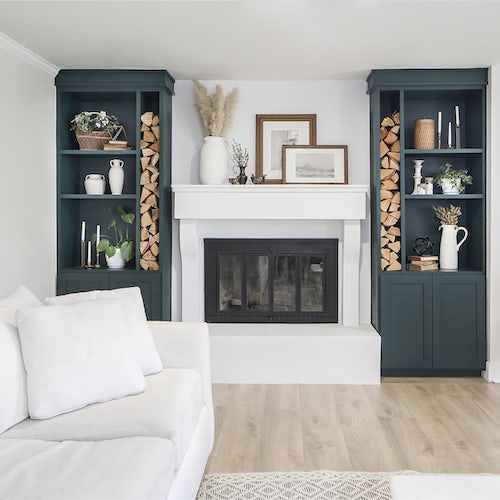 While her home was built using drywall instead of plaster, Weisbrod wanted to add a historical element by plastering the mantel to give it a new façade. She says she appreciates the experience but doesn’t suggest the DIY to just anyone. “Let me be honest with you. Plastering is not a DIY skill, and I found that out the hard way,” Weisbrod wrote on Instagram during the project. “I am mentally exhausted from this, and my arms feel like Jell-O. But I know I can do it and make it look beautiful all the same.” Photo by Melissa Oivanki