Deep roots: The Kirkpatrick family makes an heirloom home their own

Old oak trees shade the front yard of the Kirkpatricks’ home, which was designed by A. Hays Town in 1949. With help from architect Russell Washer and builder Gary Spurlock, the couple added the wing at right that includes a large master suite with views of University Lake. Photos by Sara Essex Bradley.

When the Kirkpatrick family was featured in a September 1999 inRegister article about their commitment to community service, the photographer knew just how to capture the cover image of Edith Kirkpatrick and her son Kris: with coffee mugs in hand, perched on the front porch of Edith’s house overlooking University Lake. After all, as the article noted, Kris often met his mother in that very spot for morning coffee on his way to work.

Twenty years later, Kris and his wife Jane are the ones who mark their mornings in the rocking chairs on this porch, having made the house their own after Edith passed away in 2014. And though the design details inside have been updated, this family abode remains steeped in the same south Louisiana charm it has always possessed.

This house’s history actually began several decades before the Kirkpatricks came to call it home. Designed by A. Hays Town in 1949—when the architect was still mostly known as a modernist—the home was one of the earliest iterations of the traditional Louisiana residential style that would later become synonymous with the Town name. Two other families lived here before Edith and her husband Claude purchased the home in 1981. “Mother and Daddy had always liked this house,” says Kris. “They would walk by it often, and when they found out it was available, they were excited.”

For the next 33 years, this lakeside home became the hub of Kirkpatrick family gatherings. Kris and his siblings, along with their spouses and children, were regular guests for Sunday dinners after church, and they all spent as much time as they could here with the family patriarch, who died in 1997, and then with Edith, who remained vibrant into her mid-90s. It was a house filled with music and merriment, as Edith had been a music teacher and choir director for many years.

Happy memories made the decision to purchase this home an easy one for Kris and Jane, who moved into the house in November 2015. In collaborating with architect Russell Washer and contractor Gary Spurlock on a renovation that would create a better flow among the interior spaces—“it was a traditional, kind of chopped-up layout,” Kris explains—they made sure to retain as many of Town’s classical details as possible.

“We visited here for 33 years with Kris’s parents, so we had our vision of what it should look like,” Jane says. “We wanted to open it up considerably. But some of that history colors the way we look at it, so we don’t mind seeing bits and pieces of the way it used to be.”

Another major element of the renovation was the addition of a new wing with a master suite facing the lake. It takes a careful eye to discern where the old ends and the new begins—and that’s just what the couple had envisioned.

“Russell and Gary both worked really closely not to change the Hays Town look with the addition,” says Kris. “We’re very pleased with the structural integrity.”

The couple also drew from their family history in decorating the home. It was a given that interior designer Jo Emmert, a longtime friend who had worked with them on several previous home design projects, would be the one to help guide this effort as well. “We’ve been together a long time,” Jane says.

Their enduring rapport meant Jo knew just how to combine family heirloom pieces with more updated décor elements, all while keeping an eye on the couple’s restrained style preferences. “Jane has always been my beige person,” Jo says. “For this house, we tried to do things that would fit into a traditional style but were still up to date.”

Throughout the house, mementos of the elder Kirkpatricks were woven into the design. A dresser that belonged to Edith now stands in the family room; hanging above the fireplace in this space is an English print, “The Melton Breakfast,” that is a nod to Edith’s mother’s maiden name. In the dining room is a painting that Edith bought at New Orleans’ Jackson Square, and in the master bedroom, a needlepoint depiction of a hymn is a nod to Edith’s musical career.

Outdoors, the Kirkpatricks turned to landscape architect Wanda Huh to refresh the yard in a way that would complement the four old oak trees in the front and an even larger one in the rear. The design also honors the placement of a gazebo that Claude and Edith constructed in the front yard in the 1980s to resemble a gazebo on Edith’s family’s ancestral home in Claiborne Parish. “Wanda designed curved beds like Steele Burden would have done,” Jane says. “We also had an arborist in to cut the trees in such a way that it opened up the view of the house from the road and opened up the lake views for us.”

The couple made sure that, even amidst all the renovation efforts, a single special citrus tree near the spot of the new addition was retained. “Mother planted that tree, and she would give out oranges to the grandchildren every Christmas,” Kris says. “We try to do the same thing now.”

Tending and maintaining the plantings outside is a task Jane is happy to tackle. “I enjoy it, I think mainly to see the result,” she says. “It’s amazing what you can do in an hour’s time, once or twice a week.”

Now in the hands of a second generation of Kirkpatricks, this home is still a hotspot for get-togethers with family members, including five grandchildren, and friends. From birthday celebrations to supper clubs to parties with the LSU gymnastics team, the newly open layout is well suited to supporting crowds of any size.

But on the quieter days, you’re more likely to find Jane and Kris on their front porch perch, watching the egrets swoop down to the lake’s surface or witnessing the white pelicans floating by during their fall migration. Out in the distance, they spy the lights of Tiger Stadium after the sun goes down. 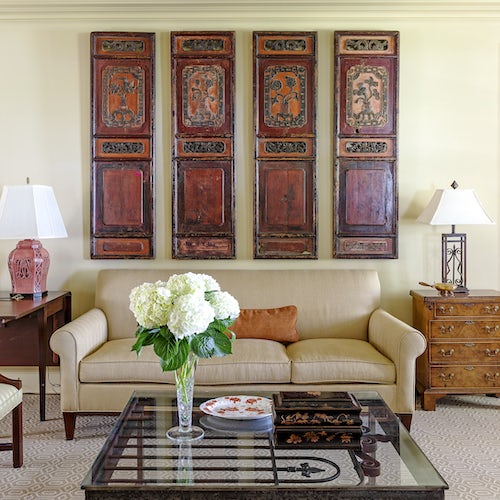 A quartet of Indonesian hand-carved wood panels steals the scene in the formal living room. 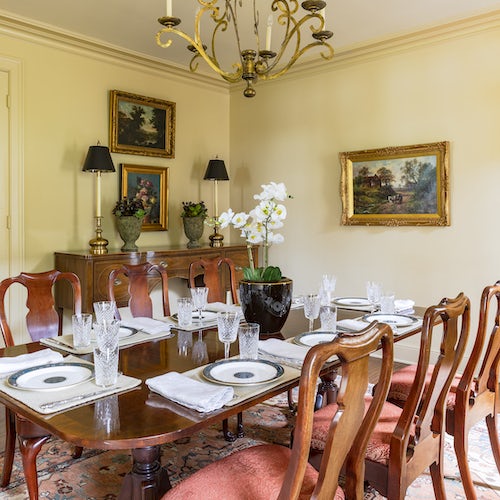 Paintings that once belonged to Edith are displayed in a corner grouping in the dining room. The new chandelier is an updated take on classic French style. 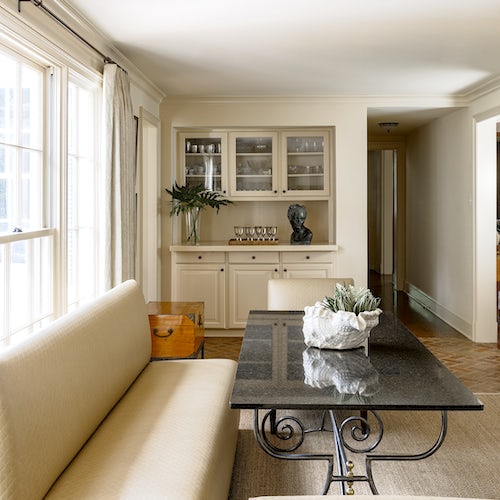 Enlarged windows over the keeping area just off the kitchen fill the cooking area with sunlight and afford views of the lake while prepping meals. Jo covered a custom banquette and chairs with a durable fabric and finished this casual dining spot with a custom granite and iron table. 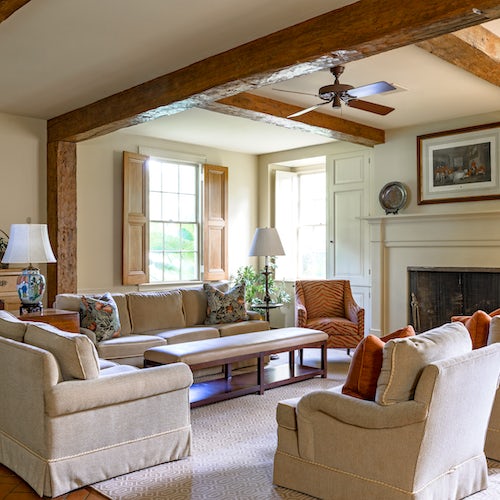 The classic beige sofas and club chairs in the family room are the same ones Jo first installed in the Kirkpatricks’ previous home decades ago. New deep orange zebra-print chairs flank the fireplace, and a leather-upholstered bench takes the place of a coffee table. 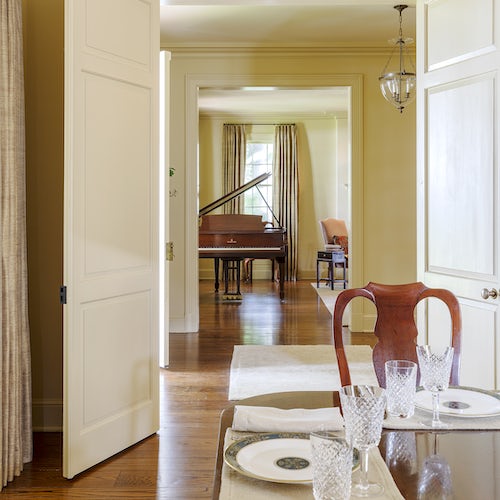 Across from the dining room is the living room, which the family often calls the “music room” because of the grand piano there. “When the kids get together, they like to get other instruments out of the closet and all play together,” Jane says. 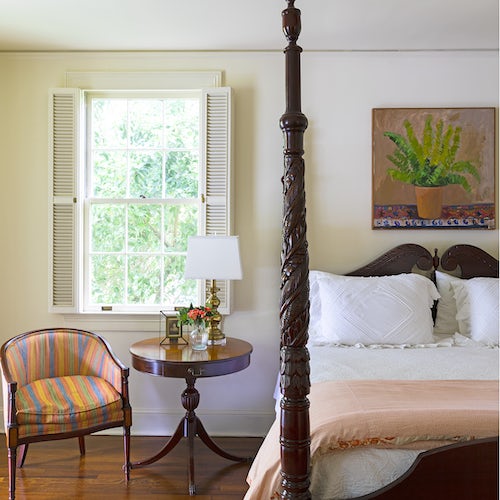 The classic carved bed in this upstairs guest bedroom belonged to Kris’s parents; his father’s highboy is also in this room. 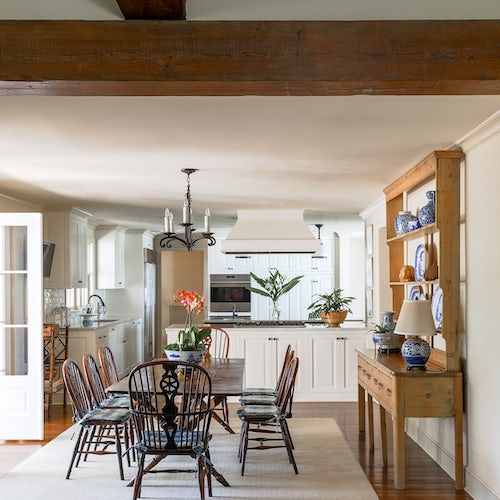 The breakfast area, home to an oak refectory table the Kirkpatricks got from Jo long ago, bridges the gap between the family room and kitchen. The expanded cooking space beyond is what Jane calls her “happy kitchen.” 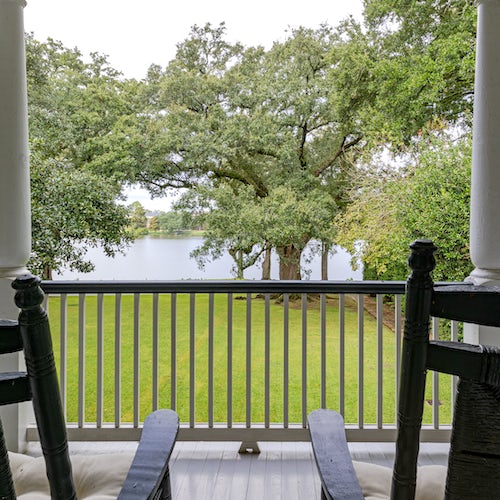 Extensive repairs to the balcony were an unexpected project undertaken late in the renovation process. The spruced-up space maintains the classic Louisiana charm of the original and affords sweeping views of the lake. 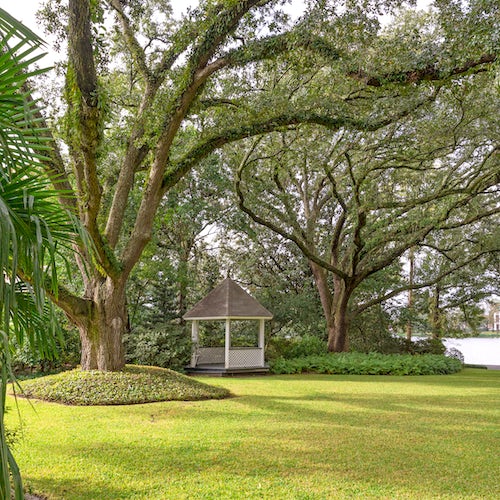 To complement this Hays Town-designed home, landscape architect Wanda Huh drew inspiration from another Baton Rouge icon, Steele Burden, to create a garden plan that embraces the old oak trees already in place. Claude and Edith Kirkpatrick built the gazebo in the mid-1980s. 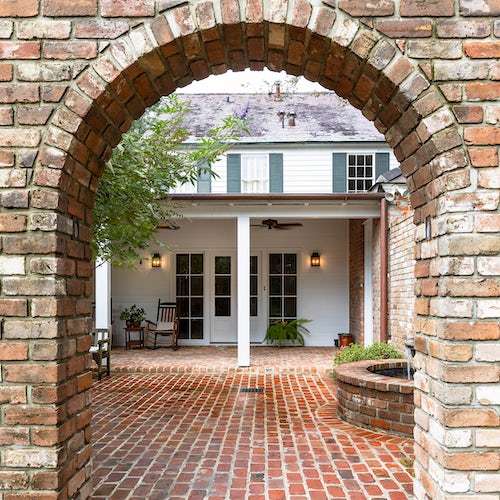 Wanda Huh’s rear courtyard design includes an arched entry and a wall fountain made from an old French mold. 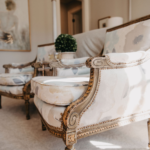 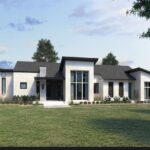 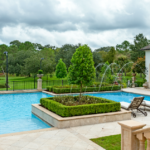 Peek into some of our favorite outdoor spaces 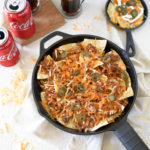