Windowpane check-patterned upholstery on the sofa conveys a preppy statement in the living room. The classic feel is carried throughout with tailored furniture sporting signature details like dark stained wood and hammered nail embellishment. Photos by Jessie Preza

When south Louisianians talk about the “coast,” they’re likely referencing the area that borders the Gulf of Mexico. The beach towns that span the distance from Texas to Florida are popular vacation destinations with minimal driving time, sandy beaches and maximum sunshine. But when interior designer Rachel Cannon’s out-of-town clients requested a coastal look for their newly purchased Baton Rouge home, they weren’t referencing the pastel-painted, stilted getaways that are commonly associated with the Florida coast. Instead, they were looking a little further north.

“The homeowners love Cape Cod and wanted that New England look brought into the space,” Cannon explains. “Travel helps people expand their design lexicons. Often, people bring me inspiration images from hotels they stayed at on vacation, and I think that’s great. You want your home to feel like a retreat where you can find that same relaxation you felt on a great trip.”

While Cannon aims to create this in all the spaces she designs, in this case the translation was more literal. The 1,400-square-foot new build in Rouzan acts as these clients’ second home, serving as a hub for their visits down from Minnesota to see family in the Capital City and a space for them to unwind away from work and other day-to-day responsibilities.

“Since it is a second home, they didn’t need something huge,” explains Cannon. “But with it being a new construction, they didn’t want to change any of the existing paint or finishes. We had to get creative to bring that preppy, coastal look they were going for.”

For Cannon, that required a statement piece here and there, but, more importantly, a classic color palette, which she found in shades of blue and white. The deep navies of ginger jars interact with soft blue-hued armchairs in the living space. In each of the bedrooms, a different combination of ocean-inspired hues covers the beds—a top request of the homeowners was the exclusion of white bedding—as well as the larger furniture pieces. And a light blue secretary sits at the top of the stairs, beckoning the homeowners and guests alike to abandon their conviction to work-life balance.

“The secretary is one of my favorite pieces, and it was actually the answer to the need of the homeowner to have a space that could function as a home office,” Cannon says. “It’s especially nice that it can be closed up when it’s not in use.”

Space-saving and clutter-eliminating solutions like this were essential in the design of this home given its small size, with the open-concept living, dining and kitchen space requiring a little extra attention from Cannon. More obvious choices like the scale of the furniture and the nearly invisible acrylic coffee table are just the tip of the iceberg. To clearly define each space, Cannon fitted the areas with distinct statement pieces that defy the idea that a small room requires only small details.

An oversized pendant light above the dining table sets off the eating area. “It completely changed the space,” Cannon notes of the fixture, which she names as one of her favorite pieces in the entire home. On the other side of the room, a large, neutral living room rug reflects natural light to give the impression of greater spaciousness.

“You don’t want every single thing to be small or the space will look off,” explains Cannon. “Instead, a large rug can actually make a room feel bigger because it’s filling the whole area and drawing the eye with it.”

As for the kitchen side of the room, the masculine-leaning counter stone and tumbled marble backsplash informed many of the color choices both in the main living space as well as in the bedrooms. By carrying shades of tan and brown throughout the home, Cannon aimed to bring greater continuity and relevance to the features, which had to be accommodated since they were so present in the existing design. “You have to work with what you have,” says Cannon. “Drawing the colors out rather than ignoring them can be a huge help.”

It’s these tricks of the trade that give the finished product the pulled-together feeling that is the goal in not only Cape Cod coastal design, but in all interior design projects. Easily discerned but not so easily achieved, this result proves that there is no Pinterest board substitute for the prowess of an interior designer.

“It’s like Ford designing a car. You can’t just look at the parts and discern what exactly the finished product will do and be,” Cannon explains. “That’s why trust between you and your design firm is absolutely essential. We create a concept that is specially tailored to each individual space. You just have to trust the vision and watch it come together.” 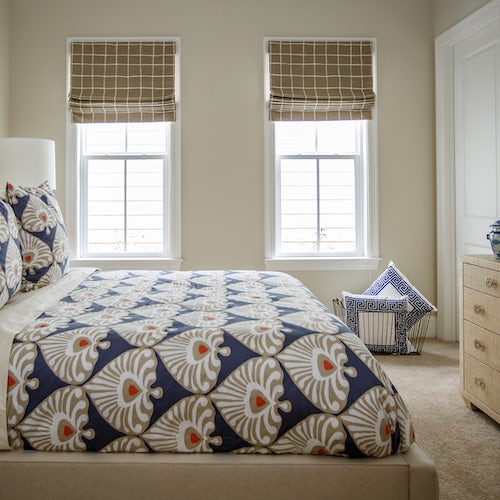 Since the homeowners wanted to forego traditional white bedding, Cannon let a Serena & Lily duvet and shams with touches of deep orange be the focal point in the master bedroom. A raffia-wrapped dresser topped with collected pieces hammers home the intersection of coastal and cozy. 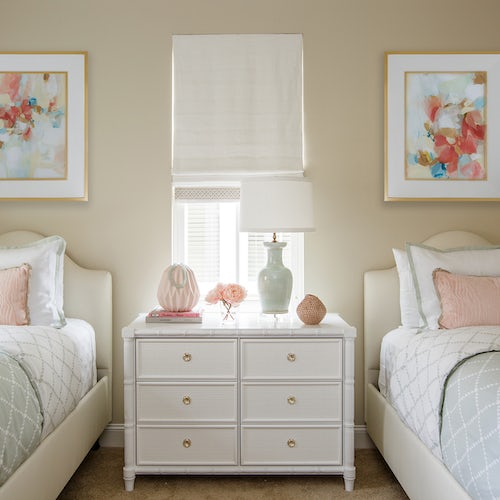 In this child’s room, a pair of twin beds provides ample space for family sleepovers while a white chest takes the place of typical nightstands in order to minimize clutter and house extra blankets and maybe a few games. 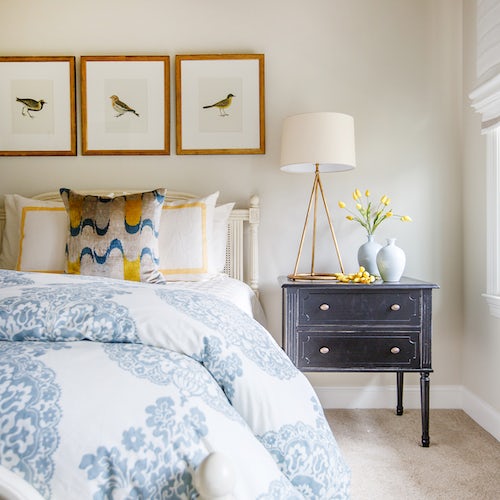 The home’s blue color palette is expanded upon in this guest room with the addition of a warm yellow, which Cannon says was inspired by trio of bird prints that hang above the white Louis XVI-style bed. Modern gold-tone lamps create eye-catching contrast atop distressed nightstands.

Move over, mops–a pro organizer advises on the best strategies for spring cleaning

How to organize for a worry-free move

Spring clean your mind with these healthy stress relievers

10 questions with local laundry concierge service Get It Washed