Collective soul: A mix of vintage and fresh finds strike a harmony in this home

The dining room is a reflection of this home’s balance of new, vintage and collected. A bench was recovered in Galbraith & Paul fabric. Two cane end chairs were sourced from a dealer in California. Overhead, a Julie Neill chandelier came with the house but was relocated to the new space. And over the mantel, a piece by Joseph Bradley was purchased from Gallery Orange in New Orleans, a favorite of the homeowners. Photos by Jacqueline Marque.

They say the kitchen is the heart of the home. But in this one, on more than an acre off of Bluebonnet Boulevard, food isn’t what fills the cups of its inhabitants. Rather, it’s music. At the center of its open living space, a turntable is accompanied by shelves bursting with records from legendary artists of the past and present. The Foo Fighters. Green Day. The Rolling Stones. Even Eminem. The catalogue isn’t limited to a genre. The only prerequisite is an album’s ability to inspire.

“The homeowners wanted their record collection to be in a central location so they would have easy access,” explains designer Sara Brignac of Workshop 31 Twelve, who worked with the family to personalize each space. “They love to collect things, music being one of them, but also art—local art especially.”

Just like their record collection, art of all types is displayed side by side, speaking to the depth of personality of the homeowners themselves. In the dining room, Lego creations and tiny treasures from family trips are displayed in a modern version of a curio cabinet next to a vibrant yellow painting by Joseph Bradley titled “Finches.” In the living room, stained glass picked up at vintage stores over the years gives unexpected contrast next to an abstract work by Lisa di Stefano. And while a balance is always found, Brignac notes that the walls, surfaces and even furniture never stay the same way for long.
“Every time I would come by, they would have new pieces to incorporate into the room,” she recalls. “But it was really fun to work with all of the different finds. I think it allows the spaces to be a true reflection of the clients themselves, and that’s always our goal.”

That pursuit led Brignac to switch the living and dining spaces from the way they were imaged by the original homeowners. What once was a cozy den space became an elevated dining room by washing the flagstone mantel in a shade of white and moving the home’s original Julie Neill crystal chandelier to the center of the space. The main living room off the kitchen was then transformed into a dual-purpose listening and television room, with a Stark rug in the brand’s iconic antelope print running throughout to create unity. The pièce de résistance, though, is a spacious teal sectional that Brignac says is as functional as it is beautiful.

“They wanted a comfortable and durable living space for everyone in the family to enjoy,” she explains. “We weren’t going to go with the generic white, and the homeowner loves teal. It worked out perfectly.”

Blue velvet wasn’t the last of Brignac’s bold design proposals either, the perfect example being the downstairs powder room. “The homeowners were unsure about the idea of wallpaper,” Brignac says, “but as soon as they saw a sample of the Windy O’Connor print, they were sold.”

Titled “Grassy Moth,” the abstract design packs an unexpected punch in the tucked-away washroom under the stairs. To set it off, Brignac opted for a dark green vanity, gold and acrylic Gabby mirror and special-order, ultra-modern sconces. “It was all about making that space a real jewel box,” explains Brignac.

The wow factor of this house isn’t only in the little details, though. It’s not even in the home itself but rather, outside the home’s many French doors and wide windows.

“I actually met the homeowners when they were in their previous house,” recalls Brignac. “I knew they wanted more property, and this house really is the perfect fit.”

Natural light is abundant at all times of the day and reflects off of the gleaming stain of antique pine floors. To bring even more of the outside in, Brignac employed the use of textiles, the most notable of which adorns the windows and French doors of the dining room.

“They’re a sheer Stroheim fabric with a metallic overlay,” Brignac says. “What I love about them is the watercolor pattern. It almost mimics what’s right outside the window. It’s serene.”

And despite all of the vibrant and out-of-the-box details that come together in this home, somehow, the overall impression is that of relaxation. Perhaps it’s because it so clearly communicates the passions of its inhabitants, but the teal velvet, patterned wallpaper and even the wall shelf packed with memorabilia in the dining room end up looking natural rather than shocking. In the hands of Brignac, even the most diverse of inspirations come together as a cohesive vision.

“I think my niche is working with what people have and the strong visions that they bring to their spaces,” Brignac says. “What’s most satisfying is having a client say that a room feels like them. That’s what we’re going for.”

See more of this home in the gallery below: 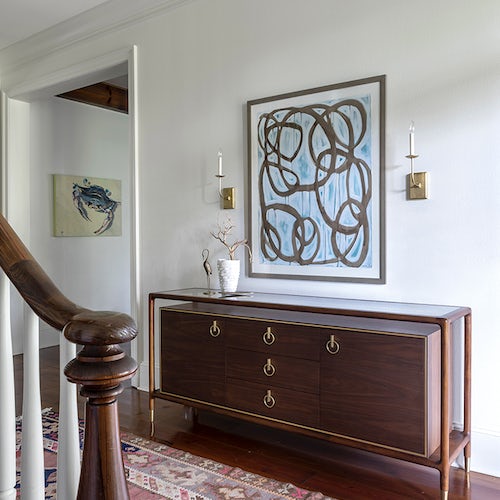 An abstract work by New Orleans artist Amanda Stone Talley is given a place of honor in the foyer. A Phillips Scott console provides a hiding place for incoming mail, keys and other bits and bobs. Underfoot is a handwoven vintage rug that captures the home’s vibrant color scheme. 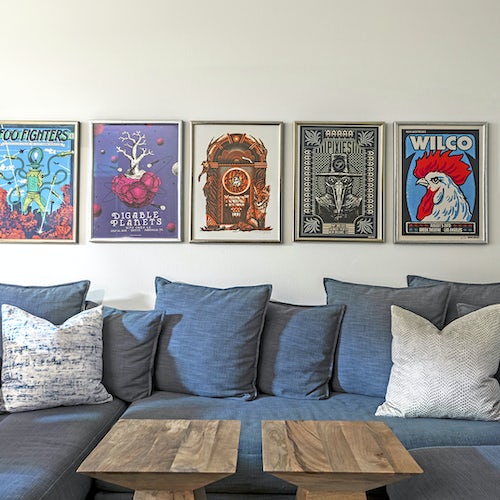 The living room is home to a pair of white Barcelona chairs that the homeowners have held on to for many years. As for the teal sectional, it was imperative that the entire family—teenagers and all—could come together to watch movies and listen to the music emanating from the turntable immediately adjacent. 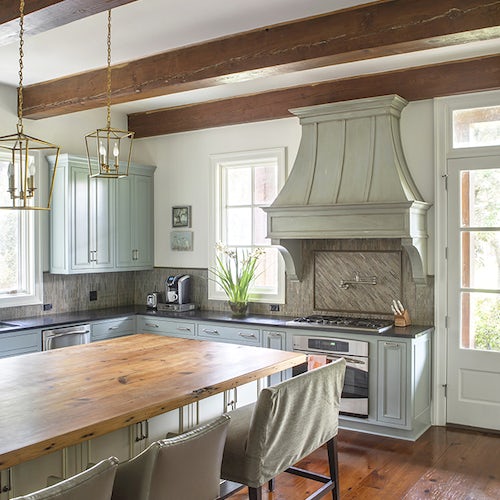 Blue cabinets and a wide pine island were selling points for the family in their original walkthrough. A trio of lanterns over the island gives a touch of New Orleans, a favorite destination of the homeowners. 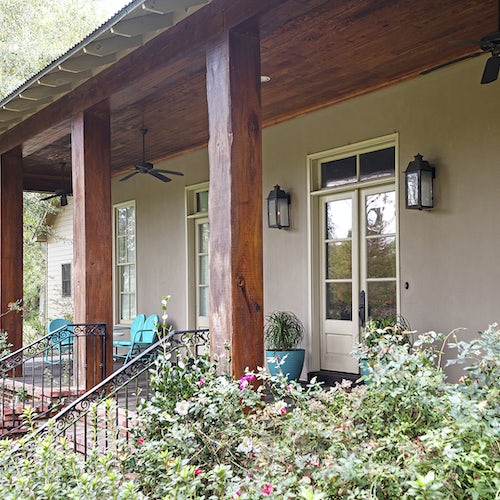 Porches on the front and back overlook the home’s vast property while cypress beams play into the overall landscape. 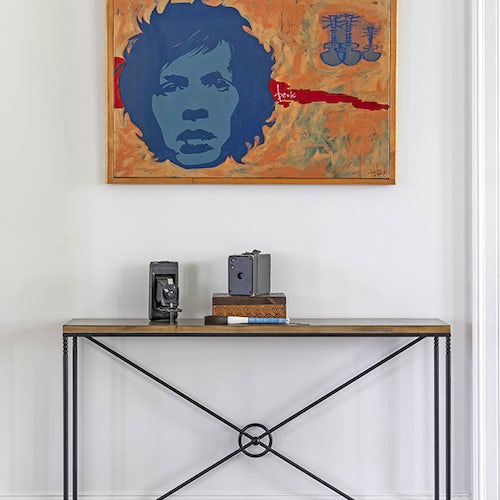 A painting of the singer Beck by local artist TJ Black is the focal point of this vignette that highlights the homeowners’ artistic and musical tastes.