Women with a Cause 2022: Whitney Breaux

Marketing professional Whitney Breaux was 32 when she noticed a hard mass in her left breast while play-fighting for the TV remote with her son. Doctors diagnosed her with stage 3 invasive ductal carcinoma breast cancer, and the news shook Breaux to her core. She had never, ever considered herself a candidate for breast cancer.

“I’m young,” says Breaux, now 34. “I’m in shape. I’m healthy. I’m traveling the world for work and for fun. There was nothing that would have alerted me to the idea that I had cancer growing inside me that doctors think was there for at least a year.”

Just as the COVID-19 pandemic started, Breaux underwent six rounds of chemotherapy to treat the cancer that had also spread to her lymph nodes. She then had a double mastectomy. She underwent radiation treatments that burned her skin and had multiple rounds of monoclonal antibody infusion therapy and then reconstructive surgery.

While recuperating, Breaux fought through her depression and got angry. She had been completely unaware she could even be at risk for breast cancer. How was this not on her radar? “I thought breast cancer was a white woman’s disease because in the Black and African American community, it’s not talked about,” Breaux says. “People hide it historically. And that made me very angry. I just don’t like it when something could have been avoided but we didn’t do what needed to be done to avoid it.”

Breaux began researching breast cancer perceptions and the way the disease is portrayed in the media. “You really don’t hear a lot about the importance of performing self breast exams every month, especially if you’re under 40 and you’re not getting mammograms like me,” she says. “Self breast exams might be the only way you will discover that you have an abnormality in your chest.”

Breaux created Day 18, an awareness campaign that encourages women—especially those under 40—to perform a self-breast exam on the 18th day of every month. She selected the number 18 because one in every eight women will be diagnosed with breast cancer in her lifetime. Breaux, an LSU graduate, also loves LSU football and wanted to represent the university’s prestigious number 18 jersey.

“I’m not very good at taking things like this lying down,” she says. “When I realized this was going to be a difficult road for me, Day 18 became my coping mechanism because it gave me an outlet to do something about what happened to me.” 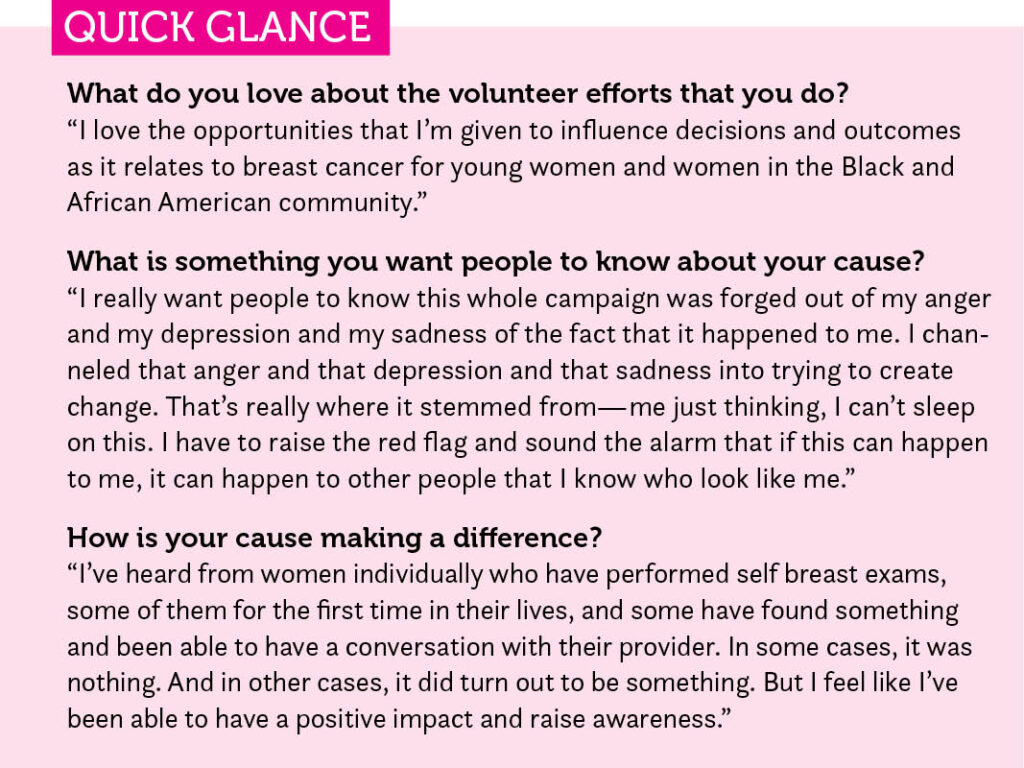