Women with a Cause 2022: Lori Bertman

‘Then Katrina hit,” Lori Bertman remembers. “That’s when it all started.”

It’s not unfamiliar here in south Louisiana to hear such a statement. Even after 16 years, the devastating storm and stories of the upended lives and livelihoods that it left in its wake are regularly recalled, speaking to the wide-reaching and long-term impacts of the disaster. But, as they say, out of darkness comes light. In the face of chaos immediately following the storm’s August 2005 landfall, Bertman saw an opportunity to make a difference—a big difference.

“I was already in the philanthropy field. I graduated in social work and I’ve always been passionate about building better communities,” explains Bertman, who is the current president and CEO of the Irene W. And C.B. Pennington Foundation. “But when the levee broke, I decided that I had to go.”

Bertman, along with dedicated partners like John Davies of the Baton Rouge Area Foundation, spent the next two years responding to Katrina and its impacts. In the midst of raising money and working to address the problems that proliferated throughout the state, she noticed the need for an organization dedicated to coordinating efforts to facilitate the most effective and purpose-driven giving possible.

“People give initially and quickly,” she notes. “But they forget about it when the news changes. People don’t realize that it takes communities years to recover from a disaster. I wanted to create something that would give people the tools to make smart investments for recovery.”

In 2010, Bertman cofounded the Center for Disaster Philanthropy with Eric Kessler and Regine Webster to provide such a resource on an international scale. Starting with a small board and a few employees, the nonprofit has grown over the last 11 years to 21 staff members and 10 board members, of which Bertman is now board chair emeritus after stepping down as board chair in 2020. The organization is dedicated to monitoring and responding to disasters all over the globe. Serving as advisors and consultants to funders, its team’s goal is to follow a disaster throughout its entire life cycle, offering the most beneficial aid and responding to vital nuances like inequity in communities. Since its inception, the group has granted some $80 million to 400 organizations worldwide.

“What I’ve realized throughout my years in this field is that the most important thing is working together,” Bertman says, noting that communication and coordination are at the heart of any successful disaster response. “It’s so critical but it’s often the hardest thing. I like to say that disaster response is a relay race because everyone has a part and every part is vital.”

The CDP doesn’t just respond, though. Part of the organization’s mission is also to anticipate, and Bertman says she knew a pandemic would make an appearance in her lifetime. That’s why, when COVID-19 struck, she and the CDP already had plans and strategies in place.

“We were well positioned at the start of the pandemic because we knew it was coming,” she explains. “No one knew who to go to because this was unlike anything people had seen or dealt with before. It put CDP on the map in a big way.”

The organization was recognized as one of CNN’s 2020 Heroes for its work in responding to COVID-19. But even as the group becomes more well known, adapting and evolving with the world’s disasters, Bertman says what she is most proud of is that it is something that finds its roots in Louisiana.

“It’s an incredible pride for Louisiana that we’ve done this,” says Bertman, noting that the international scale of CDP’s disaster response has been aided by local funds like that of the Penningtons. “I love helping to build and sustain communities. This is a passion that I have carried, and will carry, throughout my entire life.” 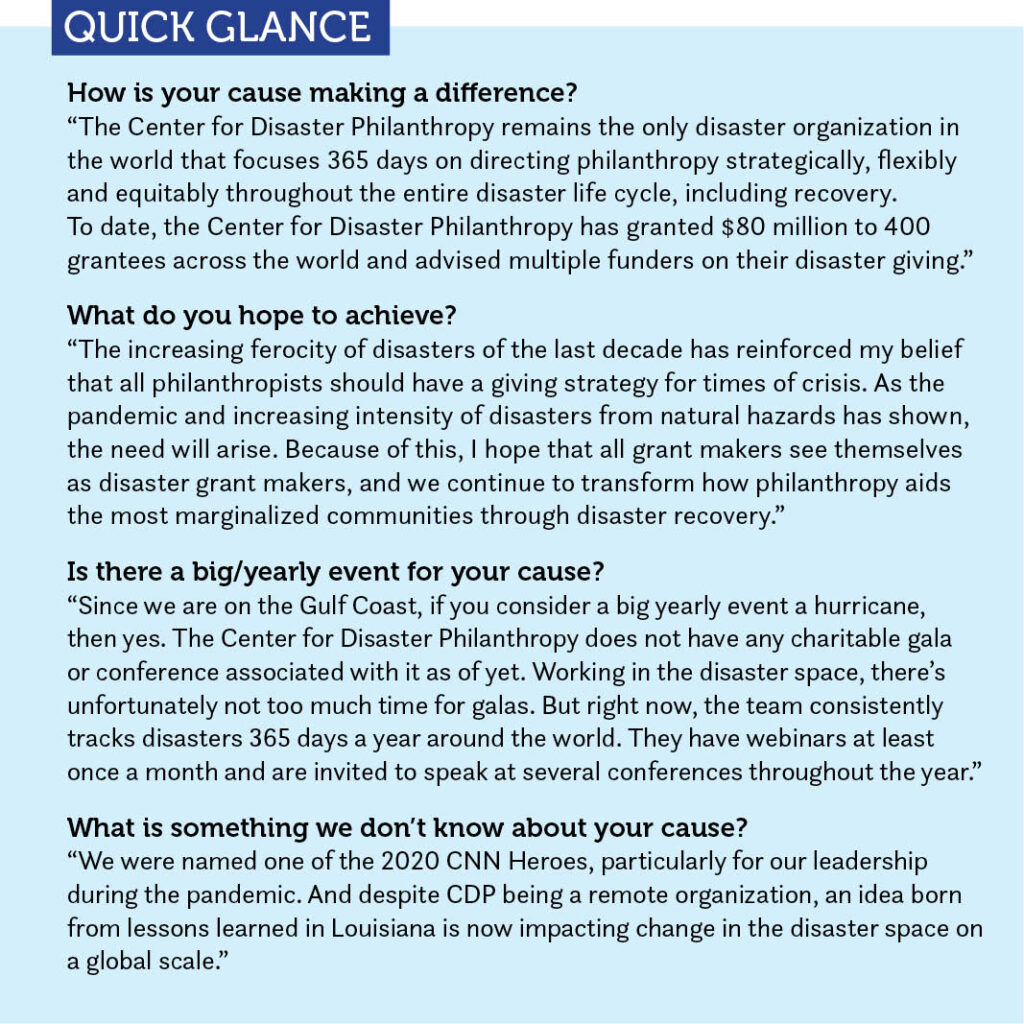 Click here to read about another of Lori Bertman’s passions—this one in an entirely different arena.