Women with a Cause 2022: Jennifer Richardson

When real estate agent Jennifer Richardson arrived early at the corner of Jefferson and Essen in the dark of that first morning, she had almost convinced herself that no one would come. Surely the drivers alongside the median would think she was crazy, she thought, pulling on her rubber gloves. After all, it was a cold day in January 2021, and she had only posted a small notice on Facebook and Nextdoor. Yet the littered bottles, cigarettes, food waste and other unspeakables spewed along the roadside were far more than she could hope to eliminate alone.

At the appointed time, though, a volunteer appeared. Then another. By the end of three hours, the 10-member band of “litter warriors” had picked up enough trash to fill 42 contractor bags. Keep Tiger Town Beautiful was born.

“I’ve lived in Baton Rouge my entire life,” says Richardson, “but over the past 10 years, I’ve looked around at the litter problem and wondered what has happened to our city. I was sick of listening to myself complain.”

Richardson’s original small group has since grown into an ever-evolving force, from strangers sticking their heads out car windows offering cleanup equipment to others donating entire trucks for trash transportation. The group—which Richardson originally referred to as the “loaves and the fishes” due to its constant replenishment in spite of never asking for money or donations—continues to meet at a different location every Saturday at 8 a.m., ready to tackle the trash taking over Baton Rouge’s busiest thoroughfares.

“These meetings began during COVID, when nobody was supposed to be near each other or talk to each other, and the media seemed to want everyone to hate everyone,” says Richardson, who often brings home-baked goods for volunteers to snack on after a morning’s work. “But the people who came out were from every affiliation in life. We came together as strangers and left as a community.”

Anyone with a pair of rubber boots is welcome to attend the cleanup efforts on Saturday mornings, and Richardson posts the results of each week’s haul each Monday on the Keep Tiger Town Beautiful public Facebook group. She has also reached out to the mayor’s office in hopes of eliciting more public service announcements and trash receptacles near bus stops and heavily trafficked areas of town.

“Baton Rouge is a beautiful city full of oak trees and Spanish moss and azaleas and dogwood,” says Richardson. “It just breaks my heart to see people throwing trash at it. Our earth is dying, and we need to change the culture to help heal it.” 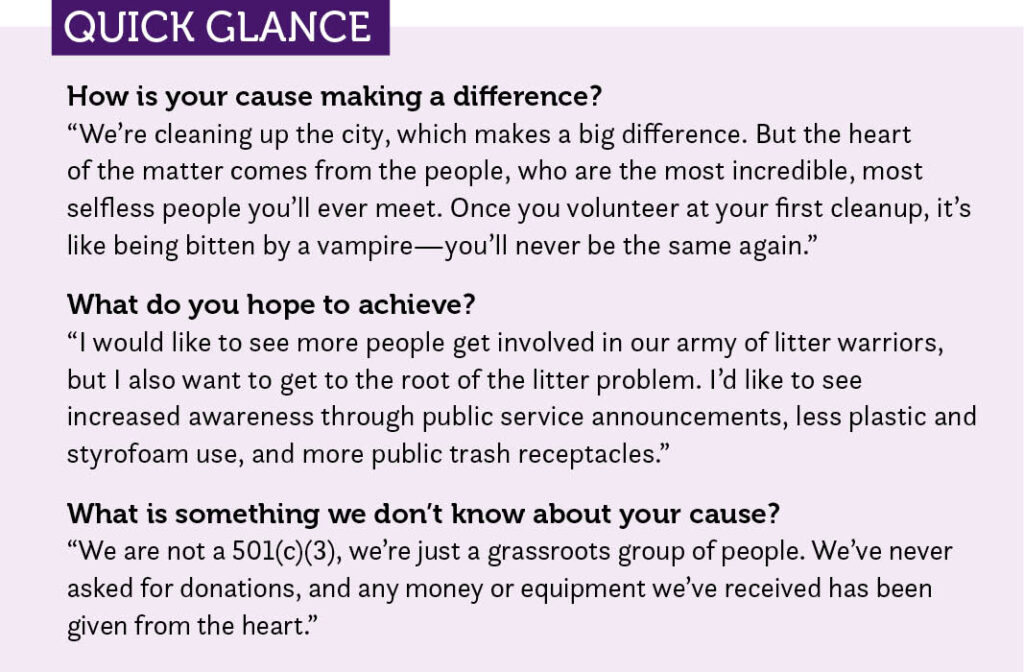