Women with a Cause 2022: Christina Carville

These days, Knock Out MS founder Christina Carville can look back at her life and remember incidents that read now as warning signs: numbness in her legs, tingling in her arms.

Then, about 15 years ago, her symptomatic oddities took a turn for the worse on a day spent tubing, when Carville’s now-husband leaned over their boat to discover her immobile and face down in the water. A hospitalization ensued, and then five more years of mild episodes until, in 2017, a year after the birth of her second child, Carville found herself barely able to speak or pick up a glass of water.

This time, thanks to neurologist April Erwin at Baton Rouge’s NeuroMedical Center, Carville finally received the diagnosis that would change her life: she was one of the nearly 1 million people in the United States living with multiple sclerosis, a disease of the central nervous system that disrupts signals to and from the brain.

“I didn’t want to believe it,” she says. “I have two small kids. I have a side business in interior design and event planning. I love my full-time job at Sherman & Balhoff Orthodontics, where I’ve worked since I was a freshman in college. I kept thinking that I was just too busy to be sick.”

Soon afterward, Carville became a District Activist Leader for the National MS Society for Baton Rouge, and had even appeared on Capitol Hill to speak as an advocate shortly before the COVID-19 shutdowns. But when budget cuts slammed the society and forced it to consolidate most of its Baton Rouge fundraisers into New Orleans, Carville decided to reinvigorate the local MS advocacy scene herself, founding the Knock Out MS Foundation in August 2020.

“Of course we all want to see a cure,” she says, “but realistically, our goal is to improve the quality of life for people living with the disease, whether it’s obtaining low-profile cooling vests for those of us who can’t get overheated, or handicapping bathrooms without them looking like hospitals. We don’t want people to have to feel embarrassed about the extra hoops they have to jump through to manage their symptoms.”

By leading the foundation, Carville hopes to destigmatize not just MS, but any “invisible illness.”

“When people tell me I’m strong for living through the pain I experience every day, I appreciate the compliment, but it’s not really a fair assessment, because it’s not a choice,” she says. “I’m just doing what anybody else would do. You get up and you do your best as a wife, a mom, a sister, a daughter. It’s not about being strong—it’s about continuing to live your life to the fullest.” 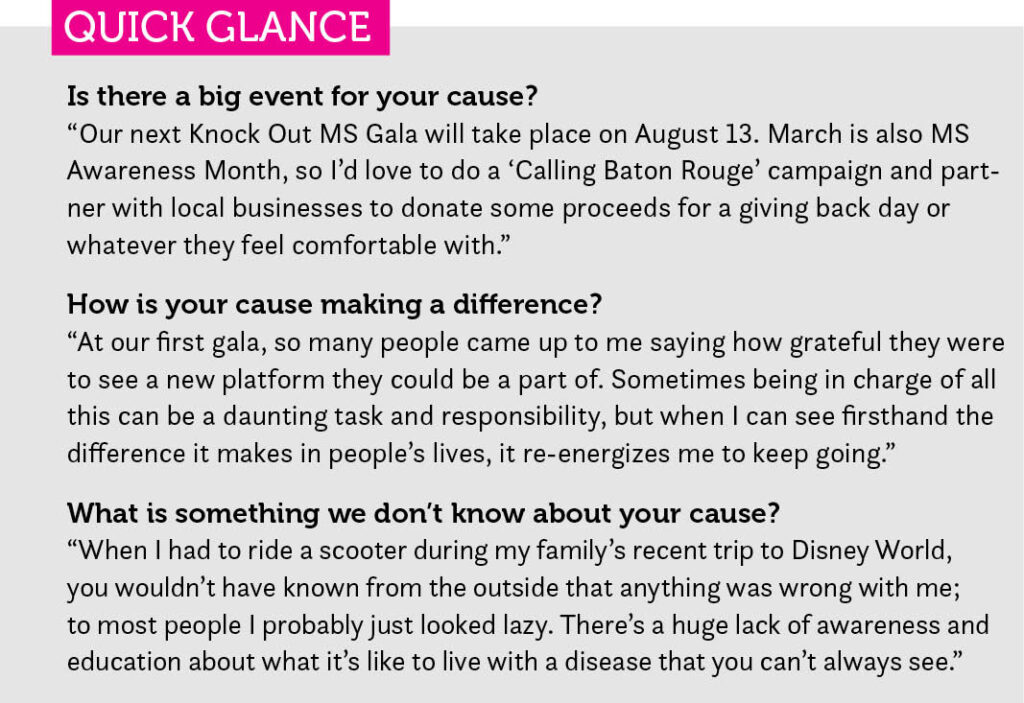