What a diva: Baton Rouge’s Lisette Oropesa is at the top of the opera world

Lisette Oropesa has had the kind of year where, if she wasn’t ready for it, it would have been impossible to keep up.

It’s her first day off in more than a week, and when the Baton Rouge-raised, New Orleans-born opera singer and her husband realize the latest Parisian metro strike means they might miss an intercontinental phone call, they know they have but one option to get to their apartment in time: Run.

“We’re cold because we’re sweaty. We’re in our running clothes, and we’d already run seven and a half miles, so, you know, what’s another mile?” Oropesa laughs.

It’s hard not to think that sense of adventure has helped Oropesa get where she is now, which at that particular moment meant preparing to star in Rossini’s Il Barbiere di Siviglia at the Opéra National de Paris. But in the past year, she’s also earned both the Richard Tucker Award and the Beverly Sills Award, two of opera’s top prizes. Her return to the Metropolitan Opera to star in Massenet’s Manon was applauded by The New York Times; critic Joshua Barone said Oropesa “slips into the title role as if it were custom couture.” 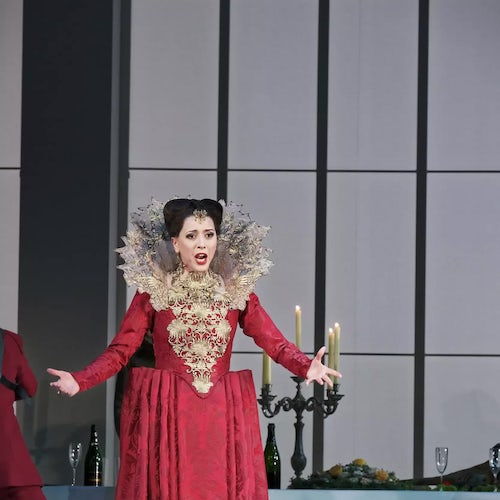 Oropesa has sung more than 100 performances with the Met in addition to appearing on stages around the world since graduating from the Met’s young artist program in 2008. Photo by Agathe Poupeney. 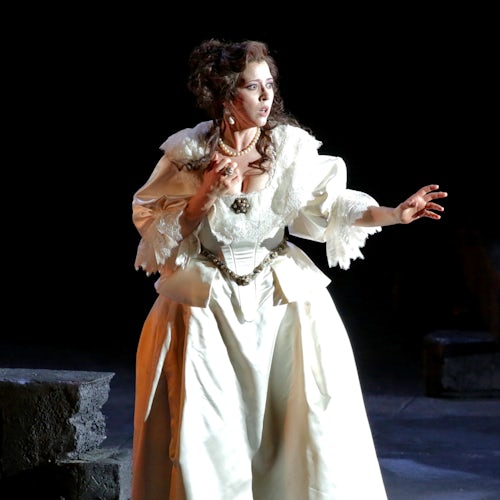 Some of her most memorable performances have included roles in (left) Les Huguenots at the Opéra National de Paris, (above) I Masnadieri at the Teatro alla Scala in Milan, (below left) La Traviata at the Greek National Opera in Athens, and (below right) Enchanted Island at the Met. Photo by Marco Brescia & Rudy Amisano/Teatro alla Scala.

Somehow, she also managed to get home to LSU to host master classes and perform at her alma mater.

“Her roots in Louisiana are very precious to her, as is her family,” says Robert Grayson, the LSU professor of voice who still serves as Oropesa’s vocal teacher, occasionally flying out to her performances and rehearsals to offer advice. “She really understands the struggle and working at all times to do your best, and that continued outlook is what has really helped her achieve the gift of her talents, which is just amazing.”

Oropesa’s path has never been linear. Her parents fled from Cuba to New Orleans, landing later in Baton Rouge, where Oropesa’s mother, Rebecca, also a soprano, is a music teacher. Despite Rebecca’s insistence that Lisette would make a talented vocalist, a teenage Lisette didn’t yet put her focus there.

“I actually didn’t like choir. I grew up disliking it, but I really enjoyed band,” says Oropesa, who played the flute. “I just liked the experience of being in band. Everybody plays a different instrument, so there’s a little bit more mutual respect.” 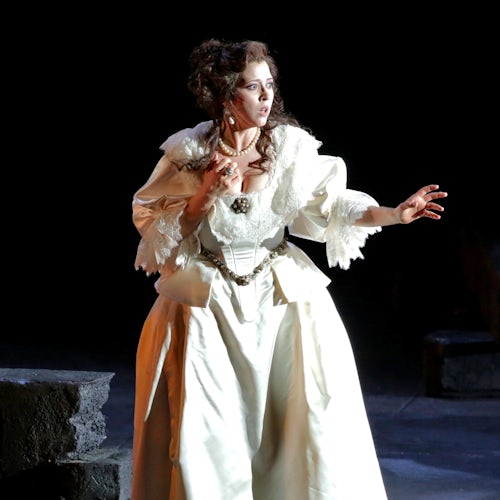 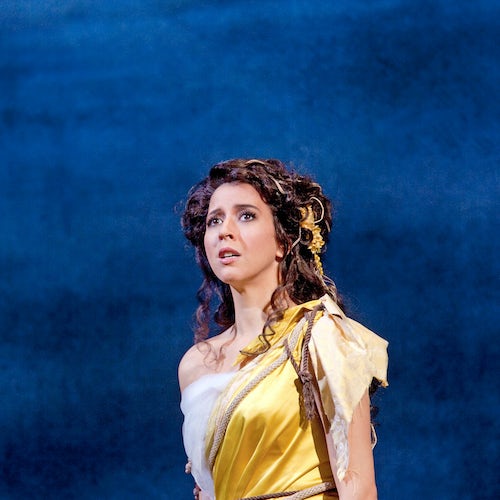 Before she graduated from Woodlawn High School, Oropesa was in the All-State Band, and when it came time to audition for LSU’s School of Music, she intended to take flute there, too. But her mother chimed in again, suggesting she audition for voice because opera combined all the things she loved: music, languages, acting and being on stage. Rebecca called in a favor with Grayson, who agreed to hear Lisette sing.

“She brought (Lisette) to my living room, and we did a little work and agreed she’d come work with me that fall for her freshman year while also double-majoring in flute,” Grayson recalls.

It didn’t take long before Lisette left her flute behind.

“I really started to fall in love with it, and it was like, flute has been really wonderful for me, but I think I can really do this,” Oropesa says. “I kind of let it go and started studying voice, and it’s the best thing I ever did because being a flute player helped me be a better singer, so I’m grateful it worked out that way.”

As she started to focus solely on voice, Oropesa started winning small competitions, which opened up opportunities and began to reveal a new path for her future.

“At the end of her sophomore year, I basically said, I believe if you do this, this and this, that we have a good chance of winning the Metropolitan (Opera’s National Council) auditions when you are a senior,” Grayson says. “We called it ‘The Plan.’ The stars aligned, and The Plan worked out exactly as we had hoped.”

Oropesa moved to New York to enter the Met’s program, landing her first major role there at 22 as Susanna in Le Nozzi de Figaro.

Eventually, though, Oropesa yearned for something more—and European theaters had started calling.

“It was like, the Met would hire you if you’d take role A, B and C, and I would rather sing role D, E and F, and not be at the Met for a couple of years and just wait my turn,” Oropesa explains. “The Met’s a really big house, and they have no obligation to hire anybody. They can hire who they believe is worthy at the time, and I have a light voice, I’m young, I was in no rush to go sing every role at the Met.”

And so Oropesa went abroad. She spent several years taking on the roles she wanted around Europe, learning more and more about her own voice and ability while she did so, until the Met came calling again.

Still, the role that brought her back to the Met—Manon—did come as a surprise. She got the call just nine months before going onstage, which, as she explains, “in opera terms, is extremely last minute.” At the time, Oropesa’s schedule was already promised to another production, but the company agreed to release her from the contract given how big the Met opportunity was for the rising star. Once the details were ironed out, she had one major task: learn a title role in a matter of months.

These days, Oropesa’s life is a matter of what she needs: rehearsing, running, keeping in touch with family and making the most of her limited free time with her husband, Steven Harris, who was a high school classmate of hers before the pair later reconnected on Facebook.

“Successful opera singers today don’t really fit the profile of what they may have 20 years ago—that idea of someone who is a diva, who always requires a lot of pampering and being looked after. Lisette is one of the hardest-working singers I know, and yes, she has a very natural talent, but that’s never enough to make it,” says Opéra Louisiane general director Leanne Clement, who was also a student at LSU’s School of Music when Lisette was studying there. “What has made her successful is her work ethic and her determination, and I can’t say enough about that.”

Oropesa speaks of her own packed schedule with love, calling it an “amazing, beautiful calendar,” but she and Steven still make a point to get back to Baton Rouge, where they keep a home, as often as is feasible; it’s important to Oropesa to find ways to give back not only to LSU but to any young artist who could use the direction and honest takes on being part of the opera world.

“I try very hard when I go to schools to give them a very frank, open, honest dialogue about what my experience has been … so there are as few surprises as possible,” Oropesa says. “I’ve been very open about that.”

It’s been important, too, for LSU music students to actually get to see what is possible.

“It’s very exciting and fun, and they can’t believe they’re meeting her, but it’s inspiring and it holds up a model of a way of working that … presents the possibility of succeeding at the level that she has,” Grayson says. Oropesa “was a very serious student, covering twice as much repertoire as was required during her degree, and that is the kind of dedication and focus it really takes to succeed at the highest levels.”

Though the rigor of Oropesa’s performance schedule will continue, she’s thankful for the work.

“I’m not wasting away my singing years,” she says. ”I feel like I’m in my prime, and it’s when the best things are happening for me, and I’m very happy for that.”