We tried yoga in the LSU Museum of Art galleries

The moment I turned the corner of the fifth-floor gallery, I found myself thinking, “Well, this is unexpected.” I began physically ducking under lines of laundry and watching a video of a man’s view from swimming in open water on a reel. Typically I don’t enter a yoga class and have to careen my way around clotheslines and vivid projections, so I knew I was out of my element.

But taking yoga out of its typical setting is exactly the point of the LSU Museum of Art’s “Yoga in the Galleries,” a series launched in September 2018 to welcome visitors to the museum in an atypical way. 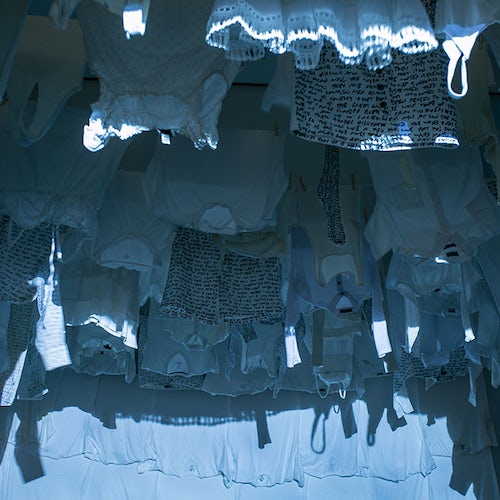 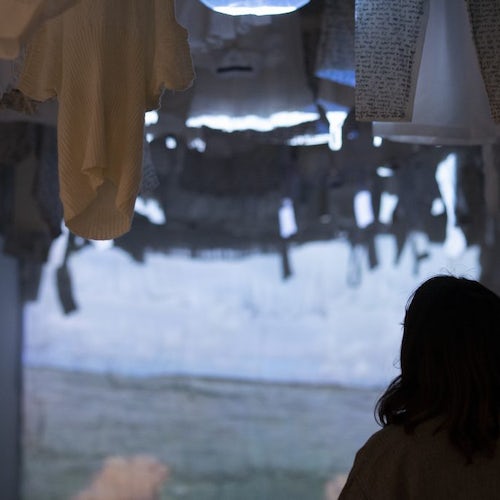 Malcolm McClay's 'Chasing the Invisible' shows his perspective of daily swims to Inishkeel, an island off the coast of his hometown Donegal, Ireland. Photo by Jordan Marcell.

This unconventional yoga experience kept the surprises coming. In the largest room of the museum was another projection by artist and LSU School of Art professor Malcolm McClay, a giant ladder-looking structure, and seven neat stations of stacked pillows, towels and eye masks over hand-woven blankets. I had to remind myself that I wasn’t at a spa, but about to exert an hour’s worth of physical activity on a Saturday morning.

The other yogis and I were greeted by Nedra Hains, LSU Museum of Art director of development & external affairs, and Uyuho “U-U” Eduok, yoga instructor with Yoga Bliss. They explained that we were standing in the middle of McClay’s exhibition at the gallery titled “Swimming to Inishkeel.” Our mats were facing the floor-to-ceiling video installation of McClay’s performance piece that showed the artist meditating in the middle of a bay that rapidly increased from low to high tide. In the video, he was perched on a self-built platform that he transformed into a 10-foot tower as the water level continuously rose over the course of six hours.

After a quick talk about the artwork, class began with setting our intentions; Eduok encouraged us to mediate about nonviolence and peace. The practice was an all-level flow designed for all bodies, ages and skill sets, intended to welcome everyone without any sort of intimidation. The class included blood-circulating sun salutations, balance work including tree, triangle, warrior 3, humble warrior and eagle,  as well as the much needed Savasana to close. When this event began last year, the LSU Museum of Art team only hosted a yoga “noontime nap,” but they soon expanded their offerings to offer a wider variety of yoga classes suited to any level.

I’ll be honest with you: I’ve taken my fair share of yoga classes in my day, but this was the most unique and visually stimulating setup. The graphics and mixed-media exhibition around us kept our eyes and minds busy the entire time and made it easy to flow from one pose to the next. Whether it was the video of the water or yoga in general, we somehow flowed as a class to the visual rhythm of the waves and Eduok’s voice.

Hains touched on the relationship between art and yoga by noting that “many yoga teachers and practitioners are also artists.” Yoga is an individual practice that strengthens the body by improving flexibility in an environment that allows the practitioner to focus on all possibilities. The LSU Museum of Art adds an art-filled atmosphere for meditation and creative expression that guides the yogi into this optimal environment. As Hains notes, “They are complementary practices.”

The next session will be held on Saturday, March 8, for $5 in the gallery displaying “Katrina Andry: The Promise of the Rainbow Never Came,” which includes large-scale color production prints and mixed-media installations. For more information, visit the event page here.