Theatre Baton Rouge brings couples together on stage and off

The Theatre Baton Rouge dressing room is usually filled with actors getting ready to take their place on the stage in performances of everything from Mathilda to Camelot to Cabaret. Hoop skirts, wigs and plenty of lipstick are common sights in the back room. However, on December 29, 2013, there was just one person getting ready for the spotlight: Jenny Ballard. The actress was preparing to walk down the aisle to wed her fiancé and fellow thespian, Kenneth Mayfield.

“We knew we wanted to get married at the theater,” says Ballard, who now serves as Theatre Baton Rouge’s managing artistic director. “It meant a lot. It was the merging of our lives together in Louisiana.”

The pair met in 2007 in Knoxville, Tennessee, but made the move to Baton Rouge in 2010 for Ballard to pursue an MFA in acting at LSU. Their relocation meant finding a new creative home for their shared passion for the stage. When Mayfield took a part in Theatre Baton Rouge’s 2011 production of Crimes of the Heart, both knew they had found the community they had been hoping for.

“It was such a wonderful experience,” Ballard recalls. “We both fell in love with the theater. It felt like home very quickly.”

That’s why when it came to their big day, the venue choice seemed obvious. Opting for a Christmas theme, the couple was able to utilize props and sets from past productions of A Christmas Carol. With the help of the entire Theatre Baton Rouge community, the big day came together flawlessly, creating a ceremony and reception that spoke to the couple’s shared love and the love of the community they had become a part of.

“We couldn’t have done it without the generosity of everyone,” says Ballard. “It was such a beautiful day.”

Ballard and Mayfield aren’t the only ones to foster a connection through the theater. The Theatre Baton Rouge team keeps a spreadsheet of the actors and technicians who have found love between curtain calls. Notes like “proposed on stage” or “1960s” fill the margins, speaking to the decades of special moments that have taken place alongside productions.

“It’s an open, loving and caring community,” Ballard says. “Theatre Baton Rouge has so many amazing stories of people coming together. There are so many genuine relationships, some that have lasted over 50 years.” 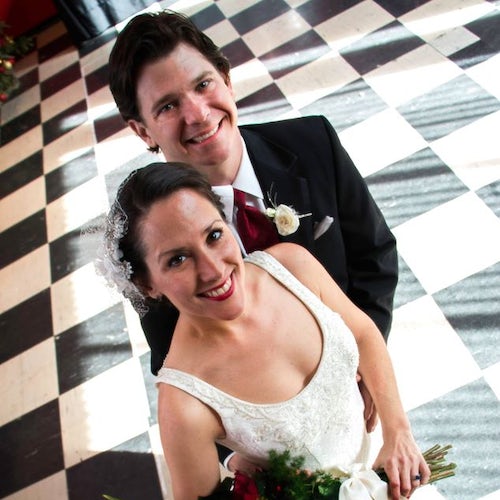 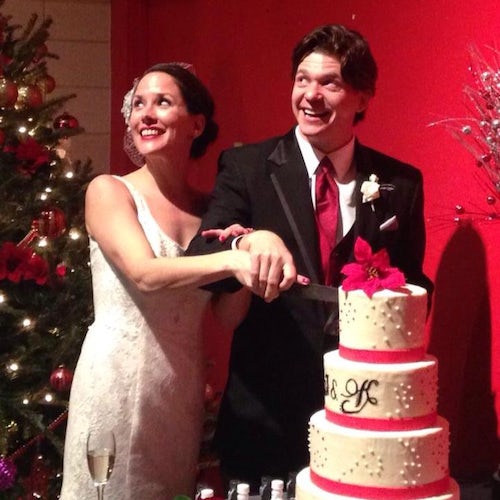 Ballard and Mayfield cut the cake in the theater's reception room.

This fact comes as no surprise to fellow performers. The process of preparing for a show includes hours spent in close quarters honing skills, perfecting talents and encouraging one another. Plus, those who utilize the stage as a creative outlet share strong passions and dreams backed by incredible talent.

“Strong and deep relationships form quickly when you’re working on a show,” explains managing artistic director Jenny Ballard. “The stage is a safe place to let down your guard.”

And as Theatre Baton Rouge moves into its 75th-anniversary year, the staff, cast members and everyone who has called the stage home over the last decades are looking to the joys of the past to dictate the future, regardless of COVID-19. The stage inside the organization’s Florida Boulevard building is one that will likely see more moments like the Ballard-Mayfield wedding in the coming months and years.

“You can go to New York but you don’t have to go there to have a fulfilling theater life,” Ballard says. “There is so much here. Kenneth and I didn’t just marry each other. We married the theater as well.”

Learn more about Theatre Baton Rouge and its coming performances and events here.