A confident stride? A dazzling smile, color or monogram embroidered on your sleeve? 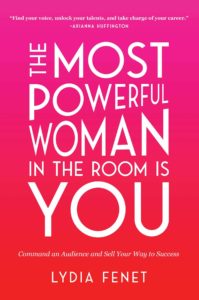 In her new book, The Most Powerful Woman in the Room is You, Fenet emphasizes the importance of figuring out some sign that lets everyone else know you’re here, and you mean business.

Over the past 20 years, Fenet has cracked that signature gavel and shattered many a glass ceiling, moving from intern at Christie’s into executive roles and her current post as managing director and global head of strategic partnerships.

For laughs—and good causes—she also reigns supreme as a top charity auctioneer there.

When Bruce Springsteen auctioned off his guitars at Madison Square Garden for the Stand Up For Heroes Benefit, Fenet ran the sale. In fact, she raised $1 million before The Boss even strutted onstage.

Fenet was inspired to write this book because she wanted to teach other women to overcome their fears and go after their own definition of success. “Anything in life is possible,” she writes, “if you see roadblocks as hurdles instead of barriers.”

Fenet grew up in Lake Charles, but her parents now live in Baton Rouge. An art fiend, she negotiated her internship at Christie’s by calling the head of the program daily until she managed to talk her way into an already-filled spot.

“I knew very few people when I first moved here,” she says. “While there were times that I was very lonely, it forced me to get outside of my comfort zone and meet people.”

Schmoozing is vital to success, she teaches. Louisianans excel at it. “Southerners, and people from Louisiana in particular, are the greatest networkers I have ever seen,” she says.

Fenet loves bringing her three kids home to Baton Rouge to visit. Her favorite things here include running the LSU Lakes and tailgating. “There is nothing quite as fun,” she says, “as a tailgate under the airplane by Death Valley.”