Michael Panther (right) and his team traveled to Kenya in July to distribute a new shipment of wheelchairs to children and adults whose disabilities range from spinal injuries to cerebral palsy. Many of the children had never had wheelchairs, so their parents had carried them everywhere. Photos courtesy living with hope

Born in South Sudan, Africa, during a civil war, Michael Panther was 10 years old when he became seriously ill. His life was saved by mission doctors in Kenya, but the illness left him paralyzed and dependent on a wheelchair to move around.

It was at a school for disabled children in Kenya that Panther saw a child crawling on the ground to get to classes. “That image was something that stayed with me,” says Panther. Even after completing high school in Africa and moving to the United States to attend college at LSU, he couldn’t forget what he had observed. It prompted him to found Living with Hope, a nonprofit organization that has supplied shipping containers filled with hundreds of wheelchairs to children and adults in Africa.

“Maybe that was the reason God saved my life, so I could go back and do this,” Panther says. “There was a reason and a purpose why I went through what I went through—to serve people with disabilities.”

Panther was healthy and full of energy until the age of 10 when a sudden illness left him weak and eventually unable to walk. His family didn’t know what was wrong, and there were no medical facilities in his war-torn country. He and his father made the difficult journey to the neighboring country of Kenya, where Panther was finally seen by mission doctors who diagnosed him with tuberculosis of the spine and saved his life. Two years had passed since he first became ill.

The American doctor who treated him arranged for Panther to attend high school and then college. In 2010, Panther moved to the United States, where he attended LSU and earned a degree in economics. While in college, he took on many leadership roles, serving as director of student outreach for Student Government and president of the International Student Association. He was also elected Homecoming King by the student body during his senior year in 2015, making him the first international student to receive the honor.

At LSU, Panther also founded the LSU Disability Student Organization. “The organization was a tool to advocate for [disabled] students to have a better experience at LSU,” Panther says. The experiences and skills acquired on campus prepared him for running a nonprofit, he explains. 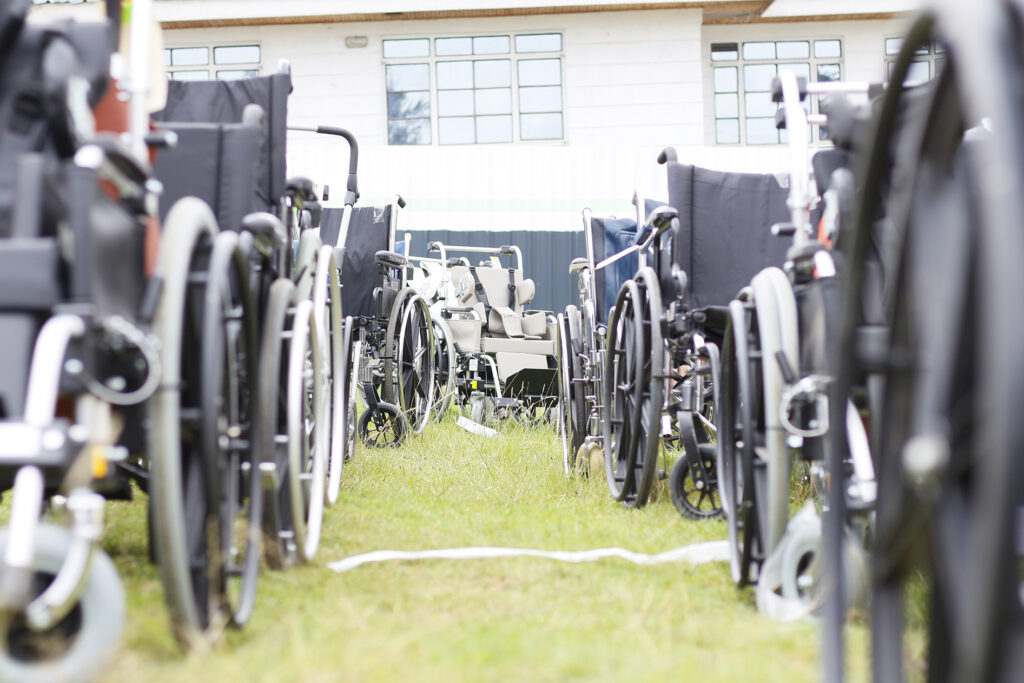 After graduating from LSU in December 2015, Panther moved to Chicago, and it was there that he created Living with Hope. In 2018, he made his first trip back to Kenya—along with a team of physical therapists, mechanics and support personnel—to distribute wheelchairs. The first distribution was at the hospital where Panther had been treated. He was also able to bring wheelchairs to the first school that he attended. “The conditions were still the same,” Panther says. “It was great and humbling to be back.”

Living with Hope has made several wheelchair distributions over the past few years, each one larger than the one before. Although travel was limited in 2020, Panther’s team had previously trained people in Africa on how to take care of the wheelchairs and make sure they were properly fitted. Panther set out to raise more money than ever, and shipped six containers, with 240 wheelchairs each inside, during 2020.

In July of this year, Panther was able to travel again with a team and provide on-the-ground support. “The need is still overwhelming,” he says. “We have so many kids lying on the ground, lying in the home. They don’t have mobility devices to go to school.”

Panther says he would like to continue to send wheelchairs, but he is also looking at the long-term sustainability of the effort. His goal is to build a factory within the next few years to produce wheelchairs in Kenya and bring employment to locals. “It would open a whole new opportunity there for people in Africa,” he says.