Mediterranean on the Mississippi: Locals preserve their Lebanese culture through cuisine

Normally, on a Thursday morning, Nelson Dakmak would be busy overseeing a multitude of home renovations and building projects around greater Baton Rouge through his business, Dakmak Construction. But today, Dakmak is funneling his well-established workaholic’s energy into a ritual that takes place every month or so. He’s in the kitchen preparing for Kibbeh Night, an evening of dining with family and friends who share a personal connection or deep appreciation for Lebanese cooking culture and its signature dish, kibbeh.

Dakmak, and other Baton Rougeans of Lebanese descent, grew up eating kibbeh, a labor-intensive dish made from ground meat, minced onions and spices that can be baked, fried or served raw. Dakmak spends hours preparing large pans of baked kibbeh, as well as perfectly formed loaves of raw kibbeh, or kibbeh nayeh, to a gathering horde of about 50 that will arrive later that evening. The group is invitation only and comprised of just men—there simply isn’t room for wives and kids—but Dakmak will make enough kibbeh to send his guests home with to-go plates for sharing. He prepares the main course, while others bring homemade grape leaves, cabbage rolls and tabbouleh, all staples of Middle Eastern cooking and common elements on the family tables of Baton Rougeans of Lebanese descent.

“I grew up eating all these foods, and so did my cousins and lots of our family friends,” says Dakmak, who has been putting on his kibbeh parties for about eight years. “This night has become really special. It’s a way we can get together and reconnect over these traditions.”

Like many communities across the United States, Baton Rouge has a notable number of residents of Lebanese descent. Lebanese immigrants began arriving in the United States in the middle of the 19th century, many of them Protestants or Maronite Catholics who were eager to start a new life in America. For the next hundred years, they settled all over the U.S. including in Texas, Florida and other parts of the South. Louisiana’s sizeable Catholic population could have been a draw for migrating Lebanese families who decided to make the area their home.

No matter how south Louisiana’s Lebanese community originated, it has always been robust. Its members are many and include well-known business people and community leaders. Local families connected over their common heritage, and held on to key parts of their culture. Many of them made a point of regularly attending the biannual conventions of the Southern Federation of Syrian Lebanese American Clubs, where families gather to dance, eat and visit.

Baton Rouge has an abundance of Lebanese restaurants, a far percentage higher than other cities of equivalent size, which has made lunchtime staples like shawarma, kebabs and hummus as common as po-boys and gumbo. But the best-kept secrets of Lebanese culture in the Capital City are the closely guarded kitchen traditions kept alive by its home cooks.

“Every Saturday night when I was growing up, my mother would be sitting there rolling grape leaves for lunch the next day,” says Joyce Westmoreland, whose parents emigrated to Baton Rouge from Lebanon in the early 20th century. “She’s been dead 55 years, and people still tell me they remember coming to eat lunch at our house on Sundays.”

Westmoreland, who is Dakmak’s aunt, grew up learning to prepare Lebanese foods, including a Lenten staple of rice and broken vermicelli cooked together and served with tart yogurt, or labneh, on top. Westmoreland jokes that the dish, a pilaf served in the Middle East for 2,000 years, is the original Rice-A-Roni.

Like her mother, Westmoreland passed on the tradition of rolling grape leaves to her three daughters, Lauren, Lisa and Leigh, who used to marvel at how fast their mother could deftly stuff pliable grape leaves with a meat and rice filling, tuck the edges and roll them into neat bundles.

Part of her advice to her daughters also included her mother’s warning that only one person should roll an allotment of grape leaves that will be cooked at the same time.

“She’d say ‘two people can’t roll in the same pot’ because one person will roll them tighter than the other and they’ll cook at different rates,” says Westmoreland.

While many families of Lebanese descent have been in Baton Rouge for more than a century, Dede Ferrara’s mother, the late Monie Sabagh, immigrated as a young bride to Baton Rouge with her husband, Saleem, who had family in nearby Hammond. Monie Sabagh had a reputation for being an incredible cook and hostess, says Ferrara.

“She put her heart and soul into her cooking, 100%,” says Ferrara. “Her food not only tasted good, it was also beautiful. When I cook those dishes today, I feel like she’s there with me in the kitchen.”

Ferrara grew up on tabbouleh salad made with fresh tomatoes, parsley and bulghur, fried cauliflower with tahini sauce, and lentils and rice, or mujadara. She learned to make these as well as many other meticulously prepared dishes including stuffed squash, shish kebab with garlic paste, and kofta, a kind of Lebanese meatloaf.

Like Cajun and Creole cuisine, Lebanese home cooking is highly personal. Each cook puts his or her own stamp on a dish with a secret combination of spices they’ll never fully reveal. Ferrara says her mother used lots of traditional spices in savory dishes like cinnamon and allspice. And along with fresh mint, Sabagh used loads of fresh cilantro well before it was a common kitchen staple. 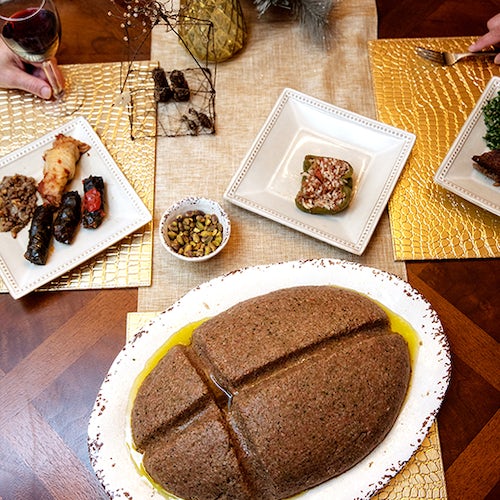 Raw kibbeh is a Lebanese delicacy not found in area restaurants. 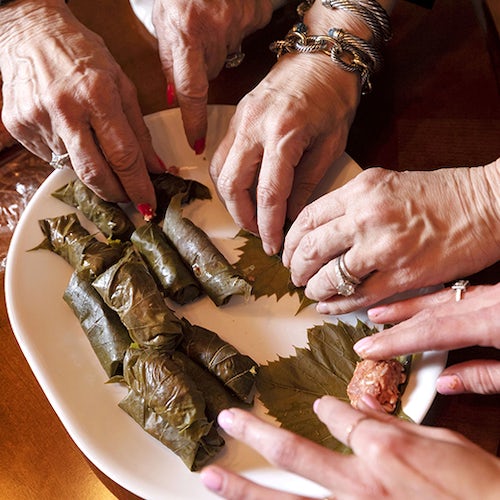 Kibbeh was also a big part of Sabagh’s home repertoire, and her ritual of making it included developing a close relationship with a butcher at Maxwell’s Market, says Ferrara.

“She would always say, ‘You have to know your butcher for kibbeh.’ She would ask that the meat for her kibbeh be ground first thing in the morning in a clean meat grinder,” says Ferrara. “The texture and cleanliness of the meat had to be perfect.”

It’s an important point that Lebanese home cooks agree on. Dakmak, in fact, grinds his own meat—beef top round—in a large countertop grinder, sending the meat through the grinder twice to ensure its consistency is perfect. He grew up eating kibbeh, but learned to make it with his cousin, Tommy Hannie, when the men decided they needed to keep the tradition alive. Dakmak keeps meticulous notes of not only how to make the kibbeh, but also who he has invited to his kibbeh nights for the last eight years.

Dakmak’s close friend and distant cousin, Jamey Crump, also of Lebanese descent, is watching over a large food processor on Dakmak’s counter. He’s overseeing the production of “slurry,” a puree of white onion, fresh mint, red and black pepper and fresh jalapeño. The slurry and softened bulghur are added to the ground meat for both the raw and baked kibbeh. The baked kibbeh is also assembled with layers of hashweh, a combination of sautéed ground beef, chopped onion, pine nuts ad spices.

With a few hours, nearly 50 close friends, family members and a clergy member or two will descend on Dakmak’s house, tearing into the loaves of baked and raw kibbeh and side dishes until every plate is clean.

“It’s like a bomb went off in here. Absolutely everything gets eaten,” says Dakmak. “I’m the kibbeh king.”

Try your hand at authentic Lebanese cooking with these recipes from Lauren Westmoreland Baronet.