Did you know that a rabbit’s diet should be 80% hay? How about that bunnies should be kept inside because they are sensitive to temperatures both hot and cold? These topics and many more are covered by the Magic Happens team in an online crash course that ensures adopters are up to speed on bunny care. Stock photo

It started in the back room of Petco in 2004. When Wendy Lincoln worked at the store, people would often come in hoping to “return” their pets, many of which hadn’t even been purchased there. Rather than turn them away, the staff would take possession of the animals, putting on display those breeds they did sell already and keeping the others in the back, waiting for someone to come in and ask about the pets.

“We didn’t sell rabbits, but they were commonly brought in,” explains Lincoln. “We would keep them in a back room, but I felt bad for them. I would take them home with me and try to find them homes.”

In November 2004, Lincoln officially launched Magic Happens Rabbit Rescue after single-handedly caring for the rabbits for many months. “That’s when someone asked to help me with it,” Lincoln says with a laugh.

Named for one of her own previous pet bunnies, the organization is a rescue group, not a shelter. There is no concrete location to house all the rabbits—and occasionally guinea pigs and hamsters. There are no paid employees and no drop-off spots. Instead, there is a small-but-dedicated network of volunteers who take in the animals one by one.

“We are 100% volunteer and foster operated,” explains Lincoln, who typically has just 5 to 10 rabbit foster homes and 4 to 10 foster homes for guinea pigs within her network. “We’re about family, about giving these animals quality lives. That starts in foster care.”

But with Magic Happens being one of the only rescues of its type in both Louisiana and Mississippi, the group is often overwhelmed by requests for owner surrenders. A waitlist is in place to preserve the foster care system and to prevent overrunning the group’s volunteers.

“The sad truth is that most animal controls don’t even keep rabbit food,” she says. “People just aren’t educated on rabbits: what to do with them, how to care for them. And that leads to problems.” 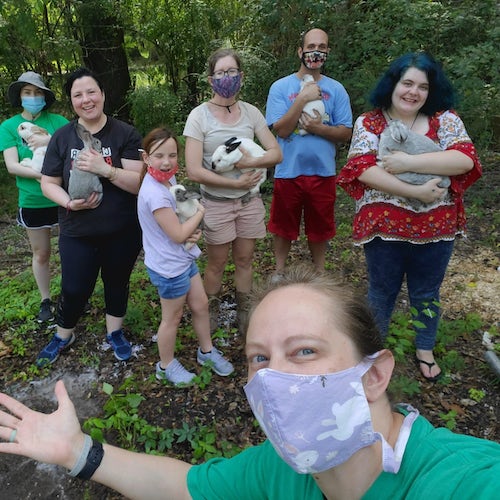 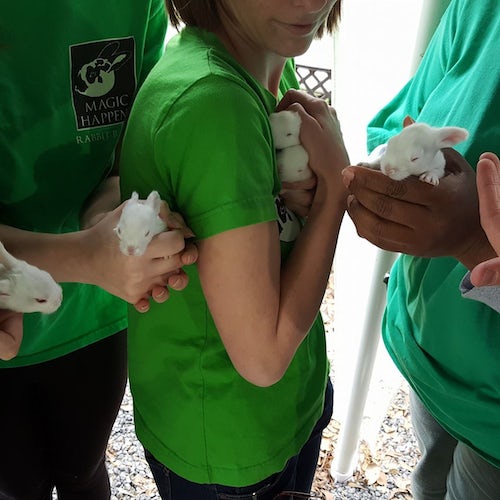 The number-one problem, of course, is that of failed “forever homes.” Rabbits are, unfortunately, common gifts. They are given to children who seldom have the time or attention to care for these fragile creatures and, even less often, the knowledge of how to properly handle them.

“More people know how to interact with dogs and cats, and that is so different from interacting with a bunny,” she explains, emphasizing that for most bunnies, it’s best to take a “look but don’t touch” approach. “They’re very body language-oriented. With so many nuances, they’re more of an exotic pet, even though people don’t think of them that way.”

But with the right education and outlook, a bunny can be a wonderful pet, even alongside other animals (Lincoln herself has 6 rabbits, 3 cats and 3 dogs). The Magic Happens team works with potential adopters to ensure not only that they are ready for the responsibility, but that they are matched with a bunny of the right temperament. This has stayed the same since the group’s start in 2004.

“Even back then, social media really helped us grow,” Lincoln recalls, noting that MySpace was the primary outlet at the time. “Especially with COVID, since we can’t do as much outreach, the internet is the primary way that people find out about us and find out about the animals that are waiting for their forever homes.”

All adoptable rabbits, guinea pigs and hamsters are listed on the Magic Happens website, along with notes on their personalities. These notes are crucial, according to Lincoln, because just as people are judged on their appearance alone on social media, so too are bunnies.

“Personality really trumps physical features,” Lincoln says. “I always urge people to come out and meet a bunny, even if it has red eyes. Give them a chance.”

Lincoln’s dedication to that mantra has kept her going all of these years. A total of 2,172 animals—and counting—later, she says the need is only growing but that her passion is growing alongside it. “Someone has to look out for the small guys,” she says. “They need us.”