In Tiger Stadium, a casual wardrobe of purple and gold—whether on a shirt, a summer dress, or even a pair of socks—occasionally gains the powers of a suit of armor. Protected by this uniform of fandom, game-goers gather each fall on the bleachers and parking lots of their home turf, absorbing the fellowship of color-clad comrades and repelling the jeers of opposing squadrons in crimson, maroon or white. Heralded by flags and brass, champion athletes charge the field, representing the reign of the SEC through the gold flash of helmets and the adrenaline of the crowd. Electricity in the veins numbs the earthquake rattle of feet on the benches. A throat sore from cheering trumps eardrums numb from the roar.

This, of course, is a home game. For many, it is simply home, the safest place to be for a Tiger blending in amongst a sea of stripes. There comes a time, however, when even the most loyal Tiger must leave the comfort of its hunting grounds. It’s a scary world out there, full of rolling tides and commodores, but two Baton Rouge entities are leading the charge in making the journey to an away game almost as fun as the destination.

Jim Dumigan Sports Travel, led by former banker, travel agent and LSU graduate Jim Dumigan, has been “putting fans in the stands” since 1982. Planning his trips at least one year in advance, Dumigan prides himself on cultivating high-class transportation (private train car, anyone?), accommodations, and party-planning expertise to turn any cross-country adventure into a traveling tailgate.

“Once, in Birmingham, we had a guy on our trip who was so into the game and the celebration that he ended up missing our plane back to Baton Rouge,” says Dumigan.

Partnering with Total Sports Travel, a company who also accommodates travel for schools like Alabama, Auburn and Florida, Dumigan has even chartered private planes to deliver a thousand LSU fans to their game-day destination.

“One of my all-time favorite trips happened a few years ago,” says Dumigan. “LSU was going to play at the Green Bay Packers’ stadium in Milwaukee. I had never been to Milwaukee before, but I made sure—since I plan in advance—to check out everything beforehand. We ended up renting out an entire hockey arena for a thousand LSU fans to hold a private tailgate party. Food, a DJ, everything. And right by the gates to the stadium. No one had to worry about traffic, and everyone had a great time.”

But what about the inevitable entrance into the majority crowd? What about those hordes of drunken Cheeseheads waiting to outnumber a lowly Tiger far from home?

“Actually,” says Jacques Rodrigue, owner of the Blue Dog Cafe in Lafayette and a frequent traveler with Jim Dumigan Sports, “I’ve always found the away-game environment to be really positive. LSU fans themselves are well known for being welcoming to opposing fans, and we bring that energy where we go. We get to talk to opposing fans, and even share tailgating meals with them sometimes. It’s never as good as Cajun food or Louisiana cooking, of course—but they try.”

It’s a sentiment echoed by Ali Duplessis Brooks, a representative for Traveling Tigers, the luxury away-game travel company born in partnership between the LSU Alumni Association and the Tiger Athletic Foundation. For her, the experience of away-game travel extends beyond the fans, stressing the impact a group of hometown faces can make on an anxious team of football players.

“Our travelers stay at the same hotel the players do,” she says. “When we welcome them and cheer them on when they arrive at the hotel to rest up for the game, we want our players to feel like they’re at home on the road.”

Just because a travel package is all-inclusive, however, doesn’t mean that it only exists to serve a particular group of LSU fans.

“People may assume that Traveling Tigers is something exclusive or unattainable,” says Duplessis Brooks, “but that’s not at all what it’s about. We want anyone to feel like they can support the team and have fun with friends and family this way. It’s our 35th year of business and we’re still excited to deliver each new away-game experience.” 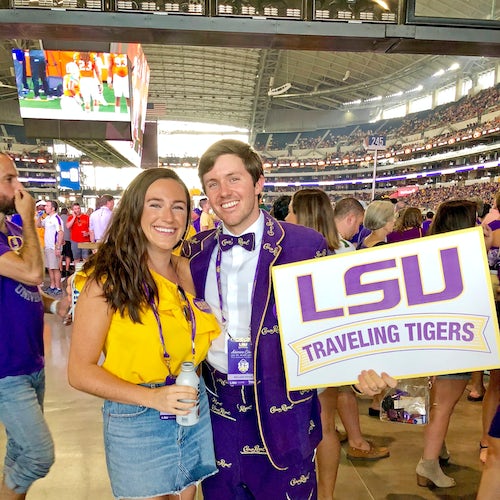 Kiley and William Pipkin show their true colors amid a sea of opposing fans. 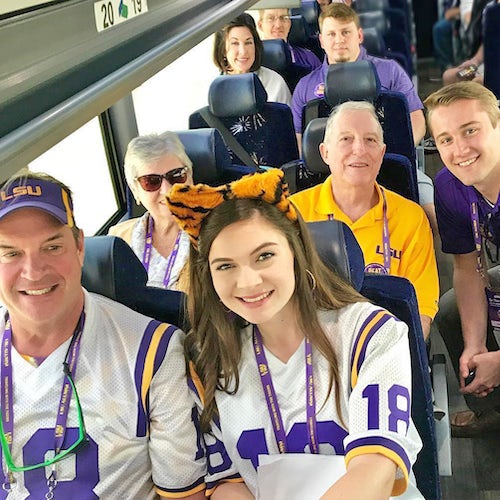 This month, Tigers won’t need to tread too far beyond the familiar jungles of football stadiums in the South, sharpening their claws for bouts against Mississippi State, Alabama and Ole Miss before the season’s end. The weather may be familiar. The accents, too. But it’s the volunteer forces flashing their stripes in the LSU section that will prove the old maxim of loyalty and pride: home is simply where the heart is. Especially if it bleeds purple and gold.