Fly me to the moon: LSU lands on the moon with the Tiger Eye 1 radiation detection device 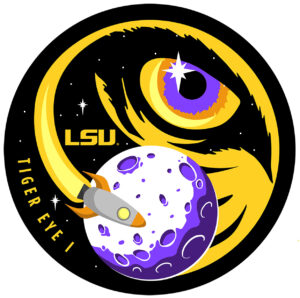 We’re all familiar with the distances traversed by technology in space: the New Horizons spacecraft beamed back our first photos of Pluto in 2015, NASA’s Perseverance Rover began its search for ancient life on Mars just last year, and even now, astronauts prepare for 2024’s Artemis program, the first crewed lunar mission since 1972. That “crewed” component is important. After all, behind all that distantly drawn data lies the map of a different type of journey—an inward one, fueled by imagination conjured not by calculations, but by the humans who make such calculations possible.

The imagination of a team of LSU students paid off last month when, thanks to the leadership of assistant professor Jeffery Chancellor in the Department of Physics and Astronomy, NASA selected its Tiger Eye 1 radiation detection device for the manifest of its Intuitive Machines 1 mission, part of an initiative to bring technology to the lunar surface. The iPhone-sized device, created “to make future space travel safer for people and equipment by providing insight into the complex radiation environment in space,” makes LSU the first university in the world to put its tech on the moon, and also showcases the surprisingly right-brained regard that contributed to its win.

Case in point: no space mission is complete without a symbol, especially if it comes from a graphic designer double-majoring in religious studies.

“The imagery is all about how LSU is overlooking the mission and helping the world protect astronauts from harmful radiation when they visit the moon,” says Katie Hostetler, who worked on the device alongside fellow students Haley Pellegrin, a newly graduated LaSPACE Undergraduate Research Fellow and member of Chancellor’s Space Radiation Transport & Applied Nuclear (SpaRTAN) lab, and Jacob Miller, an electrical engineering major who builds new devices for medical applications in the LSU College of Engineering and the Roger Hadfield Ogden Honors College. “Jeff didn’t want any kind of hidden message—he didn’t want the mission to represent him, but rather the university as a whole. This is an accomplishment of LSU.”

But the exploring won’t end there. The data collected by Tiger Eye 1 will contribute to the proposed reality of establishing a more permanent human presence on the Moon, particularly if its rocky surface is to act as a stopover on the way to Mars. It will also continue the SpaRTAN lab’s research into “improving radiation shielding in both materials and design,” ensuring safer space travels for generations to come.

The IM-1 uncrewed lunar landing is scheduled to take place in 2022 in anticipation of the Artemis program, which will land the first woman and first person of color on the moon.

“If you look back at the old Apollo days, most of those flight engineers and flight controllers were in their mid- to late 20s. They were simply given a job and had to come up with creative solutions,” says Chancellor. “That’s what I hope to accomplish, and it’s what we’ve accomplished already thanks to Jacob, Katie and Haley’s fantastic work.”