When Ralph Waldo Emerson helped introduce Eastern spirituality to the West in his poem “Brahma” in 1857, few Americans could say what the word yoga even meant, let alone be found om-ing in lotus pose. But the times have since caught up with the old Transcendentalists, and tens of millions of Americans now use yoga as a jumping-off point for a practice of mindfulness and meditation. “This is a good time in the world for people to be practicing meditation,” says Leela Yoga Lifestyle co-founder Brittany Roberts, who began her study of yoga 12 years ago in a quest for improved mental health. “It’s practiced in a lot of other cultures, but we’re still not quite there yet in America. And many yoga teachers say that it’s actually a necessity; it’s a basic human need.”

The practice of meditation—while a skill that can be taught and learned—is largely an exercise in “divine play,” and one that Roberts enjoys sharing with newcomers at weekly workshops and free outdoor yoga sessions at venues like Tin Roof Brewing Company and Jolie Pearl Oyster Bar downtown. Consequently, she’s got plenty of tips on how beginners can learn to slow down, find their center, and focus on what really matters. 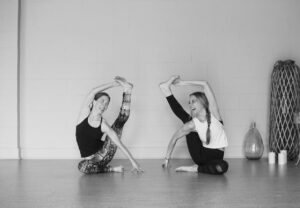 “When you first start meditation, you just want to find a good seat,” she says. “It’s traditional in the Eastern cultures to sit on a floor, but you could be in a chair or against a wall—just make sure you’re upright and all your joints are soft, meaning that there’s a slight bend in every direction.”

Roberts notes that finding a comfortable posture may take some experimentation at first, but that practitioners should stick to just one during a meditation session to limit distractions. That plays into the second step: stillness. 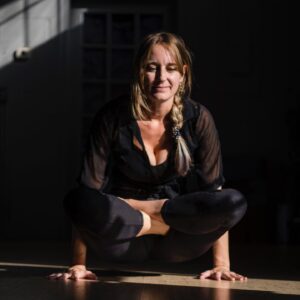 “The body and the mind are communicating with each other all day without any conscious effort on your part, so if you’re trying to still the body and find that your foot falls asleep or your ear starts to itch and you give into that distraction, that’s OK. Just find your posture and start over again,” she says.

The third step involves finding a focus, whether it be on a physical movement like the cycle of breathing, or a short repeated mantra like “Let go.” Guided meditation apps can also be a good place to learn how to notice distractions and return to focus, as can simply taking in the sounds of the surrounding atmosphere. Then commit to that focus for the duration of the meditation, and don’t be ashamed if the mind begins to wander.

“A lot of beginners worry that they’re ‘not doing it right,’ but it doesn’t matter if you start over a million times in a meditation—it was still a successful practice,” says Roberts, who suggests starting with a five-minute meditation session each day and building up to 20- or 30-minute sessions in the morning, when the mind is unencumbered by the day’s events. “Over time, you’ll notice that the things that are bothering you, whether physically, mentally or emotionally, will pass. You learn to let go. It’ll do wonders for your patience and anxiety, and in just helping you be aware of how your mind operates.” 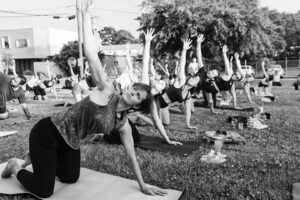 The best part of all: even a teacher of meditation remains its lifelong student. No one is ever done learning.

“It might look different in different phases of your life, but just five minutes a day can really start to change you,” says Roberts. “That’s one reason why we branded Leela as Leela Yoga Lifestyle in the first place, because it’s a lifestyle and a practice that you’ll do forever.”

For more on Leela’s workshops, instructors and events (including its 200-hour yoga teacher training course beginning in August), check out leelayogalifestyle.com, and follow Leela on Facebook and Instagram @leelayogalifestyle.