Fitness and the feast: Healthy lifestyles extend from yoga mat to table

Nicole Williamson leads a Tread to Table workout at L'Auberge. All photos by Jenn Ocken.

On an early September morning, before the heat of late summer started steaming off the Baton Rouge pavement, an unlikely gathering took place on the rooftop terrace of L’Auberge Casino and Hotel. Attendees didn’t bring money for slot machines or poker tables, but they did pick up yoga mats on their way in, chug a water bottle or two, and maybe twist a hairband around an impromptu ponytail. 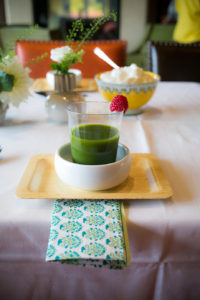 The meeting was the fourth of its kind, but this time it welcomed new faces and looked out onto a new landscape, having happened before at an old record shop, a mechanic shop and a New Orleans art gallery. Even the breakfast spread—fresh-made paleo frittata with sausage and kale, parfaits, quiches and coconut yogurt—seemed more intriguing than ever. Tread to Table, a joint effort between local businesses TreadBR and Magpie Cafe that combines exercise and healthy eating, likes to keep things a little unpredictable.

When Nicole Williamson founded the boutique fitness studio TreadBR four years ago, she had already seen a swath of different fitness trends in cities like London and New York, where she worked for Burberry and a denim showroom thanks to an Ole Miss degree in fashion merchandising. She also obtained certification to teach Pilates and soon grew interested in the intersection between fitness and business, two hobbies she had fostered all her life. So when she and her husband, natives of New Orleans and Baton Rouge, respectively, moved back to the Capital City, she knew right away that something was missing from the slate of usual fitness offerings.

“I love to spend a Saturday morning exercising—hopefully with some friends—and then getting breakfast or coffee or juice somewhere. That usually means Magpie, since they have such healthy choices,” says Williamson. “But I feel that in general, there aren’t a lot of healthy weekend options for community fitness or food in Louisiana. We certainly have some communitywide races, but if you’re not a runner, it’s easy to just feel like one of a thousand. There isn’t a lot of intimacy or interaction.”

Williamson figured that she couldn’t be the only person who enjoyed a good workout followed by a meal with friends, so she set out on a mission to create just that.

To help round it all out, she called on a couple of old friends, Magpie owners James and Lina Jacobs.

“They had opened around the same time that TreadBR opened, when I was still commuting to Baton Rouge from New Orleans,” Williamson said. “During the weekday, if I wasn’t at work and I wasn’t headed home, I was probably at Magpie.”

The partnership between the two businesses seemed as natural as their owners’ lifestyles. Once Tread to Table came to fruition, Lina and James agreed to create a new, energy-replensishing breakfast for each unique session.

“We make everything at the cafe and then bring it down to wherever the new Tread to Table event will be,” Lina says. “James and I go and set up the table and food, the place settings, the flowers, and then break it all down again.” She says she and her husband hope to be present at future events, even with the recent opening of their second Magpie location downtown.

“I just don’t do the workout,” says Lina, laughing. “But it’s certainly reaffirming to see all these faces enjoying our food and company over and over again. We definitely try to mix it up for them, and we always make sure to have plenty of paleo, vegan or dairy-free options for anyone who might be sticking to those types of regimens.”

Part of the allure of Tread to Table, says Williamson, is that its format prevents typical fears of competition from getting in the way of having a good time. “Everyone is just there to better themselves or make a friend. No one’s trying to make it across the finish line,” she says. “Mostly they’re just trying to make it to breakfast!”

Her most recent class, though, managed to bring out a few happy tears in some of the attendants. After the August flooding devastated so much of Baton Rouge and its surrounding areas, she decided to let guests sponsor flood victims by allowing them to attend the L’Auberge event free of charge.

“Right before the breakfast, one of the ladies stood up and just said thank you for the morning, the break, the friendship, the support,” says Williamson. “Her family in Denham Springs had lost everything in the flood. And I’m telling you, there was not a dry eye in the room. It’s just so nice to see that person feel better, even for a moment.”

Williamson says she wants to take TreadBR—including its Tread to Table breakfasts and other pop-up events—all over the state, and eventually all over the South. She already has plans to teach special TreadBR classes in Shreveport, Jackson and Dallas in the near future.

“There’s no reason that big cities like New Orleans or Houston should have these things first,” she says. “We’re a capital city, and we should really be able to do healthy, cool things here.”

To learn more about upcoming Tread to Table events, check out treadbr.com.