Discovering ‘Downton’: Locals hop across the pond for a firsthand look at the film and TV home

The much-anticipated Downton Abbey movie has arrived on Baton Rouge screens and is the subject of a lot of conversation among fans of the film’s focus on an early 20th-century British noble family and their castle staff. Cathy McHugh of Zachary and Paula Watts, formerly of Baton Rouge, have an up-close perspective on the story’s lush setting, thanks to their recent visit to the famous location.

The two women became friends when they both taught in the East Baton Rouge Parish School system at Zachary High School and traveled together years ago to Europe as chaperones with teachers and students from the school. In August, McHugh asked Watts if she would like to travel to England with her, and Deborah Owen of Veranda Horizons Travel Agency set up an itinerary for the two and booked their nonstop flight from New Orleans to London. The ladies stayed in London, toured the Victoria exhibit and state rooms at Buckingham Palace, visited Kensington Palace and Westminster Abbey, and took day trips from Victoria Coach Station to Windsor, Oxford and Highclere Castle, where both the TV and film versions of Downton Abbey were shot.

“The most imposing thing about Highclere Castle is driving up the long lane and seeing the Jacobethan-style country house sitting in the middle of 1,000-plus beautiful acres,” recalls Watts. “Visitors enter the home through the main entrance where the Earl and Countess of Grantham and staff at Downton Abbey greeted their guests.”

Once inside, McHugh and Watts were able to wander at their own pace through the main rooms, second-floor bedrooms, and downstairs rooms and kitchen area, with docents standing by around the building to answer questions. “However, the tour guide on our coach was quick to remind everyone that Highclere Castle is the home of the current Earl and Countess of Carnarvon, not a movie set,” Watts says. “Family pictures and mementos are scattered all about the rooms. The library, dining room and great hall where the Christmas tree stood in the series were filmed exactly as they are decorated today.”

Watts and McHugh peeked with interest into the three upstairs bedrooms marked as Lady Edith’s room, Lady Sybil’s room and Countess Cora Crawley’s room. “Touring the home, we were able to see the intricate details of the entrance, ceilings, walls and hallways of the home that are not as obvious on screen,” Watts says. “It is truly beautiful.” 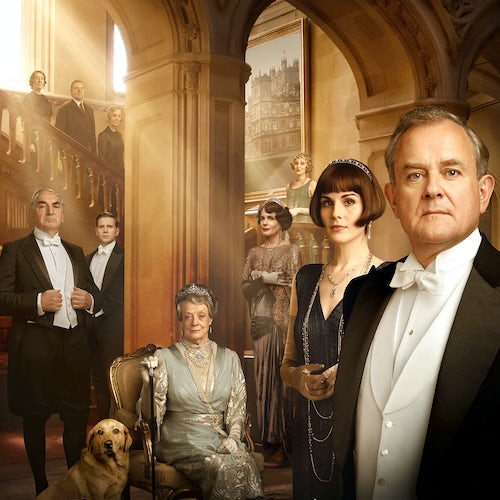 This poster for the new "Downton Abbey" movie reveals the castle’s grand architecture. 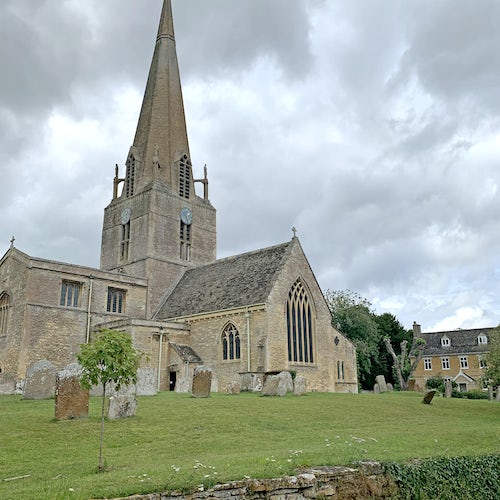 Watts and McHugh visited St. Mary’s Church in the village of Bampton. The church was the setting for many weddings of major characters during the "Downton Abbey" series.

The women learned that all of the kitchen scenes and staff scenes were filmed at a studio set in London because the hallways were too narrow and the ceilings too low downstairs at Highclere to fit all of the necessary production equipment. After touring the house, guests were welcome to walk the short distance to the gardens and the lake or even to have tea in the courtyard overlooking the grounds.

The travelers were each given a copy of the book Lady Almina and the real Downton Abbey: The Lost Legacy of Highclere Castle by the current Countess of Carnarvon, Fiona Carnarvon. Watts observes that after reading the book about the 5th Earl of Carnarvon, “we realized that the story lines in Downton Abbey often mirrored the time period of the 5th Earl and Countess of Carnarvon at Highclere. The castle was used as a hospital during the war. It was also a popular venue for hunting and was visited by the King and Queen.”

The 5th Earl of Carnarvon, Watts also learned, was credited with the discovery of King Tut’s tomb, and there is currently an exhibition of Egyptian artifacts at the castle. 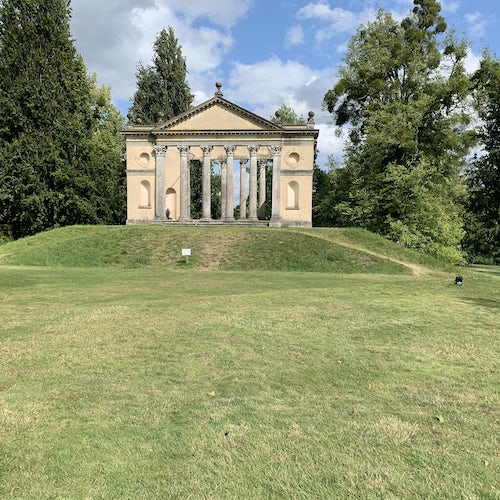 The 1,000-acre grounds of Highclere are home to several of its founders’ “follies,” including this architectural feature called Jackdaws Castle that was built in 1743 to resemble a classic symmetrical temple. 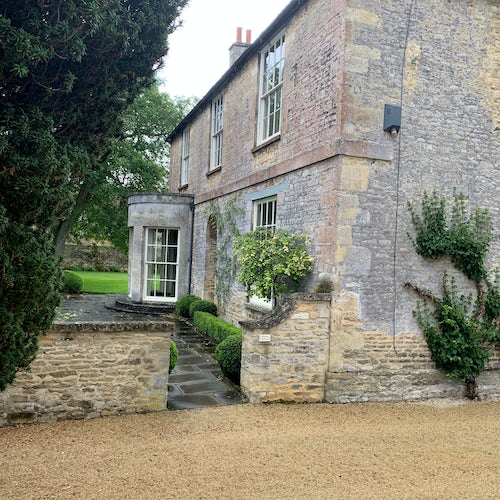 The village appears to be a short walk from the castle in the television series but is actually about a 45-minute drive away, the ladies discovered. Here, at quaint Bampton, called “Downton” in the show, was where scenes of the pub, festivals and Cousin Isobel’s house were filmed in about a two-block area surrounding the local church used in many of the episodes.

“We were very happy to be in England during a time that Highclere was open,” Watts says. “Even the dreary weather and rain in August did not dampen the experience of Highclere and Bampton village.”