A league of her own: A.J. Andrews knocks it out of the park

This article originally appeared in the April 2018 issue of inRegister.

Since 1957, the Rawlings Gold Glove Award has been handed out annually to some of the best players in Major League Baseball—well, mostly to the best players in Major League Baseball. In 2016, A.J. Andrews, the former outfielder famous for her diving catches for the LSU Lady Tigers and current professional player for the Houston-based ScrapYard Dawgs, became the first woman in history to achieve the coveted recognition. Andrews, at just 23 years of age, had bested the best of the boys’ teams.

“It was definitely something that proved we were just as good as the boys,” says Andrews. “It’s a big deal to be included in the conversation with male players, and not just placed in my own separate category—to be right there with everyone else.”

Andrews, after all, has been working to make a name for herself as an athlete for her entire life. Growing up in Florida, she tackled every opportunity to compete, whether sprinting down soccer fields, leaping for basketballs or tearing up the track field.

“It was actually my mom who inspired me to take up softball,” Andrews says. “She played on a co-ed team, and I used to watch her games when I was little. So when she suggested I give it a go myself, it was natural for me to want to try.” 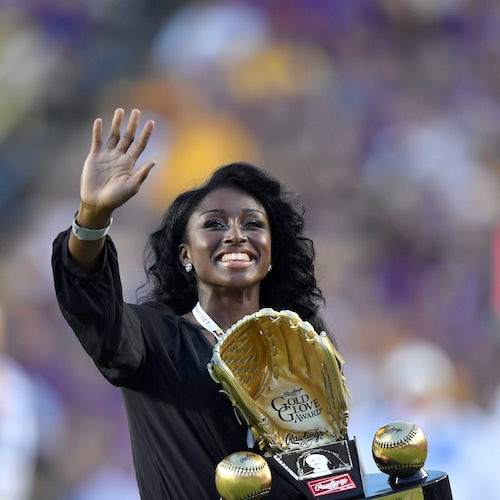 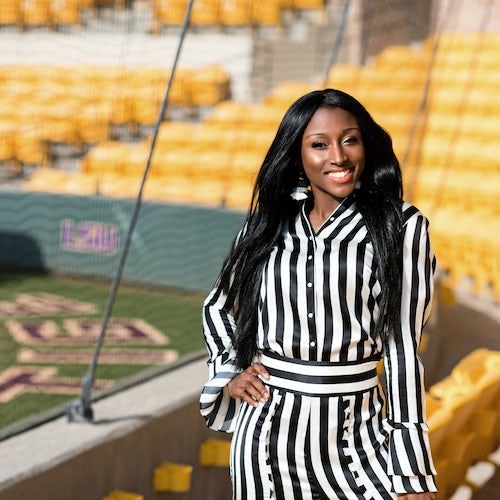 Andrews ended up falling in love with the game, citing its social aspects ideal for a teenager wanting to express her athleticism while still hanging out with friends and teammates. Not that softball should ever be considered “easy.”

“There’s a misconception that softball is somehow not as difficult as baseball,” says Andrews. “In reality, it may actually be more difficult, because of its faster pace and quick reaction times.”

Andrews’ former LSU coach, Beth Torina, remembers her as one of the toughest players she’s ever known.

“A.J. has the best work ethic of any player I have been around, and I have been around many great ones,” Torina says. “She plays fearlessly. She believes she can hit anything and catch any ball on the field, and she carries herself that way.”

Even now, Andrews continues her training schedule here in Baton Rouge in the midst of a nearly yearlong recovery from a labral injury to her hip—perhaps just another notch in the staff for a player of her caliber. The year Andrews caught enough attention to garner the Gold Glove, she had been playing with a broken hand.

“Athletes can be extremely hard-headed,” she says. “Sometimes it got really rough, and if the pain became too much, I knew how to stop myself, but I wasn’t going to let being hurt prevent me from my success.” 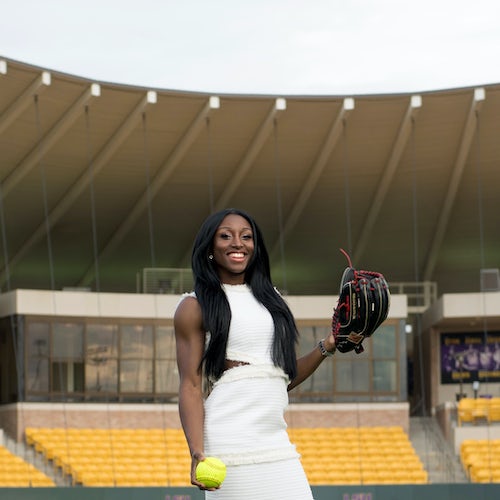 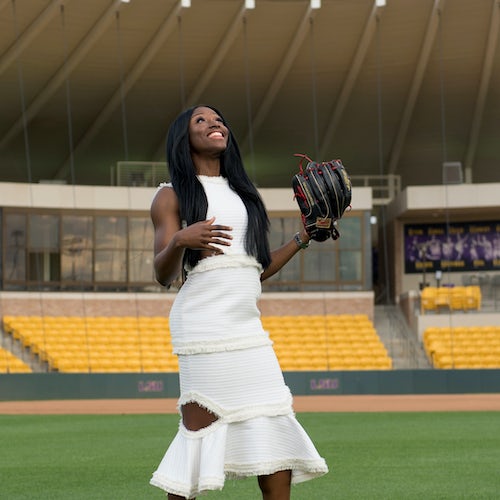 It was this do-or-die attitude—one that Andrews likely shares with her younger sisters Aliyah and Athena, a sophomore softball player at LSU and a newly signed player for Florida A&M University, respectively—that helped Andrews rise to the head of the pack in the first place.

“Traveling the country with my travel ball team is how LSU ended up seeing me for the first time,” she says. “One of their scouts happened to be walking by while I was making a diving catch at a game, and that one moment determined my future. It’s why I always say that you have to keep working your hardest, no matter what—you just never know who could be watching. If I hadn’t dived for that one ball, my entire life would be different. It’s really helped shape me into the person I am today.”

As a professional softball player, Andrews recognizes every opportunity to live her dream as a precious gift, but life on the inside of a small group has forced her to use her voice to speak out when things go wrong. She is a vocal advocate for gender equality in sports, a realm that has traditionally leveraged its highest praise and paychecks to men.

“We don’t get paid like professional baseball players do,” she says. “The average salary for a professional softball player is only $6,000 for the whole season, so most girls you see on these teams have to work extra jobs, usually as coaches for collegiate Division I teams.”

Andrews is also aware of the harm caused by a simple lack of visibility in her sport.

“If we can put women in sports on the same sort of pedestals we put men on, I think women’s sports would grow exponentially in popularity,” says Andrews. “Because the sad thing is that softball still isn’t as recognized as it should be.”

After winning her historic Gold Glove, for example, Andrews attended the awards dinner and sat down as an equal with all the male winners. But at the end of the day, she says, there are still a lot of people who don’t know that professional softball exists.

“If you don’t know that professional softball exists, how are you going to know that a woman has just won the Gold Glove?” she says. “In the softball world, it’s an extreme feat that is—and should be—celebrated, but elsewhere it still goes neglected and unnoticed, and that’s what needs to change.”

These days, Andrews works hard on and off the field to be a role model for young girls, working with nonprofits like Play Like a Girl to help mentor and build confidence in talented young women. But she has ambitions to help kids on a local level as well. This month, Andrews will continue to lead an initiative to establish a Little League softball program in Baton Rouge, something she feels will be a necessary step toward introducing people to the game.

“There are travel ball teams that exist here,” she says, “but when you’re young, you fall in love with a sport because you have fun playing it. If you jump into a sport and are told immediately that you have to win, I think that could really drain a kid and burn them out of the sport before they even get started.”

Having attended conferences like the ESPNW Women + Sports Summit, Andrews knows the importance of working to keep girls in sports. A woman, she says, shouldn’t be criticized for being proud of her physical strength and sportsmanship.

“When girls feel like they can succeed somewhere and have fun, it just makes them want to work harder and showcase their talents,” she says. “But it starts with having fun. And I want to help bring that to Baton Rouge because this city has given me so much over the years. Anything I can do to give back and be a part of a growing love for softball is definitely something I want to focus on.”

In the meantime, Andrews is also pursuing a master’s degree in mass communication at LSU, preparing for a future where she could work as a sports broadcaster or an on-camera talent, so that she can remain in the world of sports even when she exits the role of a softball player. But even bigger things may be on the horizon for this athlete at the top of her game.

“Softball is going to be back in the Olympics in 2020, and I would love the support of the Baton Rouge community when team trials begin this December,” says Andrews.

Although the Olympics may seem like the ultimate step for any pro athlete, Andrews is just getting started.

“The Gold Glove was just a barrier that hadn’t been broken down yet, and maybe opening this one door will open many doors,” she says. “If we continue to knock on them, to allow more people to feel comfortable knocking on them, then eventually they will.”