Pairing meats with fruits may not always seem like an intuitive option while cooking, but for apples and pork chops, their union is a match made in heaven. (Just ask Peter Brady!) In this recipe, Aimee Broussard takes the classic cut and pairs it with herby, slightly tangy flavors to bring out the sweetness of fall’s favorite fruit. Keep reading to see how to recreate it at home. 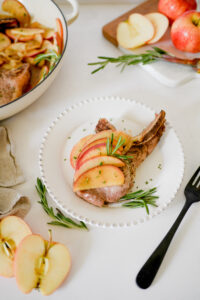 Trim pork chops of excess fat, and season both sides of chops with salt and pepper.

Add 1 Tbsp. olive oil to a large heavy-bottomed pan or large skillet, and heat over medium-high heat. Add pork chops to pan, leaving at least an inch between chops to ensure even cooking and browning. Sear for 3 to 5 minutes per side or until pork chops are mostly done and a golden sear has formed. (They will continue cooking in the sauce later.) Remove chops to a plate.

In a small bowl, whisk together chicken broth and Creole mustard; set aside.

Add remaining olive oil to pan, then apples and onions. Cook for 5 minutes, stirring occasionally. Season with rosemary and thyme as well as additional salt and pepper. Stir to combine.

Pour in broth mixture and use a wooden spoon to scrape bottom of pan to release any brown bits. Add pork chops back to pan, nestling them in among apples.

Cook for 2 to 3 minutes, until pork chops are finished cooking and liquid has reduced by half.