Toadstools. Fairy rings. “Death baby” fungi. For centuries, the humble mushroom has obtained downright magical status in pop culture throughout the world, an uncanny cousin to garden-variety crops and plants we frequently find in grocery stores and on dinner tables—despite the fact that mushrooms seem to propagate just fine in our own backyards, and require no plowed fields or complex irrigation to grow. That’s precisely the reason why Maggie Long and Cyrus Lester—the cultivating couple behind Mushroom Maggie’s Farm in St. Francisville—decided to enter the business back in 2016, spurred by their previous careers as produce buyers for Whole Foods and their desire to better fulfill their community’s need for local produce.

“We didn’t want to step on any toes in the farming industry, and we realized that no one else in the area was really tackling mushrooms,” says Long. “It didn’t require any huge land holdings or startup capital, so we were actually able to start with one of my small tax refunds in a room in Cyrus’ mother’s barn.”

Even after a fire halted their progress in 2017, Long and Lester rebuilt, and by 2018 they were back to selling full time to restaurants and to patrons of the Red Stick Farmers Market, where their fruiting blocks—basically chunks of growing material made of locally sourced sawdust and soybean hulls—are especially popular, especially for parents looking to teach their children more about homegrown food. Their unexpected setback couldn’t have been more fortuitous; as anyone who follows an exorbitant amount of food bloggers can tell you, the fungi frenzy was just beginning. 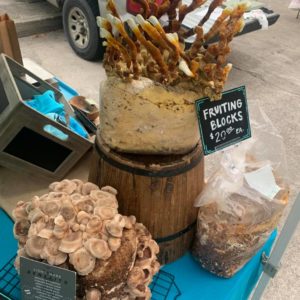 “Mushrooms have definitely been on the rise in the food scene,” says Long. “We were seeing a rise in interest before COVID, but after COVID we saw a huge rise, especially in the African American community. A lot of people decided to start going vegan during the pandemic, and of course with the price of meat going up, people seemed to be turning to mushrooms more and more in cooking.”

Although not much of a home chef herself, Long says that she’s been finding more inspiration recently by seeing what local chefs have been able to do with her assortments of funky fungi. 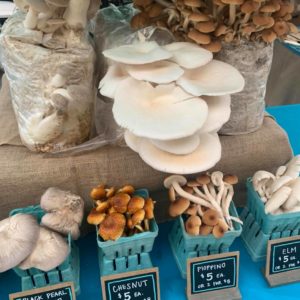 “Mushrooms are a great meat substitute,” she says. “Varieties like king trumpets and lion’s mane are very popular, as are black pearl oyster mushrooms, which are meaty but not as tough as something like a king trumpet. A lot of restaurants will even make ‘scallops’ out of king trumpets, since they look and taste just like them.”

Considering that some of the mushrooms grown and sold by Mushroom Maggie’s Farms today descend from a specimen plucked from their own property, we’d say that the trade in toadstools has a long life ahead.

“Cyrus and I both have such passionate personalities, and there’s no way I would be able to do this without him,” says Long. “It definitely takes a bit of craziness to get into something like this. A little madness. But we just went with it, and we’re happy to see the things we grow being used in our own city.”

Stay updated with Mushroom Maggie’s Farm via Facebook, or take your pick of produce every Saturday at the Red Stick Farmers Market.