Home cooking with the chef behind Eliza and JED’s Local

Running two popular Baton Rouge restaurants doesn’t stop chef Russell Davis from taking time to cook dinner for his family. Three or four nights a week, you can find him peering into his home fridge or kitchen garden and concocting spontaneous meals for his wife, Sally, and their two teenagers, Charlotte and James.

“On weeknights, it’s something really simple, like throwing (proteins and vegetables) on the grill, tossing them with a little olive oil and finishing with salt and pepper, and maybe mixing in pasta or some couscous or something like that,” says Davis, who credits an expanded support staff at his eateries for allowing him to spend more evenings at home. “On Sundays, when Eliza is closed and JED’s is open only for lunch, I like to do a slow braise or a beef stew, or red sauce.”

The Davises balance running Eliza Restaurant and JED’s Local with the long list of obligations that families with active kids know well. To combat the frenzy, they’ve put a lot of thought into their culinary home life. The do-it-yourselfers renovated the kitchen of their Old Goodwood house in 2021, the same home that Sally and her five siblings grew up in. 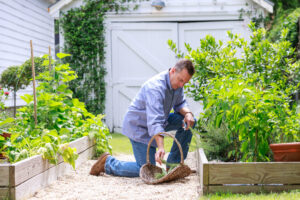 The new space, outfitted with cool mint green walls, white quartz countertops and a white subway tile backsplash, features a large square island used for both prep and casual dining. It’s a peaceful refuge that leads to a back patio and kitchen garden overflowing with herbs, flowers and seasonal vegetables.

“We grow enough herbs to supply the cocktail program at Eliza,” Sally says. At the moment, the Bocage restaurant’s bar uses fresh mint in its Eliza Greyhound, and basil and mint in its cucumber basil mojito.

The garden’s vegetable patch includes cherry, roma and slicing tomatoes, cucumbers, peppers, squash, eggplant and other heat-loving crops. The veggies are helped along by a new addition of flowers this year, deliberately planted to draw pollinators, Sally says.

It’s common practice to send the kids to the garden in the evening to harvest what’s fresh, the couple says. Tomatoes are used for making homemade pizza, while squash and eggplant are usually roasted. The family’s annual bumper crop of cucumbers is prepared in all sorts of ways. Russell makes endless jars of pickles, he says, and often serves raw cucumbers cut into sticks with rice wine vinegar and chopped herbs.

For more on Davis (including tidbits on some of his favorite finishing salts), check out the full article from the July 2022 issue of our sister magazine, 225.