Pam Cannatella is not from Sicily. She proudly proclaims her heritage as IBM—Italian By Marriage. Her husband Grant Cannatella is fourth-generation Sicilian in Louisiana, and together they run Cannatella Grocery. Pam is the face of the unique Italian shop on Government Street in Baton Rouge, and Grant mans the production kitchen at the original location in Melville, which was founded in 1923.

“It was the original superstore,” Pam says of the place now affectionately known as “The Old Store.” She used to work behind the scenes as the bookkeeper and is now immersed in day-to-day operations, commuting back and forth from Melville in a delivery van splashed with the Cannatella logo.

Born with the Sicilian cooking gene fully intact and his great-grandfather Giuseppe’s Italian sausage recipe committed to memory, Grant makes all the sausages and prepared foods that fill the shop’s refrigerator and freezer displays. “My husband is the cook. He is a fabulous chef! I say he has a magic spoon. As Italians, this is how they show their love. I think it’s in their DNA,” Pam says. “He makes tasso and boudin, too. He created his own olive salad and Cajun seasoning.”

Partnering with local producers is another element of the Cannatellas’ success. They have stuffed artichokes and mushrooms from New Orleans and a selection of Louisiana craft beers. For the wine enthusiast, Pam prides herself on her almost 100% Italian wine section. 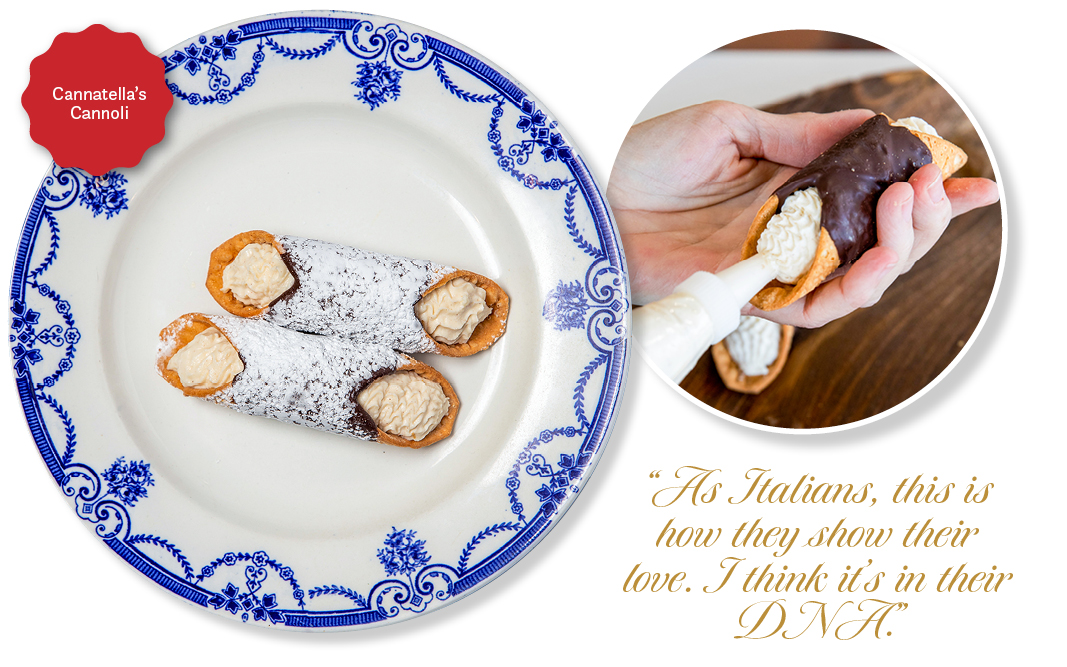 Stepping into Cannatella Grocery is equal parts going back in time and waltzing into a sparkling specialty shop. The wall space is a patchwork of memorabilia photographs and artwork with a Louisiana accent. The store is organized with neat shelves housing everything to create an authentic Italian meal at home and a king’s ransom of olive oil—pure liquid gold—on display. Hunting for San Marzanos? Cannatella carries a selection of the sought-after canned tomatoes. And if Stanley Tucci talks about it, Cannatella will likely be stocking it.

“The funniest thing happened,” Pam says. “A year ago, I got a call for guanciale and responded, ‘I’m sorry, we don’t have that.’ When the second inquiry came the next day, I researched what is guanciale (an Italian cured meat product made from pork jowl or cheeks). With the third inquiry that same day I finally asked, Why is there a sudden demand for guanciale?”

The answer was Stanley Tucci’s TV series Searching for Italy and his recipe for rigatoni all’amatriciana (rigatoni with guanciale and tomatoes). Guanciale is now in the illuminated refrigerator case across from the shelves of San Marzanos, unless of course the other shoppers have raided the supply. Pam Cannatella keeps her eyes on Stanley Tucci so she can plan her orders accordingly. “If Stanley talked about it, people wanted it.” She credits Tucci for putting guanciale on the Baton Rouge map.

For those who aren’t planning to turn a basket of imported ingredients into a gourmet meal in their home kitchens, Cannatella has the solution with a selection of Grant’s magic- spoon dishes. “People come in here, they want a good home-cooked meal,” Pam says. “They take it home or to friends who are sick or who had a baby. Lasagna is our No. 1 seller. We have meatballs and red gravy, red beans with sausage, chicken and sausage gumbo. We make fresh pasta three times a week. He makes this vegetable beef soup that people rave about; they think it will cure anything. The soup sales doubled for the month of January compared to last year. The word is out.”

The deli counter at the back of the shop serves cannoli, two styles of po’boys, muffulettas by the whole or half, and a sandwich lovingly named Porchetta Pete for Grant’s late father. On Mondays, the special draws throngs of hungry customers for a $5 muffuletta quarter served with a side of Pam’s homemade pasta salad. She partners with Mario Lozanov from City Gelato to create the perfect cannoli, which are filled to order. “Mario makes our cannoli filling and sources our shells. We’ve tried some other ones to cut costs, but they just weren’t as good and the customers noticed. These are like a waffle cone tube dipped in dark chocolate,” Pam says.

Steve Circello runs the register up front and serves as Pam’s right hand. “I don’t know what I’d do without him,” she says. “He grew up in Melville and worked at the original store when he was in high school. After retiring from his job with the state, he came to work for us. He helped me open this store. Grandpa Pete reunited us,” she says, gesturing to the framed portrait of Pete Cannatella. “If I start talking about my father-in-law, I’ll start crying. He’s still here—he watches over us. We love our neighborhood. We know our customers. It’s a really nice place to be.”