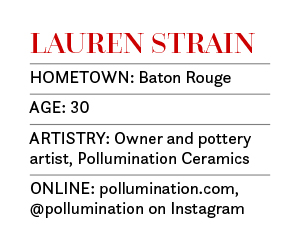 Paw after paw tiptoes quick across the top of the backyard fence. It’s a high-wire act at full speed. “Oh, yeah,” says Lauren Strain, smiling as she glances out of her workshop window from her seat at a long white table loaded with radiant pots, mugs, candles and vases. “That’s either Blackjack or Cash.”

The Baton Rouge native is in the middle of her own balancing act as a creative entrepreneur, and she’s just been reminded of her first real artistic endeavor as a teenager. Armed with a thrift store camera, Strain made a film portrait of her cat as a freshman taking photography at Runnels.

“Seeing that first photo developing, it felt like magic before my eyes—I absolutely lived with my camera in high school,” says the founder of Pollumination—a clever portmanteau of pollination and illumination.

Strain is inside the former shed her contractor father built out into a studio. Having a dedicated space for her creativity has changed everything, she says, though she does still paint some in the house, she admits. While her adventurous 2-year-old naps, she’s studying a prismatic image of a hummingbird, its pattern of breast feathers rainbow-wild. The artist will be using an iridescent glaze and a color palette inspired by the tiny flying wonders for her newest line.

“There’s inspiration everywhere,” she says. “All around us.”

A few years ago, having returned to Baton Rouge from Ohio, Strain was pregnant and confined to a desk job she hated. “It paid the bills, but I’d be sitting in my cubicle just drawing things and daydreaming, I was so unfulfilled,” she says. 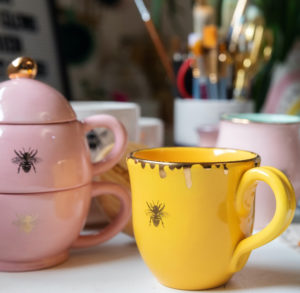 The former portrait photographer toiling in the medical field then had an actual dream about combining a candle and a planter with a bee theme. “Nothing like that has ever happened to me,” Strain says. “Later, after a long night of brainstorming and prayer, I returned to that initial inspiration.”

In November, she launched Pollumination eco-ceramics online and joined with the Pollinator Partnership to give a portion of her proceeds to the nonprofit that promotes the health of pollinators and ecosystems through conservation, education and research.

Strain hand-paints and glazes a variety of bisque blanks with her own designs, and in May British Vogue featured a colorful row of them.

Sales have been strong even through the pandemic. She’s been leaving local pickup orders on the porch for customers, but she has plans to finish her workshop with a small retail space later this year.

Throughout, the brand has allowed her to combine all of her passions and experiences into one focused career.

“I can see how I learned all the different pieces and parts to this along the way,” Strain says. “Photography, graphic design—I even started out studying environmental science, and that’s where the pollination comes in. I just feel like I’m doing what I’m made to do.”